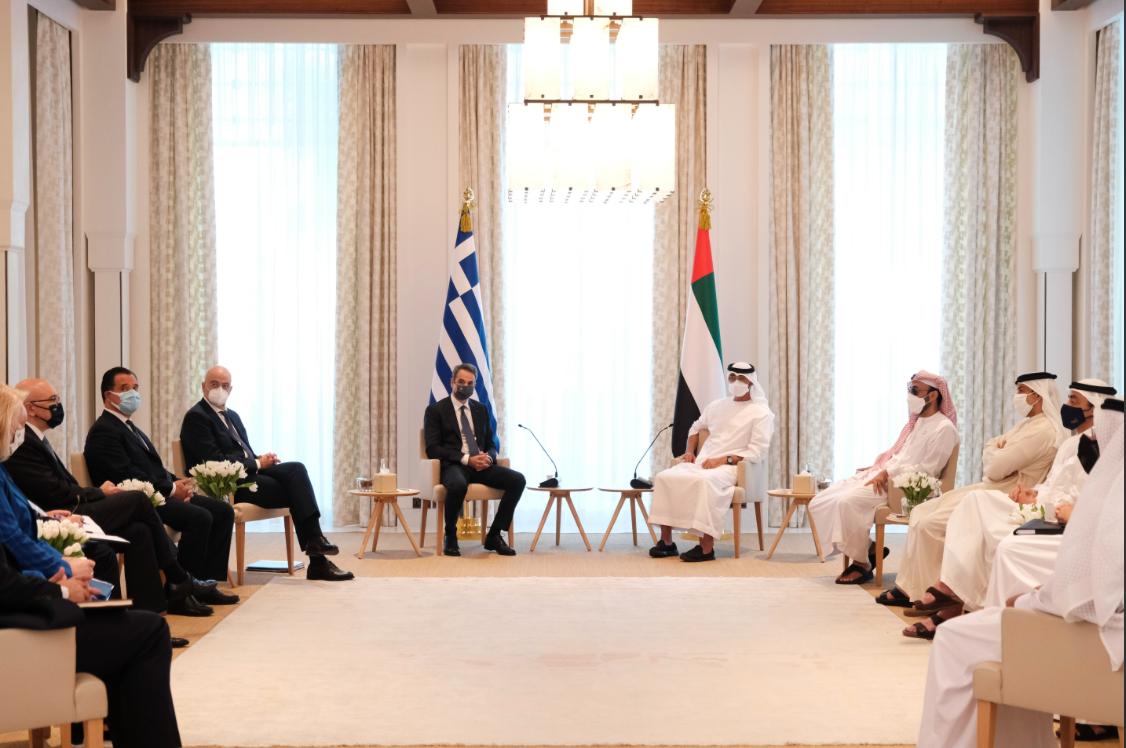 The United Arab Emirates (UAE) welcomed Greece’s head of government for an official visit yesterday. The two states signed a foreign policy and defense agreement as their mutual tensions with Turkey in the Mediterranean Sea continue.

Greek Prime Minister Kyriakos Mitsotakis visited Abu Dhabi on Wednesday and signed a “strategic partnership” and an “agreement on joint foreign policy and defense cooperation,” he said in a tweet. UAE Crown Prince Mohammed bin Zayed Al Nahyan met with Mitsotakis. Nahyan said on Twitter that the UAE and Greece established a partnership on political, economic and cultural cooperation.

Neither countries’ Foreign Ministry has released details on what exactly was in the agreement. The two leaders discussed terrorism and Turkey’s actions in the region at the meeting, according to the Greek news site Greek Reporter.

His Highness Sheikh Mohammed bin Zayed Al Nahyan, Crown Prince of Abu Dhabi and Deputy Supreme Commander of the UAE Armed Forces received His Excellency Kyriakos Mitsotakis, Prime Minister of the Hellenic Republic, on November 18, 2020, in Abu Dhabi. The two leaders met to discuss further strengthening and expanding the solid bilateral cooperation between the two countries based on the close ties of friendship and the common understanding of the growing challenges in the region that call for further coordinated action. On this occasion, and building on the significant steps already made towards advancing bilateral relations, both leaders have officially launched the Comprehensive Strategic Partnership between the United Arab Emirates and the Hellenic Republic, aiming at result-oriented exchanges, initiatives, and joint action in key areas of mutual interest.

The two governments stress their unwavering commitment to international law and the UN Charter and the principles enshrined therein as the foundation of peace, security, good neighborly relations and peaceful resolution of disputes for all countries in the region. In this regard, the Abraham Accord signed between the United Arab Emirates and Israel on the establishment of relations constitute a historic accomplishment contributing to peace, stability, and mutual understanding among the peoples of the Middle East. The two governments affirm their commitment to the principle of non-interference in the internal affairs of states, underscoring the necessity of coordinated action among the international community to counter ongoing regional interference and uphold respect for the sovereignty of states.

The two governments condemn Turkey’s violations of the sovereignty and sovereign rights of the Hellenic Republic and the Republic of Cyprus, as well as its overall aggressive conduct in the Middle East, Southeast Mediterranean and South Caucasus in blatant violation of international law and recall the obligation of all states to abstain from the threat or use of force as reflected in the UN Charter. In this vein, the two governments call upon Turkey to conform with international law and immediately cease all of its illegal and provocative actions.

Aim of agreement to contain Turkey

As seen above, Greece and the United Arab Emirates slammed Turkey’s destabilizing behavior in the Eastern Mediterranean region.

In the joint statement issued during Prime Minister Kyriakos Mitsotakis’ visit to Abu Dhabi for talks with Crown Prince Sheikh Mohammed bin Zayed Al Nahyan, the two sides condemned Turkish violations of the territorial integrity and the sovereign rights of Greece and Cyprus, as well as Ankara’s aggressive behavior in the Middle East, the Southeastern Mediterranean and the South Caucasus region, describing it as a blatant violation of international law.

“The two governments condemn Turkey’s violation of the sovereignty and sovereign rights of the Hellenic Republic and the Republic of Cyprus, as well as its overall aggressive behavior in the Middle East, the Southeastern Mediterranean and the South Caucasus, in flagrant violation of the International while recalling the obligation of all states to refrain from the threat or use of force as provided for in the Charter of the United Nations,” the statement continued.

“In this spirit, the two governments call on Turkey to respect international law and to immediately cease all illegal and provocative actions,” the joint statement added.

The UAE has already been trying to geopolitically corner Turkey, due to the geopolitical conflict between the two countries. This can be seen through the UAE’s alliance with France.

The Middle East is of great significance to France in this respect as well. French President Macron’s viewing of the recent explosion of huge magnitude in Lebanon as an opportunity in this regard and his efforts to project influence in regional politics by employing France’s “soft-power” tools could also be interpreted in this manner. But there stand two major obstacles in the way of Paris: the first is the nations of the region, and the second is the strong winds blowing in Middle Eastern streets in favor of Turkey and its president, Recep Tayyip Erdogan.

The French support for the UAE, which has been providing support to the notorious putschist General Haftar’s militias in Libya, as well as the agreements the two countries have sealed, have served to escalate the crisis with Turkey. This constitutes the major reason behind the convergence and alignment of France and the UAE in opposition to Turkey in the Middle East. The alignment, which had started with the British withdrawal from the region in 1968, has intensified recently. On June 3, they held the 12th session of their annual “Strategic Dialogue” meetings. At the meeting, senior officials from the Abu Dhabi and Paris administrations expressed their desire to strengthen bilateral relations and approved a 10-year roadmap they charted in order to “deepen the strategic partnership”.

The UAE’s signing of a peace deal with Israel is a further sign of this.