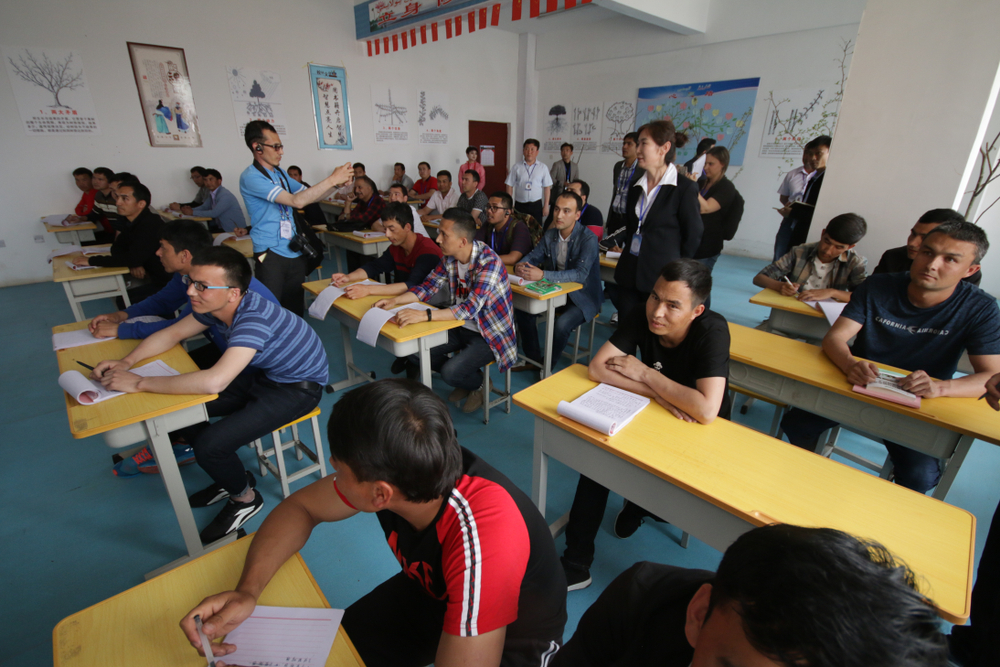 China’s minority Uighur population in Xinjiang are predominately Turkic-speaking Sunni Muslims who live primarily in the autonomous region of East Turkestan. Islam arrived in the region in the 10th century. Uyghurs embraced Islam in 934 during the Karahanid Kingdom. Kashgar, the capital of the Kingdom, quickly became one of the major learning centres of Islam.  This has infuriated China’s communist atheist government, who in recent years have tried to assimilate the Uighurs by force through concentration camps.

In recent years, there have been many reports of students, teachers, and civil servantshave been forbidden from fasting during Ramadan, forbidden from wearing their traditional dress and even keeping a beard.

As of 2017, the Uyghur language has been banned from schools and a religious crack-down has morphed into a total ban of Islam. In the last 12-18 months, China has put more than a million Uyghurs in re-education camps, where they are held without charge or any terms of release.

Now, it appears the true scale of the oppression is increasingly coming to light, as the Australian Strategic Policy Institute says there are 380 suspected facilities in the Xinjiang region – some 40% more than previous estimates.

“The findings of this research contradict Chinese officials’ claims that all “trainees” from so-called vocational skills training centres had “graduated” by late 2019,” lead researcher Nathan Ruser wrote. “Instead, available evidence suggests that many extrajudicial detainees are now being formally charged and locked up in higher security facilities.”

The researchers used satellite imagery, witness accounts, media reports and official construction tender documents to classify the detention facilities into four tiers depending on the existence of security features such as high perimeter walls, watchtowers and internal fencing.

It found at least 61 detention sites had seen new construction and expansion work in the year to July 2020.

Fourteen more facilities remain under construction, while around 70 had had fencing or perimeter walls removed, indicating their use had changed or they had been closed, ASPI added. It noted that more than 90 percent of the sites were lower-tier security facilities.

The US at the forefront of outcry

The only country as economically and geopolitically capable as China in the current world order is the US. Interestingly, it is the US that has launched an offensive against China’s treatment of the Uighurs earlier this year. The country had imposed sanctions on three senior officials of the Chinese Communist party, including a member of the ruling politburo, for alleged human rights abuses targeting ethnic and religious minorities in the western part of the country.

The US’s fight against China on this topic has continued, as news has come out that the US will block some exports from China’s Xinjiang region, over alleged human rights abuses against the mostly Muslim Uighur minority. It says “forced labour” was used to make the products, including at a “vocational” centre it called a “concentration camp”.

The export ban includes garments, cotton, computer parts and hair products from five entities in Xinjiang as well as Anhui province. It stops short of a wider regional ban. “These extraordinary human rights violations demand an extraordinary response,” Kenneth Cuccinelli, the Department of Homeland Security’s acting secretary told reporters. “This is modern-day slavery,” he said. The move is the latest by the Trump administration to put pressure on China over the situation in Xinjiang.

In July, U.S. Customs and Border Protection officers detained 13 tons of human hair products originating from Xinjiang and suspected of being made with forced labor. The halting of the products followed the agency’s nationwide block of imports from a company suspected of using forced labor in Xinjiang.

The XPCC, a paramilitary organization that answers to the Communist Party, controls 20 percent of economic activity in Xinjiang and operates more than 800,000 subsidiaries, according to a supply chain analyst. The sanctions freeze the XPCC and its subsidiaries’ assets and prevent it from accessing the U.S. financial system or doing business with U.S. companies.

“The United States is committed to using the full breadth of its financial powers to hold human rights abusers accountable in Xinjiang and across the world,” Treasury Secretary Steven T. Mnuchin said in a July 31 statement. However, this alone will most probably not lead to China backing down, as a more united global front is needed, and China has already been engaged in a trade war war with the US for several years.

China has not only continued its operations in Xinjang, but also continues to deny allegations of its oppressive treatment of the Uighur population.

China has defended its controversial policies in the Xinjiang region, just days after the US government announced import restrictions on products coming out of the area. Beijing has come under fire for a network of detention centres which mostly house Muslim minorities. But a new document says millions of workers have benefited from “education and vocational training”. The US has likened the centres to concentration camps.

“Xinjiang has built a large knowledge-based, skilled and innovative workforce that meets the requirements of the new era,” the report reads. It says the training provided includes written and spoken Mandarin, labour skills and “knowledge of urban life”. The report says people from rural areas have started their own businesses or got jobs in factories after receiving state support.

China has long insisted that mass “vocational education and training” is necessary in far-western Xinjiang to counter terrorism and alleviate poverty. But human rights groups have said at least one million people have been incarcerated in camps which they describe as “re-education” centres.

Furthermore, while Chinese officials have officially acknowledged birth rates in Xinjiang dropped by almost a third in 2018, compared to the previous year, they still denied reports of forced sterilization and genocide by authorities in the far western region. The Xinjiang government sent CNN the six-page fax in response to questions for an article published in July that documented a campaign of abuse and control by Beijing targeting women from the Uyghur minority, a Muslim ethnic group numbering more than 10 million people. The fax didn’t arrive until September 1, a month after the story was published.

China continues to be assertive in its policy to suppress its Muslim Uighur population in Xinjang, and although the US is working hard to counter this, it is not enough. The global scene needs to mobilize and act quickly, or else China will continue this at an accelerating rate as is being discovered.