After World War 2, Britain was faced with growing demand for the removal of British troops from Egypt.

But in 1946 there were, in fact, still over 100,000 British troops in the country. Their presence was bitterly resented.

As far as the British were concerned, the military bases in the Canal Zone were of vital importance and the scale of the commitment was enormous.

The network of bases occupied 750 square miles and was, according to one historian, “the world’s most elaborate military complex”

What began as low-level guerrilla attacks by locals on British troops escalated into violence. British responded by shelling Egyptian villages in response to increasing attacks.

On 23 July 1952 a secret society organised within the Egyptian army, the Free Officers, staged a coup that overthrew Farouk.

The coup took place with the full support of the CIA and, according to one account, the Americans promised the conspirators that they would prevent the British from intervening on Farouk’s behalf.

As far as the Americans were concerned, a modernising dictatorship aligned with the US was the way forward and they supported the Egyptians in negotiations over the Canal Zone.

Churchill, the prime minister, in particular, regarded it as outrageous that Britain could no longer dictate terms to an inferior people for whom he had the utmost contempt.

On one occasion he told Anthony Eden that he should tell the Egyptians ““that if we had any more of their cheek we will set the Jews on them and drive them into the gutter from which they should never have emerged”.

Without American support, however, the British no longer had the ability to impose their will on the Egyptians.

On 27 July 1954 the Churchill government finally concluded an agreement to evacuate British troops from Egypt by 18 June 1956.

Even after the 1954 Settlement the British could not accept the notion of Egyptian independence.

The nationalisation of the Suez Canal by Gamal was another blow to British prestige.

While covert efforts were already under way to overthrow both Nasser and the Syrian government (“Operation Straggle”), there was now a pretext for a full-scale military intervention to take back the Canal.

The Americans were not interested in helping to bolster British power in the Middle East.

In an act of desperation by a government that believed the British position in the Middle East was lost unless some dramatic stroke could rescue it.

Eden entered into secret discussions with the French and Israelis that eventually resulted in the Sèvres Protocol of 24 October 1956.

Under the terms of an illegal conspiracy, Israel would attack Egypt, whereupon Britain and France, posing as peacemakers, would demand that both sides withdraw from the Suez Canal area.

The British state no longer had either the financial or the military strength for such demonstrations, but the Britsh refused to face up to this.

The Israelis launched their surprise attack on Egyptian positions in Sinai and the Anglo-French ultimatum was presented to both sides the following day.

The Egyptians rejected the ultimatum and the British bombers began their attacks.

The actual invasion began with paratroop landings followed by a seaborne assault on Port Said but the following day the British and the French agreed to a ceasefire aborting the plan.

The decisive factor in the ceasefire was the hostile stance taken by the United States.

Eisenhower reacted to the invasion with fury. The Americans were not prepared to tolerate independent action on this scale on the part of the British.

Not only did they not want any revival of British power and influence in the Middle East, but they were afraid that Britain’s old-fashioned imperialism would play into the hands of the Russians.

Accordingly, the United States took the lead in condemning the invasion and backed this up with financial and oil sanctions.

This forced the British to accept a ceasefire without any of their political or military objectives having been gained.

British troops finally withdrew on 22 December 1956. This defeat of the British is argued as the death knell to Britain’s status as the leading power. 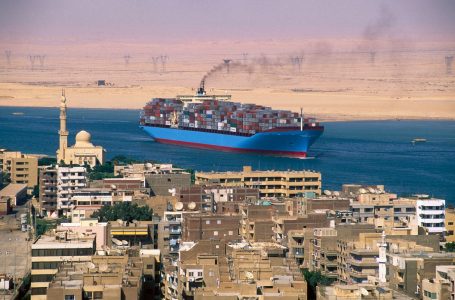