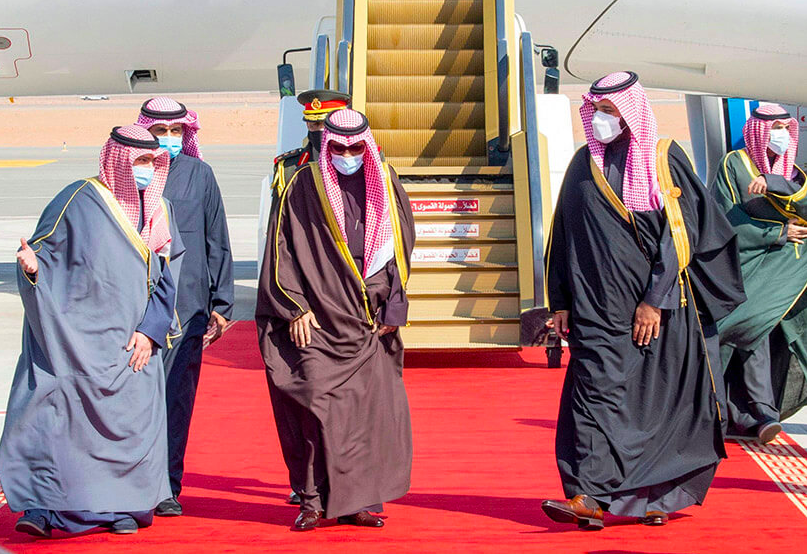 Saudi Arabia reopened its airspace and land and sea borders with Qatar on Monday, in a breakthrough agreement aimed at ending the three-year diplomatic dispute with Doha.

Saudi Arabia and its three Arab allies agreed to restore full ties with Doha at a summit in the Kingdom on Tuesday, the Saudi foreign minister said.

Under the agreement, Saudi Arabia will open its airspace to Qatari planes on the condition Qatar Airways drops a $5 billion lawsuit against the four nations seeking damages for the blockade.

The US has played an important role in bringing Saudi Arabia and Qatar back together. The Trump administration has been pushing for an end to the blockade and paving the way for a united Gulf against Iran.

“There is a strategic alliance between the US and Qatar based on mutual respect and common interests,” Khalid bin Muhammad Al-Attiyah told the Doha-based Al-Jazeera television. This could be an aggressive move by the US to try to force the Saudi-led block to normalize relations with Qatar.

Now, Donald Trump’s son in law and senior advisor Jared Kushner, helped broker the deal over the past few weeks and flew to Saudi Arabia on Monday to witness the signing at the Gulf Cooperation Council meeting, the official said.

Kushner, 39, has developed a close relationship with Saudi Arabia’s de facto ruler Crown Prince Mohammad bin Salman, 35, and visited Riyadh in November in a bid to end the blockade.

The Trump administration has in recent months backed down from its initial support of the blockade, and taken a mediating position, due to the importance of a united Gulf of US allies to counter Iran’s growing influence in the region.

The latest summit has raised hopes of finally having a united Gulf. Will this be the case? Can the Gulf stand united in the face of major geopolitical and economic issues?

Well, this is certainly the aim of the Saudis and the Americans. The Gulf unity and the continuation and success of the Gulf Cooperation Council (GCC) are top concerns for Custodian of the Two Holy Mosques King Salman, the head of Saudi Arabia’s Shoura Council, Abdullah Al-Sheikh, said on Monday.

In a statement carried by the Saudi Press Agency Al-Sheikh also stressed that the invitation of King Salman to the GCC leaders comes amid exceptional circumstances the region is facing, which require cooperation among the member states and strong joint action.

The Shoura Council chief also praised the efforts of Crown Prince Muhammad Bin Salman, under the direction of King Salman, to strengthen the GCC and maintain its unity, security, stability, and cohesion. “The region suffers from turmoil in view of the foreign interference in the affairs of the countries of the region, threatening the close and historic relations among the member countries and their people,” he said.

King Salman put Gulf unity and continuation of Gulf Cooperation Council at the forefront of his priorities, the head of Shoura Council said on Monday. The region is facing unique challenges which require cooperation, Abdullah Al-Sheikh added in a report from state news agency SPA. Saudi Arabia reaffirmed its commitment to the unity of the GCC in December.

Since the GCC’s establishment in 1981, the Kingdom had taken a balanced approach that supported every effort and every action that contributed to achieving common goals and aspirations, a government spokesman said.

“As the elder sister to the GCC countries, the Kingdom has sought to overcome the various obstacles, disagreements, and developments facing the work process, whether in terms of viewpoints or on the ground,” the spokesman said in a statement published by the Saudi Press Agency.

Although this is an ambitious project, and the restoration of ties with Qatar is indeed a historic moment for the Gulf, the difference in geopolitical stances between Qatar and Saudi Arabia along with the UAE remains. Qatar’s ties with Iran will be a major obstacle in any meaningful cooperation with the UAE and Saudi Arabia, who’s aim is to contain the Iranian threat. Qatar’s strong relations with Turkey may be an even larger obstacle especially in ties with the UAE who have grown increasingly hostile to Turkey and its regional policies in recent years. However, normalization will open the door to meaningful negotiations that could help mend those differences. There is nevertheless a hard road ahead.