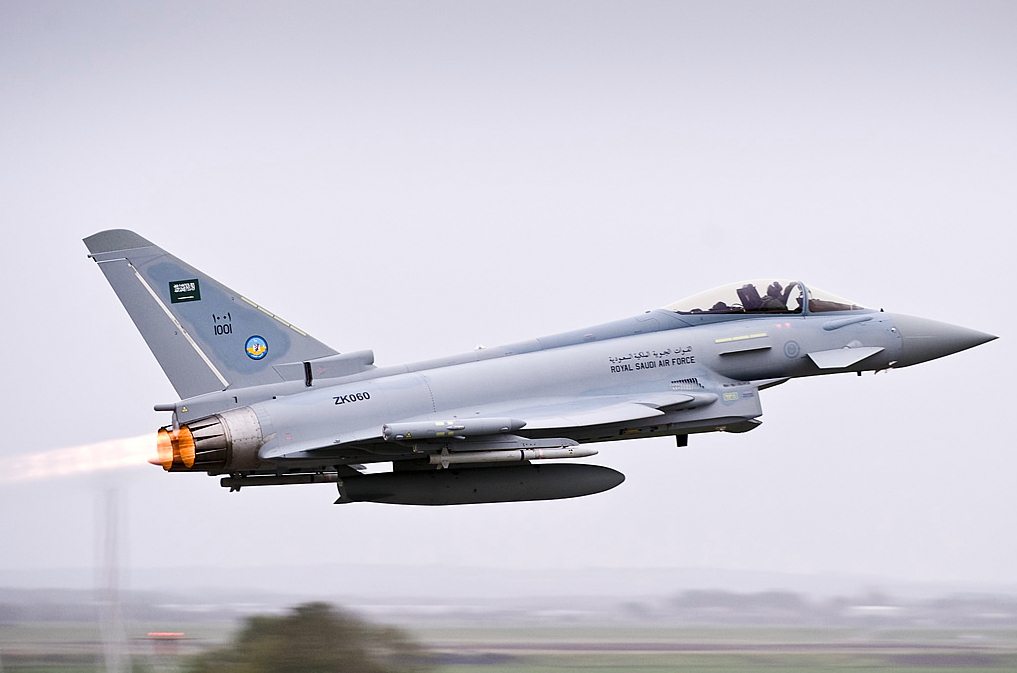 Royal Saudi Air Forces fighter jets arrived in Greece on Saturday ahead of their participation in military exercise Eye of the Falcon 1, which will take place in March.

The F-15C fighter jets touched down with their air, technical and support crews in Crete.
The Saudi and Greek air forces will carry out joint sorties and exercises in the skies over the Mediterranean Sea.

Saudi air force personnel were greeted on arrival by the Kingdom’s ambassador to Greece Dr. Saad bin Abdulrahman Al-Ammar and other officials.

The exercise aims to refine and develop the skills of the air and technical crews and raise the combat readiness of Saudi air forces.
It also aims to facilitate the exchange of military experiences in planning and implementing air operations.

In addition to this, Greece is eyeing the possibility of stationing a Patriot anti-missile battery on Saudi soil to help the Kingdom boost its air defenses against missile attacks on its critical infrastructure, mainly from Iran-backed Houthi militias in Yemen.
Speaking in front of the Foreign Relations and Defense Committee in the Greek Parliament, Foreign Minister Nikos Dendias said the two countries may be close to signing a Status of Forces Agreement that will allow Greek military personnel to be stationed in Saudi Arabia for as long as the Patriot battery remains in the Kingdom.

Discussions between Riyadh and Athens on the delivery of a Patriot battery started during the last days of the previous Greek government.

The plan is for the Patriot to be accompanied by around 40 Greek officers. Riyadh will cover the cost of transport and of upgrading the battery.

The Patriot is considered one of the best anti-missile systems in the world. Its radar can cover an area of up to 170 km, while it can engage targets in a range of up to 150 km.

Saudi Arabia and Greece are therefore keen on developing a military partnership. One that could change the geopolitical scene in the Middle East, and one that could be backed by Saudi Arabia’s neighbor, as will be discussed below.

The UAE has in recent months rapidly accelerated military and geopolitical ties with Greece, not hiding the fact that this targets Turkey’s expanding influence. Now that Saudi Arabia is doing the same, many believe that the UAE is the one pushing Saudi Arabia in this direction.

The meeting proved historic. Greece and the UAE signed a strategic partnership agreement, including a mutual defense clause. Athens hailed it as one of the most important agreements it had signed since World War II.

Last summer, the UAE sent F-16 fighter jets to Crete to participate in military exercises with the Hellenic Air Force.

In a further sign of growing military cooperation, Greece, the UAE, Cyprus, Egypt and France conducted from Nov. 30 to Dec. 6 a joint multinational aeronautical exercise codenamed “Medusa” in Alexandria, Egypt.

The exercise was an unofficial, although direct, message to Turkey against its muscle flexing in the eastern Mediterranean.

A joint military exercise between Greece, Cyprus, Israel, the UAE, Slovakia, Spain, Canada and the US is on the cards for later this year.

Now Saudi Arabia could join the UAE in this increased cooperation with Greece, which could damage any hopes of repairing ties with Turkey.

How does this affect Saudi-Turkish relations?

“I will discuss the matter with Saudi officials,” he continued.

“We think this should not have happened,” the Turkish President added.

In recent months, Turkey and Saudi Arabia have been trying to mend their damaged ties. Turkey sees no reason not to mend ties with Saudi and the United Arab Emirates, the country’s foreign minister Mevlut Cavusoglu said on Friday.
‘There is no reason for Turkey not to mend ties with Saudi Arabia; if they take positive step, we will do so as well, same goes for UAE,” Cavusoglu was cited as saying by state-owned Anadolu news agency.

With the Biden administration’s lukewarm relations with Saudi Arabia, the latter is trying to end its differences with Turkey.  The ties between Saudi Arabia and Turkey worsened in the aftermath of Saudi journalist Jamal Khashoggi’s killing in 2018.  A public campaign was run in Saudi Arabia to boycott the Turkish goods.

According to some news agencies, the Saudi leadership is trying to contact Turkish President Recep Tayyip Erdogan to iron out the differences between two countries.

According to Christian Devon of Arab Gulf States’ Institute, Washington, the new American policy seems to lean towards Iran and to review its policy towards Saudi Arabia.

Saudi Arabia aspires for a role as a partner to solve conflicts in the region. After restoring ties with Qatar, the next goal of Saudi is to lessen tension with Ankara.  In this regard, as a goodwill gesture, Saudi Arabia had released a number of prisoners. These actions amply indicate Riyadh’s policy shift.

Despite this will from both sides, it appears that the UAE, who is more hostile towards Turkey, and leans towards Israel, has used its influence and positive relations with Saudi Arabia to push it towards Greece and Israel, a move that is sure to damage any hopes of reconciliation. However, as Erdogan’s statement has shown, Turkey has not given up just yet.