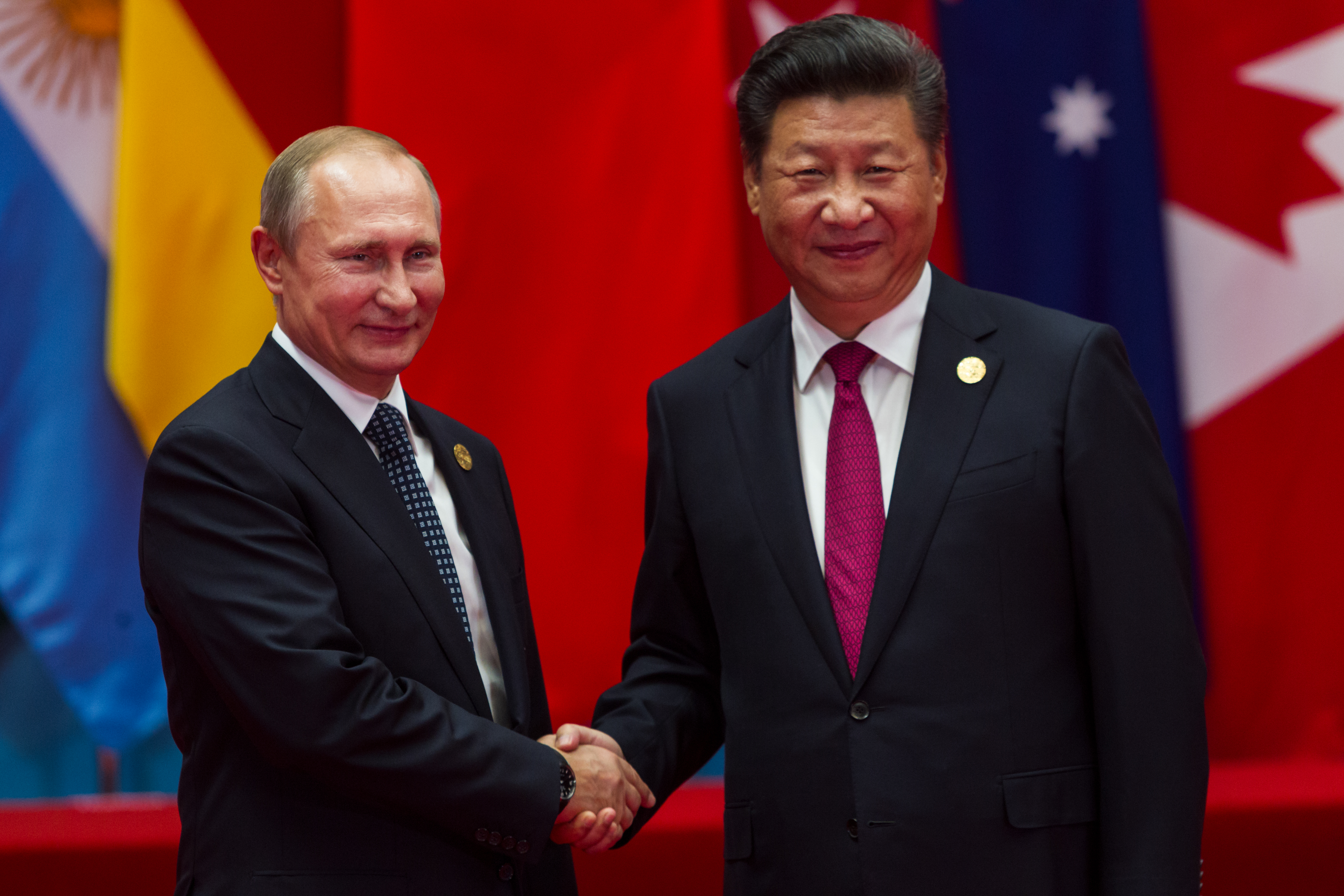 In spite of widespread beliefs about Russia and China being strategic partners, or even allies who oppose the unilateral world order, in reality the two countries are geopolitical rivals. Moscow has all the reasons to worry about growing Chinese presence in Siberia, as well as in the Russian Far East, while Beijing is skeptical about Russian arming Chinese geostrategic opponents such as India and Vietnam.

No Russian Pivot to China

Joint military maneuvers, that the two countries occasionally have, are merely a show for the Western audience. On the ground, the feeling of a common threat from the United States is unlikely to lead to an official military alliance between Russia and China. The officials in Moscow and Beijing even avoid to call their relationship an alliance. Instead, they describe their relations as comprehensive partnership or strategic interaction. Deeper geopolitical realities are showing that China and Russia could be only allies of convenience.

Two years before his death, one of America’s leading twentieth-century strategic thinkers, Zbigniew Brzezinski, said that for the United States the most dangerous scenario would be a grand coalition of China and Russia united not by ideology but by complementary grievances. As Brzezinski noted, if such coalition ever occurs, China would likely be the leader and Russia the follower. At this point, however, it’s unlikely that Russia and China will form such coalition.

In 2015, China’s former deputy foreign minister and former chair of the Foreign Affairs Committee of the National People’s Congress, Fu Ying, said that China has no interest in a formal alliance with Russia. In spite of that, many pro-Kremlin analysts keep assuring that the cooperation between the two countries is stronger than ever, and that it’s a matter of time before Russia and China ruin the current world order dominated by the United States. Such claims are far from reality. Russia began to speak out about setting a coalition with Beijing shortly after it had become aware of the failure of its reset policy towards the United States. Moscow’s long-lasting priority, inherited back from the Yeltsin era, was to encourage cooperation with the West, with particular regard to Europe. Russian foreign and economic policies are controlled exclusively by a narrow circle of the country’s elite who continues to look west. They are predominantly European in their culture, history, religion and dreams. Wealthy Russians buy second homes in London, New York and on the French Riviera. They speak English and travel to Paris, New York or London to shop. Also, many Kremlin officials have children who live in the West. Therefore, Russia is both culturally and economically too dependent on the West, which why a Russian pivot to China doesn’t look realistic.

Russia as a Younger Partner

Officially, Russian-Chinese relationship has rarely been better. However, their cooperation is based mostly on economy. More than three-quarters of Russia’s exports to China are raw materials, specifically crude oil, wood, and coal. But trade is lopsided in China’s favor. In addition, the fall in energy prices has made China considerably less dependent on Russia.

China’s sales to Russia are 45 percent consumer goods and 38 percent electronics and machinery. On the other hand, Chinese entrepreneurs and state-run companies remain quite reticent about investing in Russia, especially in its financial sector, mainly due to the risk of imposing sanctions.

Even though the advances in trade between the two countries are obvious, it is China that profited most from such cooperation. According to the World Bank, China’s gross domestic product in 1992 was slightly smaller than Russia’s. A quarter-century later, in 2017, it was nearly eight times as large. All this marked a shift in the attitude of the Kremlin that a decade ago saw Beijing as its younger partner. Today’s reality is completely different.

Faced with Western sanctions over its role in the Donbass conflicts, as well as Crimean incorporation into Russian Federation, Moscow is now very enthusiastic about its ties with

Beijing. Such enthusiasm gives Russia significantly less freedom of maneuver than before. China is sympathetic and interested in cooperation but has no intention of making Russia the focal point of its foreign policy. Also, Beijing does not want to go as far as forming an alliance with Russia or engaging with the Kremlin at the cost of its relations with other major powers.

Moscow, on the other hand, doesn’t want to be forced take sides if China clashes with strategic Russian economic partners such as Vietnam or India. That might be one of the reason why China failed to support Russia in matters of great geopolitical importance to Moscow. For instance, Beijing refused to recognize the independence of Abkhazia and South Ossetia after the Russian-Georgian war in 2008. Also, it abstained from, instead of voting against, the U.N. resolution condemning Russia’s 2014 seizure of Crimea. Beijing reaffirmed its position on territorial integrity of Georgia and Ukraine and proceeded its cooperation with both.

Moscow and Beijing now form a de facto duopoly in Central Asia, with Russia preeminent on political and security issues and China in charge of economic development. Three of the eight countries with the highest debt risk from Chinese lending are Russia’s close neighbors: Tajikistan, Kyrgyzstan and Mongolia. China can exploit the weakness of small economies that borrow big, as it did when it wrote off a portion of Tajikistan’s debt in exchange for disputed territory in 2011.

China is also seeking to expand its influence into Central Asia, particularly by building an economic corridor through its New Silk Road initiative – a move which could threaten Russia’s long historic influence over these former Soviet republics and client states. During the Soviet era, Mongolia was considered the USSR’s unofficial 16th republic, with most people in the country being able to speak and understand Russian. By the 1990s, Mongolian trade with Russia declined by around eighty percent, as China’s diplomatic relationship and economic influence over Mongolia increased.

Russia and China are divided by several factors, including their rivalry in the Arctic and the North Pacific, the two regions that Russia seeks to guard against competitors. China, on the other hand, has a growing polar appetite, and Moscow is also afraid of China’s feasible intention to populate the Russian Far East. But at this point Central Asia remains the most direct area of Sino-Russian rivalry.

Is China Aiming for Siberia?

Chinese authorities, on the other hand, are carefully planning a big jump to the other bank of the Amur River, as exemplified by their recent decision to allow citizens living in the regions bordering Russia to have up to three children, against a two-child policy applied throughout the country. This will contribute to intensifying China’s expansion onto depopulated areas of the Russian Far East, including Siberia.

Some Russian political groups and media fear that, in the foreseeable future, Beijing might take control of these territories. Recently, Chinese internet company Sohu, which was the official internet content service sponsor of the Beijing 2008 Olympic Games, published an article in which the author explained that due to the loss of Sakhalin, which is the largest island of the Russian Federation, China is now paying a heavy price. Many Chinese claim that, historically, Sakhalin was controlled by China for some three hundred years. The author of this article regrets that the island is now part of Russia, and estimates that by exploiting the island’s rich energy resources, Russia can earn around $500 billion, which is actually the amount that China’s losing by not controlling Sakhalin.

Such statements do not represent the official Chinese policy regarding Russian Federation. Still, many Russian analysts fear that, in the foreseeable future, Moscow will have to face with the growing Chinese threat.

What the future brings?

Current US-Chinese trade war has worked out well for Russia, bringing Beijing closer to Moscow. However, the longer Western sanctions on Russia remain in place, the more Moscow’s dependency on Beijing will grow.

While the two countries have many good reasons to cooperate, from trade to security, including the rejection of US-led democracy promotion, their relationship remains more difficult than it might look on the surface. In the long term, the growing Chinese presence in Siberia and in the Russian Far East might become a ticking time bomb for the declining Russian Federation.