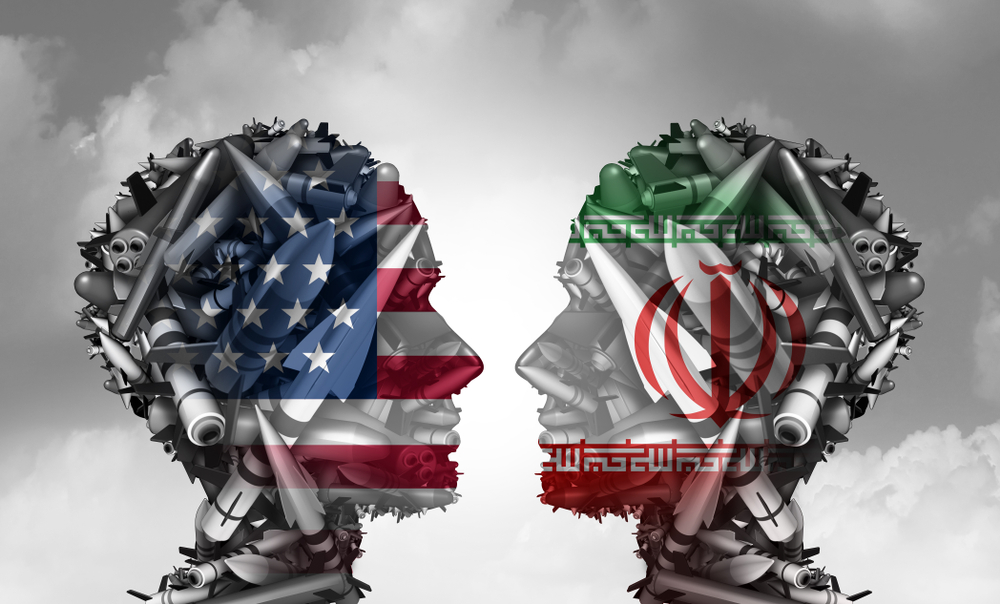 Iran US missile conflict and United States middle east crisis concept as an American and Iranian security problem due to economic sanctions and nuclear deal dispute with 3D illustration elements.

Iran US missile conflict and United States middle east crisis concept as an American and Iranian security problem due to economic sanctions and nuclear deal dispute with 3D illustration elements.

An Iran hawk who advocated killing general Qassim Soleimani, US Secretary of State Mike Pompeo has ordered his diplomats to limit contacts with militant Iranian exile and opposition groups that support either regime change or greater rights for ethnic groups like Kurds and Arabs.

Coming on the back of the Soleimani killing, Mr. Pompeo’s directive appears to put an end to the Trump administration’s hinting that it covertly supports insurgent efforts to at the very least destabilize the Iranian government if not topple it.

A litmus test of the directive by Mr. Pompeo, known to have a close relationship with Donald J. Trump, is likely to be whether the president’s personal lawyer, Rudolph Giuliani, distances himself from the controversial National Council of Resistance of Iran (NCRI), an offshoot of the Mujahedeen-e-Khalq, a group that was taken off the US Treasury’s list of designated terrorists several years ago.

Mr. Giuliani is a frequent, well-paid speaker at gatherings of the group that has built a significant network among Western political elites. The council and the Mujahedeen openly call for regime change in Iran.

The Mujahedeen were moved with US assistance from their exile base in Iraq to a reportedly Saudi-funded secretive facility in Albania.

A New Jersey-based lobbying firm hired by the NCRI, Rosemont Associates, reported last year in its filing as a foreign agent frequent email and telephone contact on behalf of its client with the US embassy in the Albanian capital of Tirana as well as Brian Hook, the US Special Representative for Iran, and Gabriel Noronha, an aide to Mr. Hook.

In his directive, Mr. Pompeo said that “direct US government engagement with these groups could prove counterproductive to our policy goal of seeking a comprehensive deal with the Iranian regime that addresses its destabilizing behaviour.”

The secretary went on to say that Iranian opposition groups “try to engage US officials regularly to gain at least the appearance of tacit support and enhance their visibility and clout.”

Mr. Pompeo’s cable, while keeping a potential negotiated deal with Iran on the table, does not stop other US government agencies from covertly supporting the various groups, that also include Arab Struggle Movement for the Liberation of al-Ahwaz (AMLA), the Komala Party of Iranian Kurdistan, and the Kurdish Democratic Party of Iran (KDPI).

Iran, which has long believed that the United States, alongside Saudi Arabia and Israel, supported the Mujahedeen as well as ethnic militants that intermittently launch attacks inside Iran, is likely to take a wait-and see-attitude towards Mr. Pompeo’s directive that could be seen as a signal that the Trump administration is not seeking regime change.

The timing of the directive is significant. Iran responded to the killing of Mr. Soleimani with carefully calibrated missile attacks on US facilities in Iraq in a bid to create an environment in which backchanneling potentially could steer the United States and Iran back to the negotiating table.

While it was uncertain that one round of escalated tensions would do the trick, potential efforts were not helped by the death of Oman’s Sultan Qaboos bin Said al Said, a key interlocutor who has repeatedly helped resolve US-Iranian problems and initiated contacts that ultimately led to the 2015 international agreement that curbed Iran’s nuclear program.

In his directive, Mr. Pompeo, referring to Komala, acknowledged that “Iran’s regime appears to assess that the United States and/or Israel support this group of militant Kurds.”

Iranian perceptions were reinforced not only by calls for regime change by senior figures like Mr. Giuliani and Saudi prince Turki al-Faisal, a former head of the kingdom’s intelligence service and ex-ambassador to Britain and the United States, but also the appointment in 2018 of Steven Fagin as counsel general in Erbil in Iraqi Kurdistan.

Shortly before moving to Erbil, Mr. Fagin met In Washington as head of the State Department’s Office of Iranian Affairs, with Mustafa Hijri, leader of the KDPI as it  stepped up its attacks in Iranian Kurdistan.

Iranian perceptions were further informed by the appointment of John Bolton, Mr. Trump’s since departed national security advisor and like Mr. Giuliani a frequent speaker at NCRI events, who publicly advocates support of ethnic insurgencies in Iran in a bid to change the regime.

The appointment was followed by publication by a Riyadh-based think tank believed to be close to crown prince Mohammed bin Salman of a study for Saudi support for a low-level Baloch insurgency in Iran. Prince Mohammed vowed around the same time that “we will work so that the battle is for them in Iran, not in Saudi Arabia.”

Pakistani militants have claimed that Saudi Arabia had stepped up funding of militant madrassas or religious seminaries in the Pakistani province of Balochistan that allegedly serve as havens for anti-Iranian fighters.

The New York Times reported this week that aides to Prince Mohammed had in the past discussed with private businessmen the assassination of Mr. Soleimani, an architect of Iran’s regional network of proxies, and other Iranians as well as ways of sabotaging the country’s economy.

Mr. Pompeo’s directive is unlikely to persuade Iran that Washington has had a change of heart. Indeed, it hasn’t. Mr. Trump maintains his campaign of maximum pressure and this week imposed additional sanctions on Iran.

Nonetheless, potentially taking regime change off the table facilitates backchanneling that aims at getting the two nations to talk again.