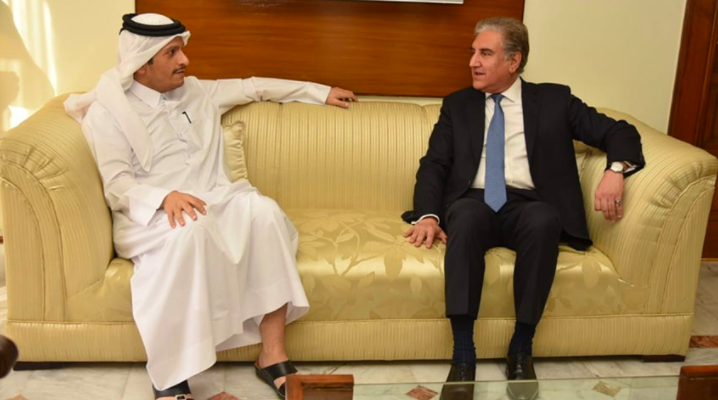 Armed forces of Pakistan and Qatar have underscored the importance of further enhancing defence relations and cooperation, stated a press release issued by Inter-Services Public Relation on Friday.

The resolve was expressed by the two countries during Chief of the Army Staff (COAS) General Qamar Javed Bajwa’s two-day official visit to Qatar.

During the visit, the army chief witnessed the passing out parade at Ahmed Bin Muhammad Military College. General Bajwa appreciated high standards of the institution and its efforts towards grooming of young cadets to take on challenges of the future battlefield.

Sheikh Tamim Bin Hamad Al-Thani reiterated that Pakistan and Qatar share brotherly relations of strategic value. While expressing their satisfaction over the level of defence relations between the two Armed Forces, both sides underscored the importance of further enhancing the cooperation.

Pakistan could benefit from Gulf normalization

Pakistan will benefit geopolitically and economically from Gulf unity, as it has often been caught in the middle of the dispute, as it has maintained strong ties with Qatar and its allies, while also trying to maintain economic ties with Saudi Arabia and the UAE. It has hence often tried to take the position of mediator, but nevertheless, its relations with Saudi Arabia have suffered in recent years as a result. Now that the blockade has ended, Pakistan may finally have a chance to develop its relations with an increasingly united Gulf.

Indeed, in a sign of optimism following the agreement, a high-level Saudi delegation led by the kingdom’s foreign minister is set to pay an official visit to Islamabad in January. Pakistan is currently focusing on energy projects under its new renewable energy policy to harness the local energy resources as well as the revival of exploration and production activities in the oil and gas sector to attract foreign investment and boost economic growth.

Pakistan’s energy minister discussed the prospect of new energy projects and joint ventures in the oil and gas sector with the envoys of the United Arab Emirates and Saudi Arabia in Islamabad.

The recent normalization has given Pakistan the chance to rapidly enhance ties with Qatar without compromising other relations.

Despite this, there are some notable obstacles in the path of returning to optimal relations between Pakistan and Saudi Arabia and the UAE. Pakistan’s refusal to normalize ties with Israel is especially important in this respect as the UAE and Bahrain have already normalized ties with the latter, while Saudi Arabia looks on track to do so as well. Meanwhile, US geopolitical rival China’s increasing influence in Pakistan could be problematic to a Gulf united under the supervision of thr US, and according to many analysts, the US’s intent behind ending the blockade is to try to maintain a unitary policy in the Gulf of pro-Israel and anti-Iranian bloc, adding Qatar to the mix. Pakistan’s hostility to Israel could therefore be a larger obstacle than initiallt expected.

Pakistan using this opportunity to strengthen ties with the UAE

Pakistan has also appeared to take advantage of the latest developments, by accelerating ties with the UAE.

Pakistan Foreign Minister Shah Mahmood Qureshi on Wednesday termed the country’s relationship with the UAE as “special” and said the country’s leadership steadfastly stood by Pakistan in its times of need.

In a meeting with the UAE’s Ambassador Hamad Obaid Ibrahim Salem Al Zaabi in Islamabad, Qureshi said Pakistan always accorded paramount importance to its long-standing fraternal ties with the UAE.

Al Zaabi hailed the strong UAE-Pakistan ties and pledged to work towards further strengthening and diversifying them in all sectors for the benefit of the two countries and their peoples.

He acknowledged the positive contribution of Pakistani diaspora towards the progress and development of the UAE.

Al Zaabi reaffirmed the UAE’s desire to bolster bilateral ties with Pakistan on the basis of mutual respect, understanding, and common interests.

Recalling his successful visit to the UAE in December 2020, Foreign Minister Qureshi said that he looked forward to improved high-level interactions with the UAE as soon as the global health situation improved. He emphasised the importance of frequent high-level visits from both sides to provide impetus towards deepening and diversifying bilateral relations.