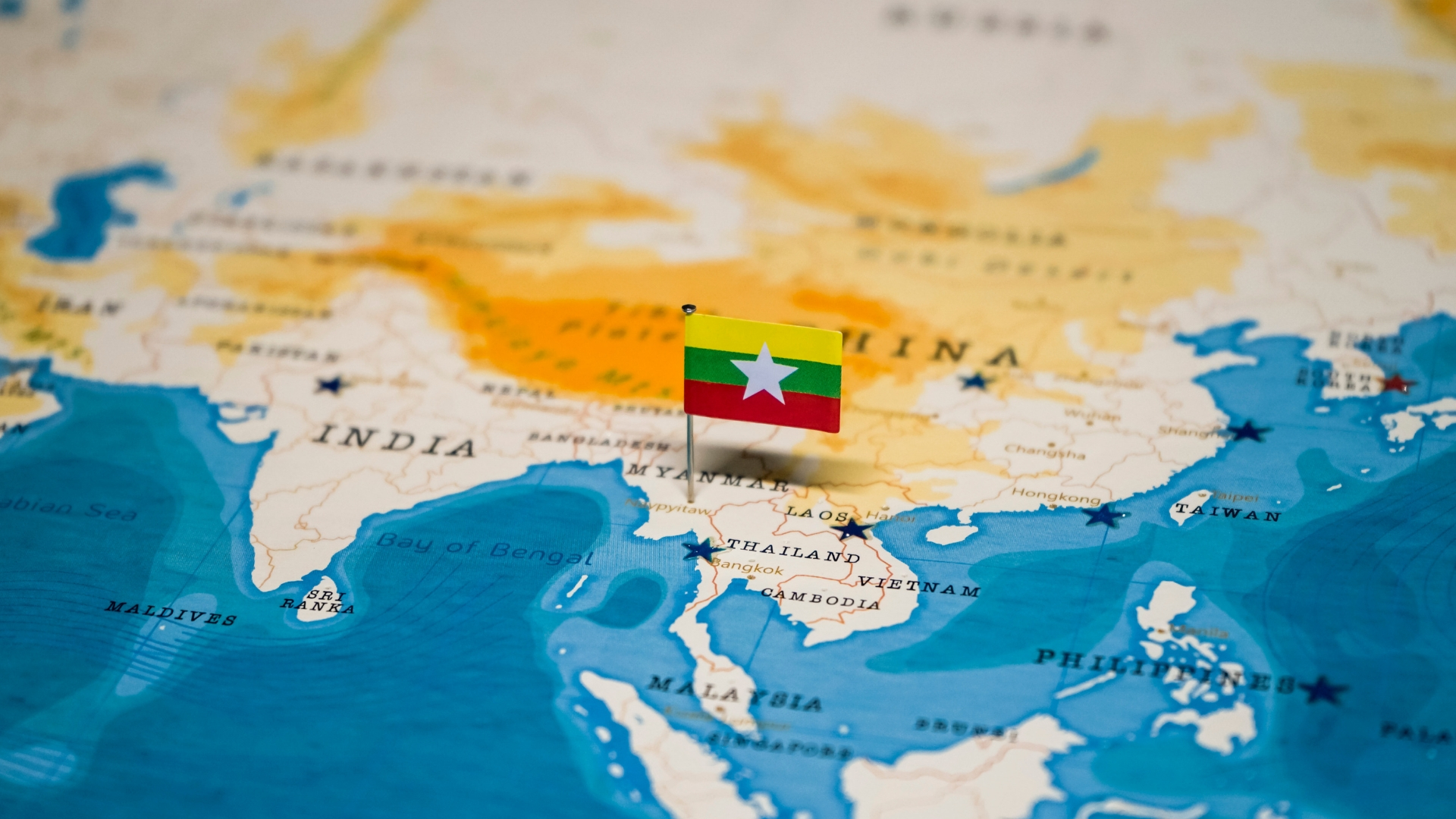 The Flag of Myanmar on naypyidaw in the world map

The Flag of Myanmar on naypyidaw in the world map

1. Tug of war for Myanmar

China and the US are playing a tug of war for increased influence in Myanmar, due to the abundance of natural resources. With the recent international opposition to Myanmar’s expulsion of the Rohingya population, the two superpowers have taken different sides of the spectrum to try to gain influence in the area. In spite of the Rohingya issue that has been ongoing for a number of years,  China has emerged as the largest investor in Myanmar’s commercial centre Yangon, accounting for 65 of 113 approved foreign invested projects in fiscal 2018-19. According to a July 26 report in The Irrawaddy, the surge in new Chinese investment has been concentrated in Yangon but is also growing fast in other parts of the country. At the same time, spurned by the West over its abysmal human rights record, Myanmar is increasingly turning to China to fill its foreign investment shortfall, while China are also aiding the country militarily. On the other hand, the US is taking a different approach, as they recently banned visits by Myanmar’s army chief and three other top officers due to their role in the “ethnic cleansing” of the Rohingya minority, urging accountability for their brutal campaign. The US is trying to use its influence to change the military command in its favour, which would make the return of the Rohingyas more likely, while more importantly making the US have a bigger role in the nation.

2. China’s influence through One Belt One road

China’s political influence in China, is clearly displayed through the role of the  influence in Myanmar on the Arakan Army’s (AA) and its endorsement of China’s One Belt One Road (OBOR) or Belt and Road Initiative (BRI). Generally, China employs a government-to-government and party-to-party two-pronged relationship with Myanmar as it usually does with the other countries. But lately, with the ambitious BRI mega project, it seems to have added another channel which is military to military. Myanmar relies heavily on China for military equipment and food supplies, as well as two-way trade which involves exporting natural resources and mineral extraction, among others.  the Myanmar government recently agreed to begin work on key projects under the China-Myanmar Economic Corridor (CMEC) agreement which is part of the BRI. An estimated $2 billion will be spent in the initial stages of the project. This is a major sign of China’s increased influence in the nation, and the BRI is set to be the perfect tool for it.

3. India’s help in Bay of Bengal

India is using Myanmar to develop an opposition to China’s military influence in the region. Myanmar Commander-in-Chief Senior General Min Aung Hlaing had visited Delhi last month, during which India and Myanmar signed a defence cooperation agreement. India’s willingness to transfer a frontline submarine when it is facing a shortage of such platforms reveals a desire on New Delhi’s part to consolidate the growing convergence in security interests with Myanmar. From Myanmar’s perspective it is clear that they are trying to play a balancing game, serving both India and China’s opposing interests, in an attempt to build support to protect from the international opposition to the treatment of the Rohingyas.

4. UN calls for boycott on Myanmar

The above moves from Myanmar had come as preparation for the reaction of the UN that has been now revealed. The UN has officially warned foreign companies to sever ties with the nation, in findings that will underscore the legal and reputational risks faced by investors in the country, they also urged member states to impose sanctions against specifically military-run companies, as well as prevention of arms sales to them. The official report signifies an intensifying international pressure being put upon Myanmar regarding the issue. “We have started the process of identifying what the military is doing in Myanmar, so that our recommendation of economic disengagement can become more practical and can be taken up by businesses, the governments of other countries, and the UN and its programmes,” Chris Sidoti, a member of the UN fact-finding mission on Myanmar told the Financial Times by telephone. It remains to be seen how Myanmar will react, but their strengthening relations with China and India could facilitate an adamant response.

Another nation that is openly opposing Myanmar’s expulsion of the Rohingya community is Malaysia. The Myanmar government on Friday denounced Malaysian Prime Minister Mahathir Mohamad over comments he made suggesting the creation of a separate state for the country’s persecuted Rohingya Muslims, calling it a violation of ASEAN’s non-interference principle. In an interview with Turkey’s Anadolu Agency on July 26, Mahathir said Myanmar’s Rohingya had faced a genocide during a brutal military-led crackdown in Rakhine state in 2017, and that those who fled their homeland should be granted the right to citizenship or given a self-governing territory. Myanmar responded with a request not to interfere with their affairs, “Myanmar cannot accept this kind of [interference] in other nation’s internal affairs,” the spokesman said. Malaysia’s opposition is interesting, considering their economic ties with China, but is part of a pattern of Malaysia increasingly standing up to China. Myanmar should be concerned, if its only support is coming from China and India, and it is a possibility, that if sanctions are imposed, they may soften their stance.