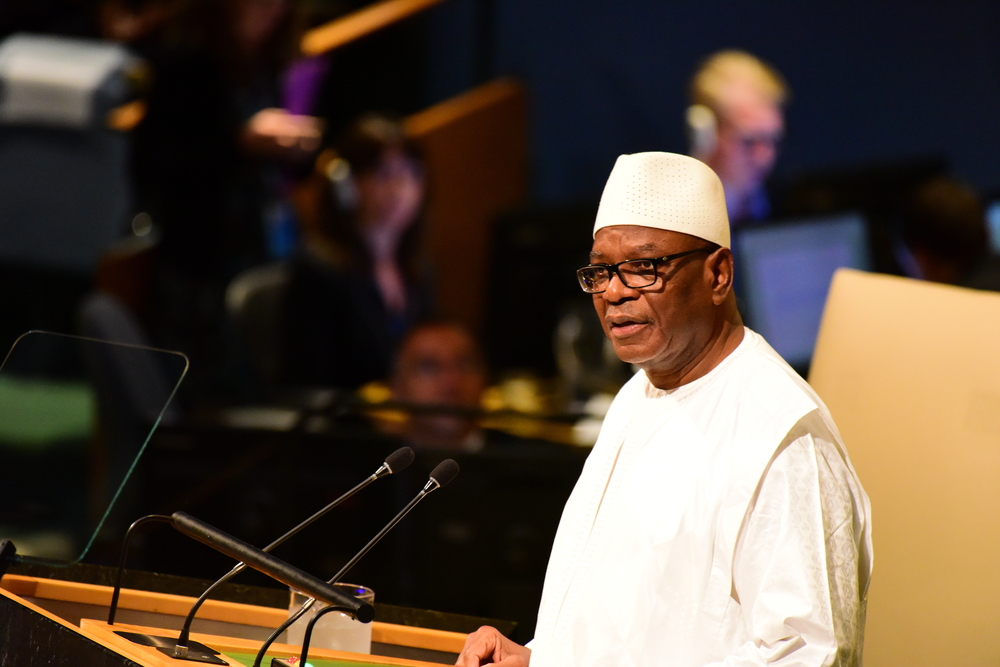 Malian President Ibrahim Boubacar Keita announced around midnight on Tuesday that he is resigning from his post saying that he does not wish blood to be shed following a military mutiny that plunged the country into a political crisis. “Today, certain parts of the military have decided that intervention was necessary. Do I really have a choice? Because I do not wish blood to be shed,” Keita said in a brief statement broadcast on national television.  Keita said that he has decided “to give up my duty from now on.”

The president, Ibrahim Boubacar Keïta, and the prime minister, Boubou Cissé, were seized on Tuesday evening after a day of confusion and chaos in a country already facing a jihadist insurgency and mass protests. Speaking on national broadcaster ORTM just before midnight, a distressed Keita, wearing a mask amid the coronavirus pandemic, said his resignation three years before his final term was effective immediately.

His departure was met with jubilation by anti-government demonstrators in Bamako, the capital of the unstable west African country. “All the Malian people are tired we have had enough,” one demonstrator said.

It is unclear if the military is now officially in charge of the country. The development came hours after soldiers took up arms and staged a mutiny at a key base in Kati, a town close to Bamako. The soldiers were expected to deliver a statement later, while countries in West Africa, along with former colonial power France, the European Union and the African Union, denounced the actions of the soldiers and warned against any unconstitutional change of power. The UN security council has scheduled a closed meeting for Wednesday to discuss the unfolding situation in Mali, where the UN has a 15,600-strong peacekeeping mission.

The events came amid a weeks-long political crisis that has seen opposition protesters taking to the streets to demand the departure of Keita, accusing him of allowing the country’s economy to collapse and mishandling a worsening security situation.  More on the political background will be discussed in the next section.

Mali has been suffering a political crisis and unrest for a long time now. President Ibrahim Boubcar’s popularity has plummeted this year amid allegations of corruption and a relentless Islamic insurgency that began the year before he took office and has worsened under his watch. In June, demonstrators began taking to the streets by the thousands calling for his ouster, naming themselves the June 5 Movement.

The so-called opposition June 5 Movement also accuses Keita of allowing Mali’s economy to collapse and of mishandling a spiralling security situation in the northern and central regions that has entangled regional and international governments, as well as a United Nations mission that is considered the most lethal of any currently active.

The violence, in which ideologically-motivated armed groups have stoked ethnic tensions while jockeying for power, has spilled into the neighbouring countries of Niger and Burkina Faso, destabilising the wider Sahel region and creating a massive humanitarian crisis.

Nearly two weeks ago, things took a dramatic turn for the worse when security forces attempted to put down the protests over several days. At least a dozen people were killed, and grief deepened the resolve of Keita’s opponents to seek his removal. West Africa’s shuttle diplomacy has included several regional political heavyweights who helped intervene in 2012 when a military coup gave way to a jihadist takeover across Mali’s north. ECOWAS pressured the coup leader to hand over power to a transitional civilian government. The year after the coup, Keita won the first elections organized after the country’s return to democracy.

Political tension has been simmering since Keita won re-election in August 2018 in a poll that opposition parties said was marred by irregularities. The government pushed ahead with a legislative election in March despite the coronavirus outbreak, and drew further ire after the Constitutional Court overturned 31 of the results. That decision handed Keita’s party 10 more parliamentary seats, making it the largest bloc.  Also in March, unidentified gunmen abducted Mali’s main opposition leader, Soumaila Cisse, as he campaigned in the country’s volatile centre. He has not been heard from since.

Meanwhile, as mentioned earlier, there have been continuous allegations of corruption and power consolidation among the government elite, fuelled by recently published images of the president’s son partying on a yacht abroad. This comes as citizens continue to struggle under Mali’s crumbling economy, which depends largely on gold and cotton and has been badly affected by the devolving security situation and the coronavirus pandemic. Mali has struggled to regain stability since 2012, when ethnic Tuareg rebels and loosely aligned armed groups seized the northern two-thirds of the country, leading former colonial power France to intervene to temporarily beat them back.

Despite the peace accord signed in June 2015 between the government, the Platform of northern militias, and the Coordination of Movements of Azawad (CMA), violent conflict between CMA and Platform forces continued throughout the northern region. Terrorist groups not party to the peace process–including Ansar al-Dine, al-Qaida in the Islamic Maghreb (AQIM), al-Murabitoun, and the Macina Liberation Front (FLM)–carried out attacks against the military, armed groups, and civilian targets throughout the northern and central regions.

Mali’s prime minister and his government resigned 18 April 2019, four weeks after a massacre by then ethnic vigilante group shocked the nation. President Ibrahim Boubacar Keita accepted the resignation without giving a reason for the departure of Prime Minister Soumeylou Boubeye Maiga. “A prime minister will be named very soon and a new government will be put in place after consultations with all political forces” from both the ruling and opposition sides, the statement from Keita’s office said. President Ibrahim Boubacar Keita appointed a new prime minister, days after the government resigned amid a spike in violence in the restive West African country. Former Finance Minister Boubou Cisse, 41, was tasked with forming a “broad government” to stem the bloodshed in the country. Cisse does not belong to any political party and served as the country’s finance minister for three years under the previous government.

International powers, particularly France, which has had a military presence in Mali since 2013, are also worried the latest crisis could undermine multibillion-dollar efforts to contain the armed groups. The continued displacement caused by the violence, European leaders fear, may also fuel another wave of migration to their shores.

This is the backdrop to the latest military coup and resignation of President Keita, the latter of which has been expected for a long time. It remains to be seen however, whether the military leadership will solve the country’s deep problems.

Despite the populace’s aim being achieved in the resignation of President Keita, there are now bigger question marks than ever regarding the future of Mali’s politics and security.

The streets of Bamako, the capital, exploded with both jubilation and gunfire after President Ibrahim Boubacar Keïta and his prime minister, Boubou Cissé, were detained along with other government officials. Around midnight, the president announced on state TV that he was resigning. The effects of the turmoil could spill beyond the borders of Mali, a country whose strategic location has geopolitical implications for West Africa, the Sahel, the broader Arab world, the European Union and the United States.

Mali’s new military rulers have promised “a civilian political transition” that will lead to a general election after a “reasonable time”. In a short televised statement on Wednesday morning, the soldiers who are now in charge of the country after a military coup on Tuesday said they were “not interested in power but in the health of the nation” but had intervened because of growing “chaos, insecurity and anarchy”. In the name of the National Committee for the WellBeing of the People, Col Maj Ismaël Wagué promised polls to “give Mali strong institutions capable of better managing our everyday lives and restoring confidence between the governed and the governors”.

The mutinous soldiers who staged Tuesday’s military coup identified themselves as the National Committee for the Salvation of the People led by Colonel Major Ismael Wagué. “With you, standing as one, we can restore this country to its former greatness,” Wagué said, announcing that borders were closed and that a curfew was going into effect from 9 p.m. to 5 a.m.

It remains to be seen whether they fulfill their promise, but the possibility remains that foreign intervention could change the political scene once again as it did in Libya.