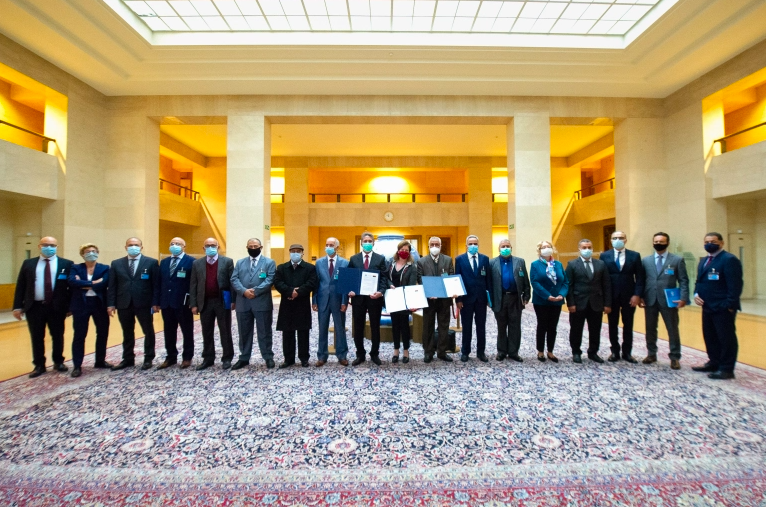 A Libyan political dialogue arranged by the United Nations has made progress towards agreeing on a new transitional government to oversee the run-up to elections in December.

Participants at UN-brokered talks in Geneva agreed on a mechanism for choosing the new government, whose formation has been the subject of wrangling among the main factions in the war-torn country.

UN acting envoy for Libya Stephanie Williams told a news conference on Saturday the advisory committee’s members “have met their responsibility with a constructive spirit, cooperative efforts, and a great deal of patriotism”.

The committee is part of a 75-member forum that represents all three main regions of Libya.

The 18-member committee has proposed that each region’s electoral body name a representative to a three-member presidential council, Williams said. A prime minister would be chosen by the 75-member forum., with the successful nominee receiving 70 percent of the votes.

He noted that the voting ends on Tuesday 10:00 local time (08:00 GMT), and the result will be announced in the same day.

The dialogue forum member also added that the executive authority will be temporary and unified, and will be replaced by an elected government on Dec. 24 this year.

Williams said, according to the mechanism, the forum would first receive candidate lists from Libya’s three regions, each consisting of four names nominated for the presidential council and prime minister position.

She said a list should obtain 17 endorsements: eight from the western region, six from the eastern region, and three from southern Libya.

The lists would be narrowed down, the winning candidates being those who receive 60 percent of the votes of the 75-member forum in the first round. A second round of voting will be held if no clear winners emerge from the first round.

Williams said the forum would vote on the proposed mechanism on Monday and the results are expected the following day.

The transitional government would be “a temporary unified executive staffed by Libyan patriots who want to share responsibility rather than to divide the cake”, the UN acting envoy said.

The United States welcomed the breakthrough and urged all Libyan parties “to work with urgency and in good faith” to establish an interim government, according to a statement by the US embassy in Libya.

The United Nations Support Mission in Libya (UNSMIL) on Tuesday commended the municipal elections in the western towns of Ar-Rajban and Al-Zawiya Al-Gharbia.

UNSMIL “congratulates the citizens of Ar-Rajban and Al-Zawiya Al-Gharbia on the conduct of peaceful and democratic municipal council elections on 21 December 2020,” the mission said in a statement.

It also praised the efforts of the Central Committee for Municipal Council Elections (CCMCE) to conduct the elections during the COVID-19 pandemic.

“I commend the civic responsibility of the citizens who exercised their right to vote and demonstrated their resolve in democracy and elected institutions. I encourage all voters to actively participate in upcoming municipal elections, particularly women, youth and vulnerable groups,” said Stephanie Williams, acting special representative of the secretary-general of the United Nations in Libya.

However, the Central Committee for Municipal Council Elections (CCMCE) announced the rerun of local elections amid unconfirmed claims of serious fraud and interference by armed groups.

In its announcement on Thursday, all the CCMCE said was that there would be a re-election in two polling stations in Swani ‘‘because the electoral process does not match the correct procedures. The repetition will take place on Saturday, January 23, 2021’’

However, according to a former CCMCE official, militiamen forced their way into polling stations in Swani and stuffed extra ballots into the boxes.

In Hay Andalus, militiamen ordered elections staff to leave three polling stations during the day, and to leave the ballot boxes behind. Later the staff were allowed to return.

There have been no complaints, however, from UNSMIL, the CCMCE or from any Libyan media outlet. The only comment from UNSMIL was to welcome the elections when the vote initially got underway on 7 January.

This could have serious implications for other local elections. The former CCMCE official expressed concern that because there has been no reaction, militias elsewhere may copy what happened.

Nevertheless, the UN has voiced its optimism about the peace process.

A United Nations (UN) spokesperson said here on Friday that significant progress had been made in the ongoing talks on the selection mechanism of a unified executive authority in Libya. Jean Al Alam, spokesperson for the UN Support Mission in Libya (UNSMIL), told a press briefing that the UN hopes that the delegates will shortly be able to narrow down their differences and reach a consensus on the contentious issues being discussed.

The 18 members of the newly established Libyan Political Dialogue Forum’s Advisory Committee are meeting at the UN Geneva Office between Jan. 13 and Jan. 16. According to the spokesperson, the committee’s main mission here is to discuss outstanding issues related to the selection of a unified executive and to put forward concrete and practical recommendations.

At Friday’s press briefing, the spokesperson also told reporters that very encouraging progress had been made in Libya recently, including exchanges of detainees as part of wider confidence-building measures, the resumption of flights to all parts of Libya, and the full resumption of oil production and export.

Libya’s eastern-based army and its UN-backed government fought for more than a year in and around the capital Tripoli before the conflicts ended last June. On Oct. 23, 2020, Libyan delegations signed a UN-sponsored permanent ceasefire agreement in Geneva.

On Jan. 3, the UN interim envoy to Libya Stephanie Williams announced the formation of an 18-member Consultative Council of the Libyan Dialogue Forum with the aim to draft a form mechanism for the Libyan temporary executive.

Despite the progress on the political and military levels between the rival Libyan parties, the Libyan government documented several violations by Libyan warlord Khalifa Haftar’s militia to the ceasefire reached on Oct. 23 under the UN mediation.