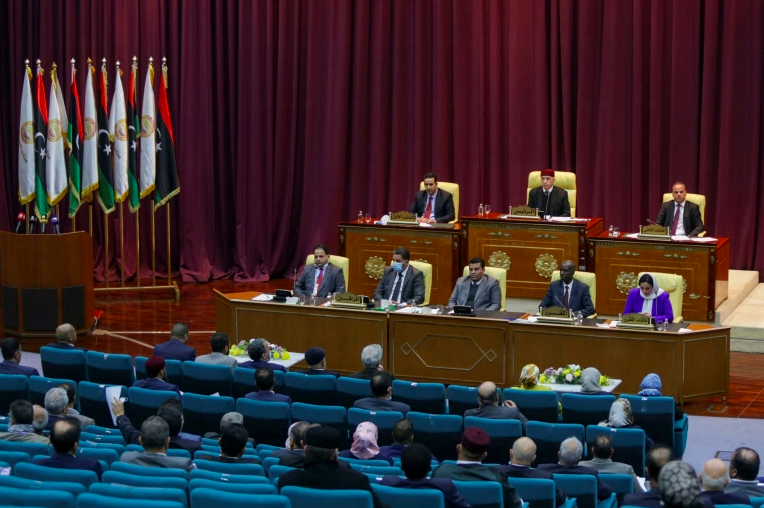 Libya’s reunited parliament voted on Wednesday to approve an interim government after a decade of chaos and violence, to oversee elections in December as part of a UN-backed peace plan.

After two days of intense debate, the parliament on Wednesday approved the cabinet of interim Prime Minister Abdelhamid Dbeibah, with 121 of the 132 lawmakers present voting in support, his spokesman said.

The parliament’s approval of Prime Minister Abdulhamid Dbeibeh’s Cabinet by 132 votes to 2, at a session in the frontline city of Sirte, is the biggest opportunity in years for a resolution to Libya’s conflict.

“Through this vote, it became clear that the Libyans are one unit,” Dbeibeh told parliament.

Tarek Megerisi of the European Council on Foreign Relations said: “If we come out of this with one government and one set of institutions then we’re already in a far superior place than we’ve been for the past five years.”

It was parliament’s first full session in years after it split between eastern and western factions in 2014, three years after an uprising toppled Muammar Qaddafi and plunged Libya into chaos.
A cease-fire has held since the autumn, but the main road across the front lines from Sir

te to Misrata remains closed and parliament members from the west had to fly in from Tripoli.

Dbeibah, who was selected last month at UN-sponsored talks in Geneva, last week presented his proposed cabinet to Saleh.

The powerful businessman from the western city of Misrata was appointed last month to lead the executive branch of an interim government that also includes a three-member Presidential Council chaired by Mohammad Younes Menfi, a Libyan diplomat from the country’s east.

The transitional government is to lead the country through elections, scheduled for December 24, according to a UN-brokered plan.

In another majorly positive sign, Libya’s Presidential Council head Fayez al-Sarraj said Wednesday that he is ready to step down and pass his tasks and responsibilities to the new government to consolidate the principle of peaceful transition of power.

“I congratulate the government of national unity for the vote of confidence and I wish the new Cabinet success in accomplishing its tasks,” al-Sarraj said.

“What happened today is an important step to end the conflict and division,” he noted, calling on all parties to intensify “cooperation, unity, and tolerance for the sake of the renaissance of Libya.”

Meanwhile, the government loyal to the Libyan warlord Khalifa Haftar expressed on Facebook its “full readiness to hand over tasks, ministries, directorates, and institutions to the national unity government.”

There have been a variety of foreign approvals coming in after the parliamentary vote. To start with, UN Secretary-General Antonio Guterres on Wednesday welcomed the endorsement as “an important step towards restoring unity, stability, security and prosperity” in the country.

He commended members of the House and the Libyan Political Dialogue Forum for their work in advancing the political process in Libya, and also praised the country’s 5+5 Joint Military Commission and local authorities in Sirte for their efforts in securing the parliament’s approval.

Guterres encouraged the new unity government to cooperate with the House of Representatives “to address the urgent needs of the Libyan people without delay, advance preparations for national elections on Dec. 24, 2021, and continue to work toward the full implementation of the ceasefire agreement of Oct. 23, 2020.”

In addition to this, Turkey, who had previously backed the GNA, on Wednesday welcomed Libya’s parliament voiced confidence in the new government formed by Prime Minister Abdul Hamid Dbeibeh.

“We welcome the Government of National Unity, which Prime Minister Abdul Hamid Dbeibeh proposed to the Libyan House of Representatives on March 10, 2021,” the Foreign Ministry said in a written statement.

“We congratulate Dbeibeh and the new government, and wish them success,” it added.

Turkey hopes that the new government will take rapid and concrete steps to provide public services, run the election process, unite institutions, and achieve comprehensive national consensus for the welfare of friendly and brotherly people of Libya, the statement noted.

The UAE on Wednesday also congratulated Libya, its government and people, for the decision taken by the parliament to grant confidence to the Government of National Unity, headed by Prime Minister Abdul Hamid Dbeibeh.

The UAE also conveyed its congratulations and appreciation to the UN Secretary-General Special Envoy for Libya and the members of the United Nations Support Mission for Libya (UNSMIL), who contributed to this historic achievement, and affirmed its full support for the remaining tracks under the supervision of the United Nations Mission to complete the roadmap. The UAE had previously backed Eastern-based Khalifa Haftar.

The reaffirmation of international powers with a big role in the conflict, after the parliamentary approval is also a very positive sign that forecasts the possible success of this interim government. However, there are some considerable worries that could severely damage such hopes.

Why do experts remain worried?

Critics of the UN peace plan say it has merely rearranged the tangle of alliances and enmities among power brokers who have dominated Libya for years, without disrupting their ability to loot its wealth or wreck political agreements they dislike.

There is particular scrutiny on Dbeibah himself.

The manner of Dbeibeh’s own appointment and the expansive size of his cabinet have drawn criticism in Libya, with accusations of corruption and influence-peddling that opponents could leverage to deny his legitimacy.

The legitimacy of Libya’s new interim prime minister, Abdul Hamid Dbeibah, has been thrown into doubt by a UN inquiry finding that he allegedly gained power after his supporters offered bribes as high as $200,000 to attract votes.

His supporters allegedly offered the money in a hotel in Tunis where a UN-selected 75-strong political dialogue forum met to elect an interim prime minister to lead a new unified executive towards national elections in the country in December.

The inquiry reports that a row broke out in the lobby of the hotel after delegates discovered that the bribe for their vote was lower than that being offered in secret to others. One delegate heard that as much as $500,000 was on offer.

The interim prime minister’s office has described the claims as fake news designed to disrupt the political process.

The UN report is due to be published on 15 March after an investigation into the allegations of bribery was demanded by the then acting UN special envoy for Libya, Stephanie Williams.

This would certainly be a large blow to the interim government, as the process would have to be restarted.

Meanwhile, Dbeibah on Tuesday denounced a “fierce campaign” aimed at “destroying” the country, presumably referring to the suspicions of corruption weighing on the process that led to his designation.

Mr. Dbeibah was speaking before the deputies, meeting in Sirte (east), calling on them at the same time to give confidence in his government to unify Libya, bruised by years of conflict and power struggles.

It is a “plot” and a “campaign” led by “those who want to destroy our country, who want to occupy it (…) we have no choice but to come to an agreement,” he said.

In addition to this, Dbeibah was already in trouble for making a string of sexist remarks at his first press conference and backtracking on a commitment to give 30% of ministerial posts to women.

Nevertheless, Libya is on the cusp of a first unified government in years and with all sides formally committed to elections. In a visible sign of returning normality, the first civilian airline flight in six years traveled on Tuesday between Benghazi and Misrata.