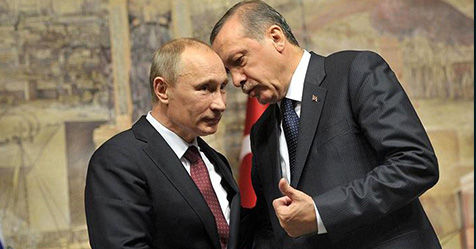 Ties between Russia and Turkey are back on track, Russian President Vladimir Putin has said as he met with Turkish counterpart Recep Tayyip Erdogan in the southern city of Sochi for talks set to focus on the Syrian conflict.

“I want to note at the beginning of our meeting that our relations can be considered practically completely restored,” Putin was quoted as saying by the Russian state news agency TASS on November 13 2017.

Relations between Russia and Turkey soured badly after Turkish jets shot down a Russian warplane near the Syrian border in November 2015, but Putin and Erdogan have taken steps to mend ties since then.

Along with Iran, they have sponsored a series of negotiations on the Syria conflict in Kazakhstan’s capital, Astana.

Addressing reporters in Istanbul on November 13 before departing for Sochi, Erdogan described Putin as “my dear friend.”

The Kremlin has said that Putin and Erdogan plan to discuss regional and international issues including the “joint fight against terrorism” and the efforts to end the more than six-year war in Syria, Turkey’s southern neighbor.

They are also expected to discuss prospects for increasing bilateral trade and cooperation in the energy sector, it said.

Erdogan said he would discuss with Putin more technical details on plans to buy S-400 surface-to-air missile systems from Russia.

Putin and Erdogan last met in Ankara on September 28. After the talks, the two presidents said they agreed to closely cooperate on ending Syria’s civil war.

Russia has given crucial military and diplomatic backing to Syrian President Bashar al-Assad’s government throughout the war, which began with a government crackdown on protesters and has killed hundreds of thousands of people.

With reporting by dpa, TASS, Interfax, and Reuters