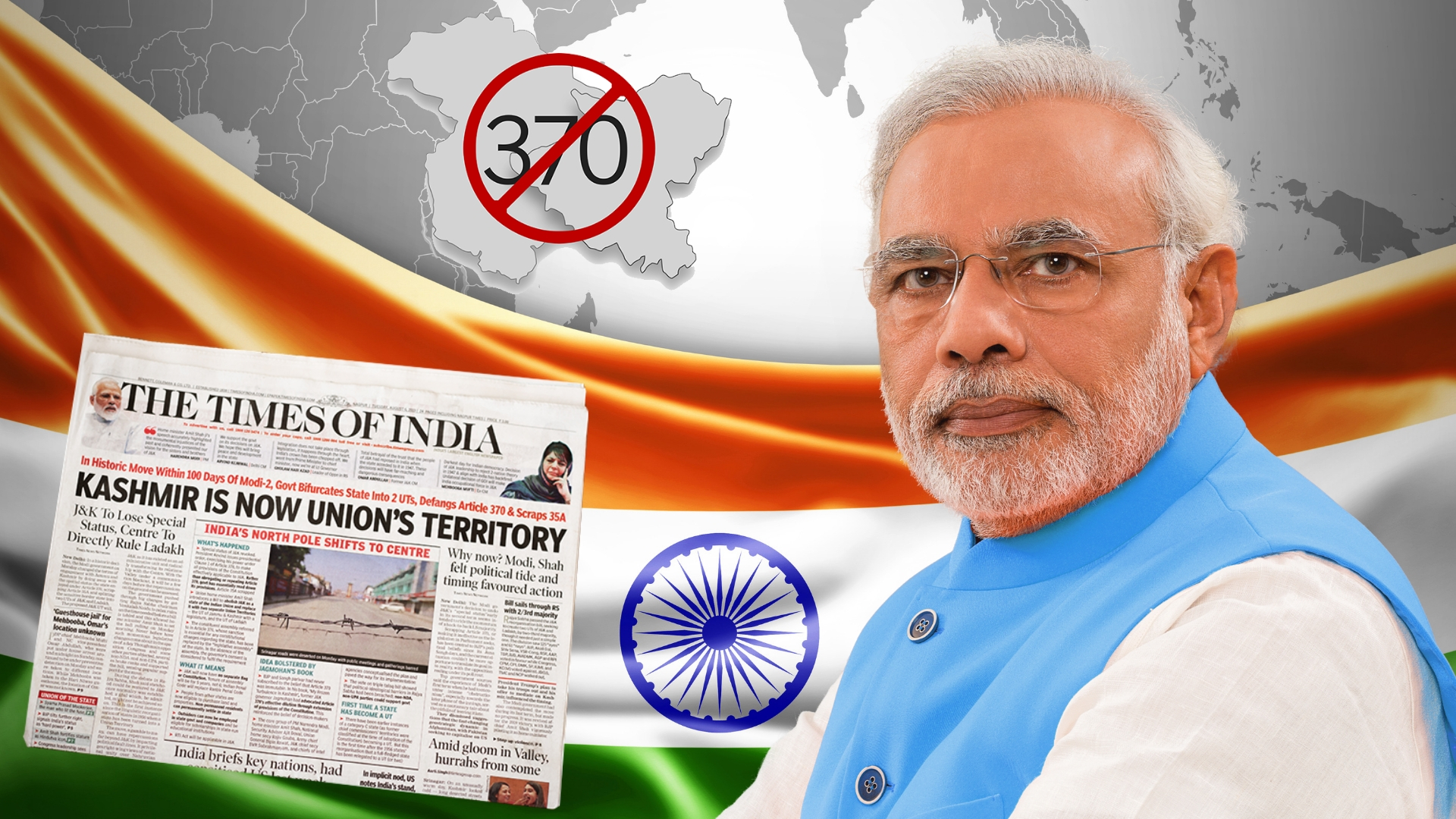 India’s BJP government led by Prime Minister Narendra Modi has recently announced its decision to scrap the Article 370 of the Constitution, which grants a special status for the disputed state of Jammu & Kashmir. This extremely controversial move marks a major shift away from a decades-long policy and breaks a fragile equilibrium, with profound consequences on both the domestic and the international level.

Kashmir has been the object of a bitter territorial dispute since the creation of India and Pakistan in 1947. Originally a princely state in the British Raj, after the independence its Hindu ruler decided to join India even though the population was – and still is – mainly Muslim. War immediately erupted between the two new-born states, and India emerged globally victorious. Yet, the conflict was not resolutive for Kashmir, as it was split between the two countries: an Indian-controlled part enclosed in the broader federal state of Jammu and Kashmir, and a Pakistani portion known as Azad Jammu and Kashmir (where “Azad” stands for “free”). In addition, there is also a Chinese-occupied area named Aksai Chin. The situation is complex: New Delhi claims its sovereignty over both the Pakistani and Chinese zones, Islamabad revendicates the Indian portion and China is firm in considering Aksai Chin as its own territory. Three other wars were fought in the area: the 1962 Sino-Indian war, which ended with Beijing’s victory; the inconclusive India-Pakistan war of 1965; and then a smaller-scale conflict known as “Kargil War” which took place in 1999. Many other minor clashes occurred, the most recent of which took place last February following a terrorist attack in Indian-occupied Kashmir and the subsequent airstrikes conducted by New Delhi and Islamabad on each other’s territory. A separatist insurgency sponsored by Pakistan has been crippling the Indian side since 1989. Terrorist attacks have been performed by Islamist groups, and the conflict has caused several thousands of victims. The situation remains tense, and it should not be forgotten that both India and Pakistan – as well as China – possess nuclear weapons.

The Indo-Pakistani dispute over Kashmir is therefore a highly symbolic matter, since both sides regard the region as an integral part of their territory that is partially and illegitimately occupied by the other. However, the region also holds a notable geopolitical importance. For Pakistan, it represents a buffer zone to increase its strategic depth against India, as the current de facto border – the Line of Control – runs close to the capital Islamabad. From India’s perspective, Kashmir is a useful bulge to threaten Pakistan and its capital. Moreover, the region is essential for the economy and the water security of the two states, and especially for Pakistan’s, since the Indus river and many of its tributaries flow through its territory. In addition, controlling Kashmir would allow India to reach Central Asia with more ease; whereas in Pakistan’s view it is vital to secure communications with China, with whom it has been fostering ever-close ties that include a massive infrastructure project known as China-Pakistan Economic Corridor. Lastly, Aksai Chin should not be forgotten: the area is the juncture between the two autonomous regions of Tibet and Xinjiang, that have both experienced centrifuge pushes against China’s rule.

Article 370 of India’s Constitution has been the cornerstone of the political equilibrium inside Jammu & Kashmir since the partition. According to its provision, the region – which is the only Muslim-majority state in India – enjoyed significant degrees of autonomy: it had its own constitution, symbols, governing authorities and the right to make laws in all spheres of policy; with the notable exception of foreign affairs, defence and communications. It also ensured particular privileges for the locals and forbade the sale of land to outsiders – a key measure to avoid immigration and economic appropriation that may marginalize the Kashmiris in their own territory. It is widely believed that Article 370 has played a key role in preserving a shaky balance in the region and in preventing separatism to become a mainstream ideal among its population.
However, the Article is now revoked. Careful observers understood that something was about to happen since early August. The central government dispatched tens of thousands additional soldiers in the region, closed several facilities, suspended communications, asked tourists to leave and placed several local leaders under house arrest. Yet, most believed that Modi’s administration would only drop Article 35A, which grants special rights to Kashmir’s people and is itself related to Article 370. Instead, with a move whose legal legitimacy is strongly disputed, the executive scrapped the whole Article 370, with the notable exception of the part affirming that Kashmir belongs to India. The Modi administration also intends to split the current state in two federally-administered territories: a smaller Jammu & Kashmir, respectively of Hindu and Muslim majority; and a new Buddhist-majority Ladakh. With the article gone, the decade-long political equilibrium in Kashmir will probably shatter, especially since the Kashmiris fear that immigration and land appropriation will follow, ultimately making them a powerless minority in their own land.
In the past few days, the whole state has been isolated from the rest of the world by security forces, road blocks and communication interruptions, but the few available information seems to indicate that most Kashmiris are sensibly angry and worried over the issue. Clashes between mobs and the police have been reported. The strengthened security apparatus has managed to keep the situation under control until now, but journalists on place mention that the situation is palpably tense and ready to violently explode at any time; thus raising concerns for the moment when the emergency measures will be lifted. In fact, many fear that the measure will push even moderate Kashmiris to support separatism and spark a new, more intense phase of the insurgency.

Yet, the reaction has been different in the rest of India. Some political parties – notably the main opposition force, the National Congress – have condemned the scrapping of Article 370; but few seem willing to challenge Modi either legally or politically out of fear of being labelled as “anti-India”. On the contrary, even some liberal parties like Bahujan Samaj and Aam Aadmi have expressed their support for the executive. May ordinary citizens have welcomed the decision, to the point of cheering in the streets. It must also be noted that there is a category of Kashmiris that has celebrated: the members of the Hindu upper caste of the Kashmiri Pandits. They have been the object of violent attacks since the insurgency begun, and thousands of them were forced to flee their homes. In short, the issue is very sensitive and also very divisive in India; and there could be far-reaching repercussions.

Modi’s decision to scrap Article 370 has surely been a bold move, but also a very risky one. Surely, he will gain even more support at home, since the BJP has been a longstanding critic of Article 370 and its revocation was one of the key promises in the Party’ programme during the last elections. The government has also justified the measure stating that it eliminates the decade-old hinderances to Kashmir’s economic development. However, there is considerable uncertainty in this regard. While allowing non-Kashmiris to purchase lands in the state could indeed bring economic growth by attracting new investments and fostering initiative, there is the risk that the well-being will not be equally distributed and that little benefit will come for the locals. In addition, this will inevitably create tensions between Kashmir-born people and immigrants that could result into violent acts. Arguably, another objective of Modi’s initiative is to strengthen the control of central state on Kashmir to counter separatism more effectively but also to “normalize” the state in political-juridical terms in an effort to gradually and smoothly affirming India’s sovereignty by changing the traditional mind-frame. This approach might even be successful in the long term, if accompanied by proper inclusive policies; but such a radical change cannot happen overnight and therefore the current situation remains highly problematic. Instead, in the short term it raises the risk of alienating the Kashmiri population and strengthen anti-Indian forces; something that would be contrary to New Delhi’s interests. The measure may also backfire on Modi, as a more intense insurgency may damage his government’s credibility if it proved incapable of addressing it.

At the international level, Pakistan has already condemned India’s decision as undemocratic and has taken diplomatic and economic retaliatory measures. Yet, New Delhi’s turn is not much different from Islamabad long-term policy: Article 7 of the interim Constitution of Pakistani-administered Kashmir of 1974 explicitly forbids activities that are contrary to “the state’s accession to Pakistan”. Even though President Imran Khan has ruled out the use of military force, history shows that Kashmir is a flashpoint that can bring the two states to war; and the February incident is not a positive sign. The issue also touches China, which is left on an awkward position. It has established a close strategic partnership with Pakistan and has opposed India’s decision, reaffirming its sovereignty over Aksai Chin. However, New Delhi’s recent turn on Kashmir resembles very much Beijing’s longstanding policy on Tibet and Xinjiang.

In conclusion, Modi’s move has mainly a domestic political rationale, but the issue may have a broader impact: first, it is likely to trigger a new phase of intense insurgency in Kashmir that could ultimately damage Modi’s popularity; second, it exacerbates tensions with Pakistan and raises the risk of a new clash, without forgetting China. By the moment everything is relatively calm, but it could well just be the calm before the storm.