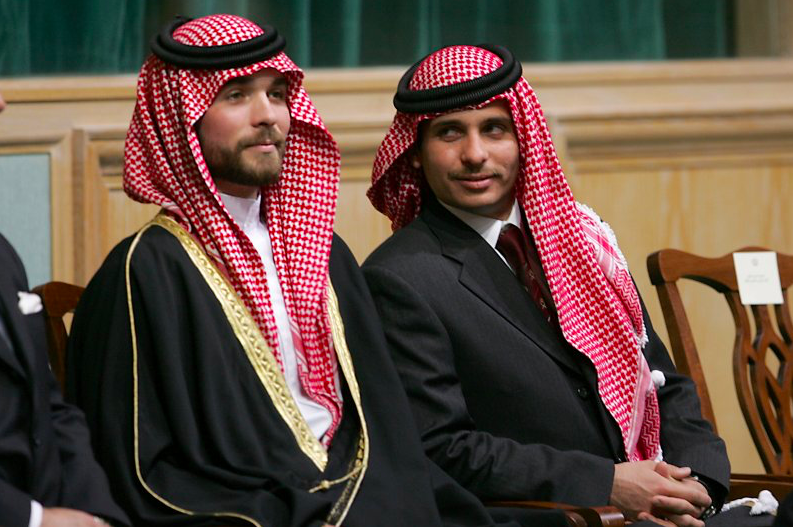 Reports of attempted coup in Jordan

Jordanian authorities said Sunday they foiled a “malicious plot” by a former crown prince to destabilize the kingdom with foreign support, contradicting the senior royal’s claims that he was being punished for speaking out against corruption and incompetence.

Jordan said it had foiled a plot against the kingdom involving a half-brother of the king, arresting at least 16 suspects it accused of “sedition” and alleging foreign complicity.

Hamzah bin Hussein – a former crown prince stripped of that title by Abdullah in 2004 – and the others had worked with foreign parties to “undermine the security” of Jordan, Deputy Prime Minister Ayman Safadi said.

Domestically, Prince Hamzah’s unprecedented criticism of the ruling class  without naming the king — could lend support to growing complaints about poor governance and human rights abuses in Jordan.

Hamzah, 41, had Saturday released a video message via the BBC in which he accused Jordan’s rulers of nepotism and corruption and charged that he had been placed under house arrest.

He lashed out at Jordan’s “ruling system”, saying several of his friends had been arrested, his security detail removed and his internet and phone lines cut.

He denied being part of “any conspiracy or nefarious organisation”, but said the country of 10 million people had “become stymied in corruption, in nepotism and in misrule” and that no one was allowed to criticise the authorities.

The prince is accused of seeking to mobilise “clan leaders” against the government.

But the plot had been “nipped in the bud”, Petra quoted the deputy PM as saying.

Tensions within the royal household had been visible for some time, Jordanian journalist Rana Sweis told the BBC.

“The former crown prince is also seen as popular. He has a very candid resemblance to his father, King Hussein, and he is also very popular with the local tribes,” she said.

Another member of the royal family waded into the row on Twitter on Sunday night, hitting out at Queen Noor and suggesting it was a dispute over succession rights.

But some commentators said the prince’s criticism of corruption in the kingdom struck a chord with many in the country.

“What Prince Hamzah said is repeatedly heard in the homes of every Jordanian,” said Ahmad Hasan al Zoubi, a prominent columnist.

Jordan has few natural resources and its economy has been hit hard by the Covid-19 pandemic. It has also absorbed waves of refugees from the civil war in neighbouring Syria.

Hamzah’s mother, American-born Queen Noor, defended her son and the others, tweeting that she was “praying that truth and justice will prevail for all the innocent victims of this wicked slander”.

Hamzah is the eldest son of Queen Noor and the late king Hussein.

In a statement, the Turkish Foreign Ministry expressed its strong support for King Abdullah II and the Jordanian government as well as for the security and prosperity of the Jordanian people.

The Sultanate of Oman confirmed that it stands with Jordan and King Abdullah and supports the measures taken to ensure Jordan’s security.

The United Arab Emirates (UAE) voiced its support for King Abdullah’s “measures to maintain security and stability in the region.”

Lebanon’s President Michel Aoun announced that his country stands with Jordan’s King and people in the face of what destabilizes Jordan’s security.

Tunisia’s Foreign Ministry in a statement voiced absolute support for the Jordanian leadership’s decisions and measures to safeguard the country’s security.

“The leadership in Sudan followed the recent developments in the Hashemite Kingdom of Jordan with great concern and confirms that Sudan fully stands with and supports His Majesty Abdullah II and the Jordanian people,” the Sudanese Foreign Ministry said in a statement.

In Libya, the Presidential Council expressed solidarity with Jordan and confirmed “the strong and fixed bonds between the two countries.”

Mauritania’s Foreign Ministry also voiced support to Jordan and confirmed that “Jordan’s stability is one of the main safeguards to the region’s stability.”

The prime minister of Iraq’s Kurdish Regional Government (KRG), Masrour Barzani, sent a letter of support and solidarity to King Abdullah II over his recent measures to protect his country’s security and stability.

The Palestinian resistance group Hamas voiced solidarity with Jordan “in light of the recent measures King Abdullah II has taken to safeguard his country’s security.”

Late Saturday and earlier Sunday following the security developments in Jordan, countries including Saudi Arabia, Egypt, Kuwait, Bahrain, Qatar, Yemen, Iraq, Palestine and the US as well as the Gulf Cooperation Council and Organisation of Islamic Cooperation expressed solidarity with Jordan and support for measures taken to ensure its security.

An Israeli businessman with ties to the U.S. government was in touch with former Jordanian Crown Prince Hamzah bin Hussein when he was put on house arrest on Saturday, and proposed to send a private jet to take his wife and kids to Europe.

The Jordanian government claims the Israeli has connections to the Mossad spy agency, while the businessman stresses he’s only a friend of the prince.

The Jordanian government is pushing the narrative that Prince Hamzah and his associates conspired against King Abdullah with people outside of Jordan.

Broaching connections to Israel and the Mossad are effective lines for the Jordanian government’s campaign against Prince Hamzah. Public opinion of Israel is generally negative among Jordanians.

Shaposhnik, 41, was a political operative in the centrist Kadima party in Israel 15 years ago. He served as an adviser to then Prime Minister Ehud Olmert.

“I am an Israeli living in Europe. I never served in any role in the Israeli intelligence services,” Shaposhnik told me. “I don’t have any knowledge of the events that took place in Jordan or of the people involved. I am a close personal friend of Prince Hamzah.”

Supporting this narrative, earlier last month, Jordan’s crown prince, Hussein bin Abdullah, canceled a visit to the al-Aqsa Mosque compound in Jerusalem’s Old City at the last minute after Israeli border officials denied entry to his security detail. There were reportedly disagreements over the size of the crown prince’s entourage. It was supposed to be the 26-year-old Hussein bin Abdullah’s first such trip to Jerusalem’s holy sites, on an Islamic holiday known as al-Isra wal-Mi’raj, which marks the Prophet Mohammed’s night journey from Mecca to Jerusalem and subsequent ascent to heaven.

A day after the cancellation of the crown prince’s visit, Jordan retaliated by denying Netanyahu access to Jordanian airspace for a heavily publicized flight he planned to take to the UAE via Jordan to celebrate Israeli-Emirati ties. With Israelis going to the polls in yet another election March 23, the trip was also clearly timed to benefit Netanyahu’s reelection bid.

There are already simmering tensions between Jordan and Israel, and therefore the link between Israel and an attempted coup could have some backers in Jordan. However, there is no concrete evidence of these claims so far.