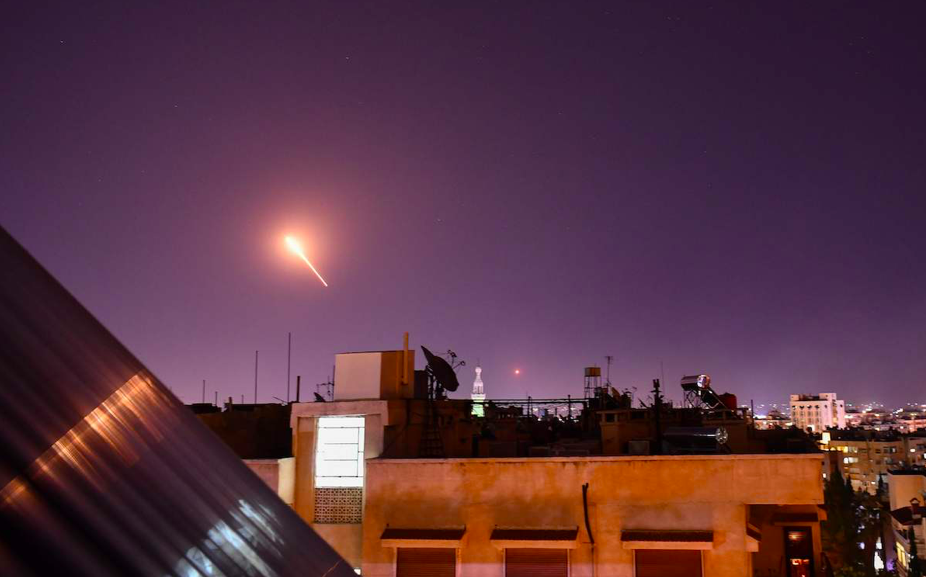 Syria’s military says Israeli warplanes have bombed locations south of the capital Damascus in the second such attack in a week. A Syrian state media report, quoting an unnamed military official, said the fighter jets attacked shortly before midnight on Tuesday.

“At exactly 11:50pm the Zionist enemy launched an air raid from the direction of the occupied Golan Heights towards southern Damascus,” resulting in “material losses”, the source was quoted as saying.

At least eight fighters operating in pro-Iran militias were killed, the UK-based Syrian Observatory for Human Rights said, adding the attacks targeted an arms depot and a position held by Iranian forces and their Lebanese ally Hezbollah. The nationalities of the dead were not immediately known.

Military defectors said the air raids targeted a military base in Jabal Mane Heights near the town of Kiswa, where Iranian Revolutionary Guards have long been entrenched in a rugged area almost 15km (9.3 miles) south of the centre of Damascus. The area has anti-aircraft missiles that are stationed to defend the Golan Heights along the border with Israel, the military sources said.

Syrian news outlets reported that one of the strikes hit targets in the village of Jabal al-Mane, south of Damascus, an area that has in the past been reportedly used by Iran as a base of operations for its proxies in Syria. On July 20, Israel allegedly bombed a weapons depot in that area that was being used by Iranian proxies.

The Tuesday night strikes also reportedly targeted a site near the village of Ruwayhinah, just east of the border with Israel near Quneitra. Israel has accused the Hezbollah terror group of establishing a base of operations in that area.

Iran on Sunday vowed to defeat any Israeli attempt to harm its role in Syria, saying the era of “hit and run” attacks by Israel there was over, days after Israel carried out airstrikes on the Syrian army and Iranian paramilitary targets in the country, Reuters reports.

Israel, which views Tehran as its biggest security threat, has repeatedly attacked Iranian targets and those of allied militia in Syria, where Tehran has backed President Bashar al-Assad and his forces against rebels and militants since 2012.

On Wednesday, an Israeli military spokesman said eight targets were attacked, including an Iranian headquarters at Damascus international airport and a “secret military site” that served as a “hosting facility for senior Iranian delegations when they come to Syria to operate”.

Foreign Ministry spokesman Saeed Khateebzadeh told a virtual weekly news conference: “The Zionist regime (Israel) is well aware that the era of hit and run is over and therefore they are very cautious.”

“Iran’s presence in Syria is advisory and naturally if anyone disrupts this advisory presence, our response will be a crushing one,” Khatibzadeh said.

Iranian Foreign Ministry spokesman Saeed Khatibzadeh told a press conference that “the Zionist regime is well aware that the era of hit and run is over and therefore they are very cautious.”

Is Israel preparing for an American operation against Iran?

The Israeli government has told the Israeli Defense Forces to be prepared for the  possibility the U.S. attacks Iran in President Trump’s final days in office, Axios reports, a move that Trump aides have cautioned the president will likely lead to a rapid escalation of conflict in the Middle East.

The IDF’s preparedness measures relate to possible Iranian retaliation against Israel directly or through Iranian proxies in Syria, Gaza and Lebanon, the Israeli officials said.

Last week, the New York Times reported that Trump raised the possibility of attacking Iran’s uranium enrichment facility in Natanz in a meeting with senior members of his national security team.

Trump raised the idea after being briefed on an International Atomic Energy Agency report about Iran’s growing stockpiles of enriched uranium, but top officials including Vice President Mike Pence and Secretary of State Mike Pompeo warned about the risks of regional escalation, per the Times. Trump seemed convinced that it would be too risky to strike Iran directly, but has considered other options, the Times reports.

Senior Israeli officials tell me they expect Israel will get prior notice ahead of any U.S. strike against Iran. But they’re concerned that won’t be sufficient to fully prepare. Thus the order to the IDF to start taking preparatory steps under the assumption that such a scenario is possible.