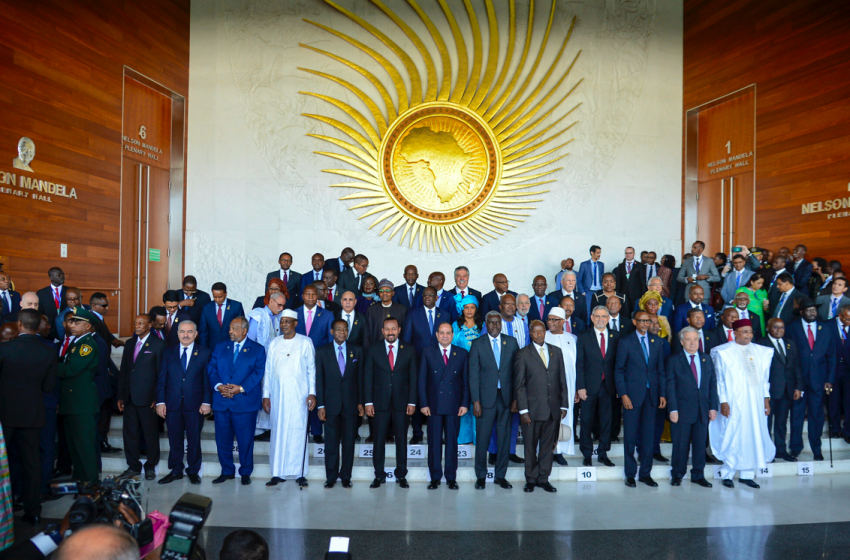 Israel attained official observer status at the African Union, after working towards the goal for nearly two decades.

Israeli Ambassador Aleli Admasu presented his credentials Thursday to Moussa Faki Mahamat, chairperson of the African Union Commission, at the African Union headquarters in Ethiopia’s capital Addis Ababa, according to statements from both sides.

“This is a day of celebration for Israel-Africa relations,” Israeli Foreign Minister Yair Lapid said in a statement from his office.

Observer status would enable Israel to further help the African Union battle the coronavirus pandemic and terrorism on the continent, the statement said.

Israel previously held observer status at the Organization of African Unity (OAU) but was long thwarted in its attempts to get it back after the OAU was disbanded in 2002 and replaced by the African Union.

“This corrects the anomaly that has existed for almost two decades and is an important part of strengthening the fabric of Israel’s foreign relations,” Lapid said.

“It will help us strengthen our activities on the African continent and with the member states of the organization.”

Israel currently has relations with 46 African countries “and has wide-ranging partnerships and joint cooperation in many different fields including trade and aid,” Lapid’s statement said.

Palestine already has observer status at the African Union, and Israeli diplomats have smarted at recent African Union statements on the Israeli-Palestinian conflict.

In May, Faki condemned Israeli bombardments in the Gaza Strip as well as violent attacks by Israeli security forces at the Al-Aqsa mosque compound in Jerusalem, saying the Israeli army was acting “in stark violation of international law.”

Faki used the 2020 summit to denounce then-U.S. President Donald Trump’s so-called peace plan for the Middle East, drawing applause in the African Union’s main hall when he said it “trampled on the rights of the Palestinian people.”

In his statement Thursday Faki underlined that the African Union “has been very clear on its position that in the issue of Palestine and Israel, a Two-State Solution is necessary for a peaceful co-existence.”

Faki’s spokesperson Ebba Kalondo said there are more than 70 non-African embassies and nongovernmental organizations currently accredited to the African Union.

Several African countries and organizations have voiced their strong opposition to Israel’s accession to the role.

In a strongly worded statement, the continental powerhouse, which last year held the annually rotating AU presidency, said it “is appalled at the unjust and unwarranted decision of the AU Commission to grant Israel observer status in the African Union”.

“The decision to grant Israel observer status is even more shocking in a year in which the oppressed people of Palestine were hounded by destructive bombardments and continued illegal settlements of the land,” South Africa’s foreign affairs ministry said, blasting the move as “inexplicable” and “incomprehensible”.

South Africa backs the Palestinian cause with formal diplomatic relations established in 1995, a year after the end of apartheid, and it downgraded its embassy in Tel Aviv in 2019.

The AU Commission took the “decision unilaterally without” consulting its members, according to South Africa.

South Africa will ask Moussa Faki Mahamat, chairman of the AU Commission, to brief member states on the decision and it hopes the issue will be discussed at the level of heads of states and governments.

“South Africa firmly believes that as long as Israel is not willing to negotiate a peace plan without preconditions it should not have observer status” in the AU, it said.

Similarly, Algiers on Sunday condemned the decision of the African Union to grant Israel observer status to the pan-African organization.

“Taken without the benefit of broad prior consultations with all member states, this decision has neither the vocation nor the capacity to legitimize the practices and behaviors of the said new observer which are totally incompatible with the values, principles, and objectives enshrined in the ‘Constitutive Act of the African Union,” said the Algerian Foreign Ministry in a statement, without explicitly mentioning Israel.

“The recent decision of the President of the Commission of the African Union (AU) to welcome a new observer who falls under its administrative prerogatives is not likely to alter the constant and active support of the continental organization to the just Palestinian cause,” declared the press release relayed by the official APS agency.

The ministry dismissed what it said was “media agitation around what is more of a ‘non-event.’”

Human rights organisation #Africa4Palestine has welcomed the government’s condemnation and objection to the African Union Commission’s “appalling” decision to allow the Israeli ambassador, Aleli Admasu, in Ethiopia an observer status at the African Union (AU).

“#Africa4Palestine agrees with the SA government that the decision is unjust and unwarranted and, furthermore, is dubious given that it was taken unilaterally without consultations of members,” said the organisation’s executive director, Muhammed Desai.

“As Africa4Palestine we are working with our partners in the South African government and civil society as well as allies in other African countries to ensure that this unilateral, irregular and improper decision is immediately halted and reversed.”

He said in the past, South Africa played a significant role in reversing the decision of the Africa-Israel Summit which was meant to take place in Togo in 2017.

“We fully support the South African government in their demand that the chairperson of the commission provide a briefing to all member states and for an urgent discussion by the executive council and the Assembly of Heads of States and Government,” said Desai.

“Earlier this year, when Israel murdered over 230 Palestinians, including more than 60 children and three pregnant women, the AU Commission’s chairperson condemned the Israeli attacks and reiterated that the Israeli army’s actions, including the continued forced, illegal evictions of Palestinians from their homes in East Jerusalem, are in stark violation of international law.”

He said Israel has not ended its violations of international law.

“So we wonder what Israel has bribed the AU Commission chairperson with to now change his posture and provide Israel with a free pass,” said Desai.

He emphasised that apartheid South Africa was not allowed into international bodies until it ended its violations of human rights.

“Similarly, Israel should not be allowed into the AU or any other body until it ends its violations of international law,” he said.

What are Israel’s interests?

Israel has in recent years increasingly pushed to play a larger role in Africa, and be a part of the next so called ‘scramble for Africa’.

But the ‘Israeli-African’ relationship has been set since the mid-1950s with Israel’s Foreign Minister Golda Meir visiting the country in 1963 and establishing the cornerstone for an Israeli Embassy in Nairobi. However, Africa’s relations with Jewish state was stopped between 1967 and 1973 when Israel occupied the West Bank, Gaza Strip, the Golan Heights and Sinai.

It became checkered relations for Israel never ceased to establish diplomatic relations with different African countries through aid programs and cooperation in many fields of agriculture, high-tech, security, defense systems and health systems. Being in a desperate need for development, these countries like Ethiopia, Burundi, Chad, Uganda, Rwanda and Liberia willingly took Israeli expertise and knowledge.

It is within this context that Israelis new observer status must be seen. Israeli diplomats and experts have already built relations below ground and its now ready to build on the macro-level, between states through a continent-wide organization that would have political and economic clout and be a regional lynchpin in a cooperative framework.

By rejoining the bloc Israel, which maintains relations with 46 out of 55 African countries, will be able to establish ties with a number of African states. In 2016, Israel renewed ties with Guinea for the first time since the 1967 Six-Day War. Three years later, it did the same with Chad, which had severed relations in 1972. In 2020, Israel normalised relations with Morocco, and announced the beginning of such a process with Sudan.

In recent years, Israel has tried to woo Africa, the second largest continent globally, to extend its influence within it. In 2017, the former Israeli prime minister Benjamin Netanyahu became the first non-African leader to address the Economic Community of West African States (ECOWAS) Heads of State and Government Summit in Liberia.

According to Martin Plaut, a former BBC Africa news editor and currently senior research fellow at Kings’ College London, “Israel has worked hard for many years to try to engage with African states, but its treatment of the Palestinians and Israeli Arabs have been an obstacle in the past. Egypt and Morocco, for different reasons, maintained low key, but positive, relations with Israel.”

There was no doubt that Israel, as it normalised ties with Sudan through the Abraham Accords, sent signals to other countries in the Horn of Africa to consider the move by establishing relations with more countries.

On the level of its membership as an observer country, Israel will be able to follow up with the AU agenda especially regarding issues related to Palestine as the move will give Israel a chance to vote against Palestine or create an African lobby to support its own vote.

“Having access to the AU will create more room for Israel to lobby for its political objectives and curb Palestinian influence in Africa. The AU has long maintained a critical stance towards Israel, and African states tend to follow the position coordinated between them under the umbrella of this institution when they cast their votes in other international fora, such as the UN General Assembly,” Gidron added to Al-Ahram Weekly.

Israel is a source of security knowledge and equipment to African countries, which makes the bigger part of its influence in the region besides investments and development plans in the region’s developing countries through MASHAV (the Foreign Ministry Agency for International Development Cooperation), but the extent of Israel’s influence in the AU is still to be discovered.

“How significant Israeli influence will be within the AU remains to be seen, but it is important to note that there is also a symbolic weight to its inclusion in this institution. Not all AU member states have diplomatic ties with Israel, but its acceptance as an observer state may make it easier for more African countries to normalise ties with it in the future,” Gidron noted. 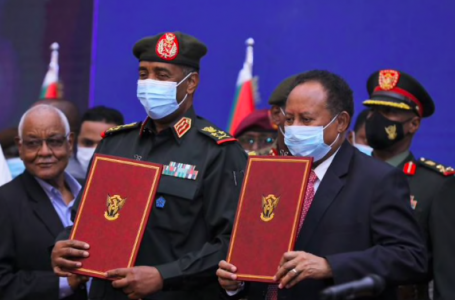