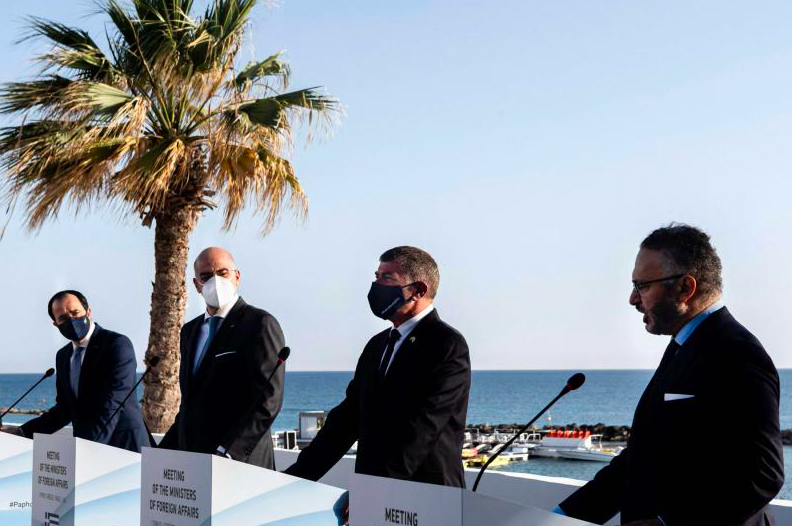 Israel and Greece have signed their biggest ever defense procurement deal, which Israel said Sunday would strengthen political and economic ties between the two countries as their air forces launched a joint exercise.

The agreement includes a $1.65 billion contract for the establishment and operation of a training center for the Hellenic Air Force by Israeli defense contractor Elbit Systems over 22 years, Israel’s defense ministry said.

The training center will be modeled on Israel’s flight academy and will be equipped with 10 M-346 training aircraft produced by Italy’s Leonardo, the ministry said.

“I am certain that (this program) will upgrade the capabilities and strengthen the economies of Israel and Greece and thus the partnership between our two countries will deepen on the defense, economic and political levels,” said Israeli Defense Minister Benny Gantz.

The Israeli and Greek air forces on Sunday launched a joint exercise in Greece, the Israeli military said.

In at least one past exercise over Greece, Israeli fighter planes practiced against an S-300 posted on Crete. The Russian-made air defense system is also deployed in Syria and Iran, Israel’s foes.

A source in the Hellenic National Defense Command said the S-300 had not been activated in the joint exercise that began Sunday.

Cyprus hosted a meeting Friday of top diplomats from Israel and the UAE, as well as Greece, for talks they said reflected the “changing face” of the Middle East.

“This new strategic membership stretches from the shores of the Arabian Gulf” to the Mediterranean and Europe, Israeli Foreign Minister Gabi Ashkenazi told a news conference in the coastal resort city of Paphos.

Standing alongside Anwar Gargash, adviser to Emirati President Sheikh Khalifa bin Zayed, he said their encounter was a sign of “the changing face of the Middle East”.

He called for a “strategic partnership in energy between the Eastern Med and the Gulf”, following last year’s historic normalisation of ties between Israel and the United Arab Emirates.

When Prime Minister Benjamin Netanyahu met in Nicosia in 2016 with the president of Cyprus and the prime minister of Greece and hailed the establishment of a new strategic axis in the eastern Mediterranean, they stressed in a joint declaration that this alliance was not an exclusive club and that other countries were welcome to join.
On Friday another country did join: the United Arab Emirates, which no one covering that meeting five years ago would have dreamed would be the country to take up the invitation.
The UAE sent Anwar Gargash, diplomatic adviser to  UAE President Sheikh Khalifa bin Zayed, to Paphos, Cyprus, to join the meeting with Foreign Minister Gadi Ashkenazi, his Cypriot counterpart, Nikos Christodoulides, and Greek Foreign Minister Nikos Dendias. Gargash is a senior UAE diplomat who served for 13 years – until February – as the UAE’s Minister of State for Foreign Affairs.
While Iran grabbed the headlines from that meeting – Ashkenazi highlighted the Islamic Republic in his public comments – another country was probably paying even closer attention to the meaning and significance of the parley: Turkey.
Ever since Israel signed the Abraham Accords in Washington in September with the UAE and Bahrain, the threat that Iran posed to Israel and the Gulf countries has widely been seen as the glue cementing those relationships.
While concern about Iran is a major regional concern that Israel has in common with the UAE, it is by no means the only one. The UAE is equally concerned about Turkey’s designs in the region, and the presence of Gargash at the Cyprus summit along with three other countries in the region most concerned about Recep Tayyip Erdogan’s Turkey sends a clear message to Ankara.

The agreement will certainly have an impact on the power dynamics in the Mediterranean, as it solidifies the axis of Israel, Greece, Cyprus and the UAE as powers that contain Turkey’s power in the Middle East. However, in light of Egypt’s recent gravitation towards Turkey, we may see an unexpected power struggle.

Turkey’s geopolitical and military might must also not be under-estimated. In a recent study, The Maritime Policy & Strategy Research Center of Israel’s Haifa University concluded that the Turkish Navy is now the strongest maritime force in the region.

Complementing this, Turkey’s ties with Israel are not in a good state, despite initial optimism. Turkish President Recep Tayyip Erdoğan blasted the Israeli government on Friday, saying that he knew well how Israel is “an enemy of Islam”, over the country’s most recent air strike on targets in Gaza.

Early on Friday, Israeli aircraft hit three facilities operated by Hamas, the militant group ruling Gaza, including weapons manufacturing and smuggling sites, in response to a previous rocket attack, according to an Associated Press report.

The Israeli military said Palestinian militants fired two rockets from Gaza into the country’s south on Friday, within 24 hours.

“We know Israel is an enemy of Islam. Unfortunately, Israel does not change these habits,” Erdoğan said. “We want all of humanity to follow closely Israel’s hostility against Islam evaluate (the situation). Surely, as long as Israel maintains this attitude, it is impossible for bilateral relations to reach a level we would like.”

The Turkish Foreign Ministry also issued a statement on “Israel’s attacks on Gaza” and said, “Last night’s air strikes conducted on Gaza by Israeli combat aircraft constitute the latest example of the policies of aggression of the Israeli government.”

The ministry expressed concern about “Israel’s policies of oppression and violence against the Palestinian people” increasingly continuing during Ramadan.

Israel therefore signing a defense agreement with Greece, at a time when tensions are high with Turkey, shows how Israel is worried about the Turkish threat, especially to its energy interests.