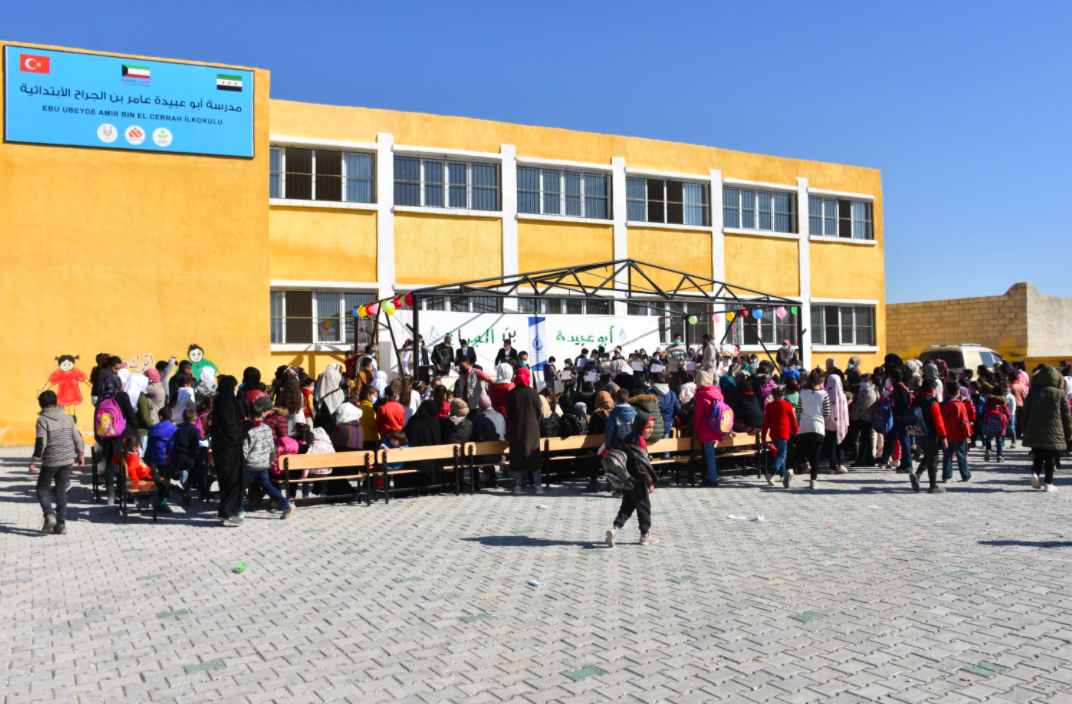 Turkey is gradually integrating its education system into various cities in Northern Syria, which were occupied by Turkish forces in various military operations. In August 2016, the Turkish military seized 2,055 square kilometers of Syrian territories through Operation Euphrates Shield. It forces are still deployed there alongside pro-Ankara Syrian factions. In 2018, the military launched Operation Olive Branch in Afrin that targeted areas controlled by the Syrian Democratic Forces (SDF). It carried out a third operation in the area east of Euphrates in October 2019.

With Turkey’s support, courses on both religion and the Turkish language are available for the residents in the Syrian towns of Tal Abyad and Ras al-Ain.

Locals of the towns, who previously lived under the PKK group’s Syrian offshoot, the YPG, during Turkey’s Operation Peace Spring in 2019, reportedly demanded access to language and religious courses.

A statement released by the Governorate of Şanlıurfa on Turkey’s southeastern border said that the teaching of the Quran and Islam would be carried out with the support of the Şanlıurfa Provincial Office of Mufti.

Nearly 240 students who achieved academic success have been awarded by the officials.

Moreover, the Turkish language courses put together by Public Education Centers have become popular among locals. Teachers and local security forces also attend the Turkish courses with the support of Yunus Emre Institute (YEE), a Turkish cultural institution established in 2007.

In addition to this, Ankara has announced that it will open a health care vocational school and a medical faculty in the Cobanbey (Al-Ra’i) town of Syria near the Turkish border.

President Recep Tayyip Erdogan signed the decree, which was published in the Official Gazette on Saturday.

The decision stated that a the Cobanbey Faculty of Medicine and Cobanbey Vocational High School of Health Services would be part of campuses of the Turkish University of Health Sciences in Istanbul. Saturday’s decree is a precedent in the region and interpreted as an official declaration of Turkey’s hegemony over some parts of Syria.

Since then, Turkish authorities have opened branches of the National Postal Authority with transactions using the Turkish lira. They also opened schools and added the Turkish language to the curriculum under the pretext of helping Syrians in areas they run. The governor also laid the foundation stone for the new obstetrics and gynecology hospital, which will be established in Tal Abyad.

Turkey continues to provide support in various fields, including transportation, infrastructure, education, security and health to Tal Abyad, which was seized from the SDF. These are strong signs that Turkey aims to integrate these Northern Syrian regions into Turkish society, which could convince Syrian refugees in Turkey to return to these Syrian provinces, as well as limit the chances of another future refugee crisis from these cities. Another possibility is that Turkey is using such methods to increase and solidify its presence in Syria, by introducing Turkish cultural elements into Syrian society, and gaining the favor of the Northern Syrian population.

Another contribution that Turkey is facilitating to Syria is humanitarian aid.

With the peaceful and secure environment established in northern Syria’s Tal Abyad and Rasulayn districts after Turkey’s Operation Peace Spring, the Syria Support and Coordination Center (SUDKOM), a division of the governor’s office of Turkey’s Sanliurfa province, continues to carry out humanitarian activities “without any let-up”.

At least 426 humanitarian aid activities were carried out in 2020 by Turkey’s Red Crescent in coordination with the Disaster and Emergency Management Authority (AFAD) and support from other NGOs, according to the governor’s office.

Furthermore, an official of a Turkish humanitarian agency said they built 14,000 houses for Syrians who are in desperate conditions due to the ongoing civil war in 2020.

Thanks to the reinforced concrete and briquette dwelling projects of the Istanbul-based Humanitarian Relief Foundation (IHH), thousands of families have found the opportunity to live in warm houses rather than makeshift tents.

A total of 14,000 briquette houses were handed over, while construction of 6,000 reinforced concrete houses continues, Selim Tosun, the IHH media manager for Syria, told Anadolu Agency on Thursday.

“Warm homes were provided to thousands of families in 39 different areas,” Tosun said, adding that they are active in the region “to heal the wounds of war victims.”

Despite Turkey’s efforts to increase their sphere of influence in Syria, several obstacles lie ahead. The first is Russia and Iran’s conflicting interests. Turkey has thus far engaged in negotiations with Russia in order to find a solution to their conflicting interests in Syria, and as a result, been organizing joint patrols in Northern Syria. However, as both Russia and Turkey are increasingly looking to expand their influences, an eventual conflict is inevitable.

Nevertheless, Turkey, Iran and Russia urged the Syrian Constitutional Committee on Thursday to seek compromise and consensus among the sides to the decade-long civil war.

Following consultations on the margins of the fifth meeting of the Constitutional Committee in Geneva, the three countries released a joint statement underlining their support for a sovereign, independent and united Syria. Welcoming the fifth meeting of the committee in Geneva, the statement underlined that the body had been created by the Astana guarantor nations to support efforts for a political and peaceful solution to the fighting.

It also said that the committee should work independently from “foreign interference” and aim to develop a consensus between its members to gather the broadest possible support among Syrians. The next international meeting on Syria in the Astana format will take place in Sochi on Feb.16-17, 2021, the statement concluded.

The Astana peace process to end the Syrian conflict was launched in January 2017 by Turkey, Russia and Iran. Syria has been ravaged by a multifaceted civil war since early 2011, when the regime cracked down on pro-democracy protesters. Hundreds of thousands of people have been killed and more than 10 million displaced, according to UN estimates.

Interestingly, however, Turkey’s investment in education, infrastructure and humanitarian aid in Northern Syria could be the factor that makes it maintain an important role in Syria whatever the result of the peace process, something that could not be said for Russia or Iran to the same extent.

Another obstacle for Turkey is the YPG, and Biden’s possible renewal of support of the group, which could re-establish its strong presence in Northern Syria. Parallel to the new U.S. administration under Joe Biden taking office, terrorist attacks in Syria’s north have increased, indicating that Turkey’s concerns over U.S. cooperation with the YPG are not without reason.

Car bombs killed at least 20 people last week in two separate incidents in terrorist attacks that took place in Syria’s northern Azaz, al-Bab and Afrin provinces. Moreover, an improvised explosive device (IED) strapped to a motorcycle exploded, killing two civilians and wounding two more on Jan. 26 in the northern Syrian border town of Tal Abyad, controlled by the Syrian opposition, while on Jan. 17 a bomb-laden vehicle exploded again in Azaz, killing at least one civilian and wounding six others. Two weeks before that another car bomb killed at least five near a vegetable market in Ras al-Ain.

Though the U.S. condemned the trio of terrorist attacks last week, Washington failed to make any reference to the terrorists or review its relations with the group despite the fact that local security forces have blamed the YPG for the deadly assaults.

YPG forces control a large part of the northeast of the war-torn country, but Assad regime forces are also present there, including in the main regional cities of Hassakeh and Qamishli.

Turkey has continued to target YPG militants in strikes this year, which has limited the chances of the latter regaining any ground. Last week, Turkish security forces “neutralized” five YPG/PKK militants in a protected area across Turkey’s southern border with Syria, the National Defense Ministry announced Thursday.

However, if the US reignites its military support of the YPG, it could become harder for Turkey to build a stable Northern Syria under Turkish influence.