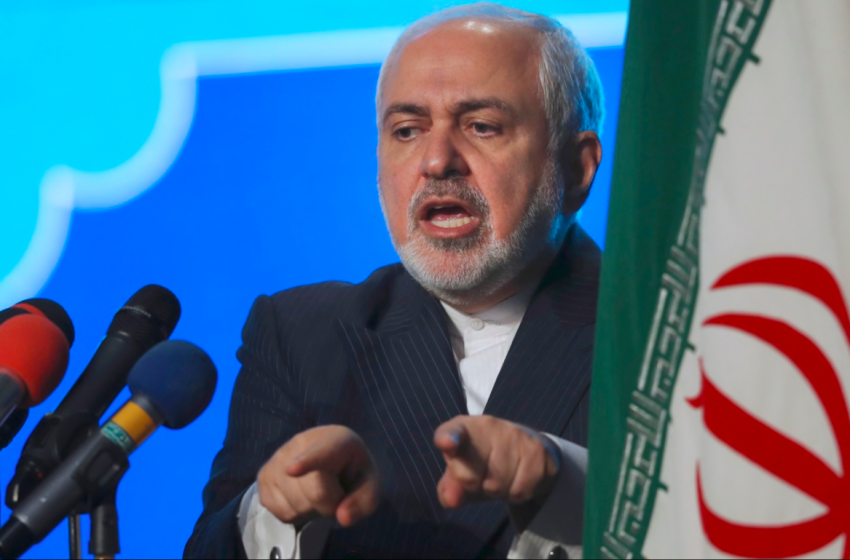 A leaked audio tape in which Iran’s Foreign Minister, Mohammad Javad Zarif, bemoans that the Revolutionary Guards dominate the country’s foreign policy and took it into Syria’s civil war at the behest of Russia is making the rounds, with many on social media expressing shock and bewilderment. The leaked comments display a concerning rift between Iran’s powerful revolutionary guard and the more moderate foreign minister and president, which could have significant implications.

Some of the revelations confirm what many Iranians have suspected all along. What is surprising is that they came from Mr Zarif, an experienced diplomat who is normally very guarded and is a moderate by Iranian standards.

It is not clear who has leaked the tape, though it comes as Iran prepares to hold a presidential election and internal power struggles reach new heights. Mr Zarif has said he is not a candidate to succeed President Hassan Rouhani, but hardliners do not trust him and want to eliminate any chance of that happening.

What is clear is that the tape will land Iran’s top diplomat in big trouble with hardliners and the Supreme Leader, Ayatollah Ali Khamenei, who has the final say over all government matters and controls the Revolutionary Guards, the country’s most powerful security force.

It appears that the three-hour audio tape, which has reached the BBC and other news outlets abroad, is taken from a video of a seven-hour interview that was conducted more than two months ago as part of an oral history project covering President Rouhani’s two terms in office.

In the tape, Mr Zarif is twice heard saying he believes that his comments will not be heard or published for many years.

The minister repeatedly complains that the Revolutionary Guards have made diplomacy and Iran’s foreign policy subservient to their battlefield needs in the region.

He specifically mentions how General Qasem Soleimani – the former commander of the Revolutionary Guards’ Quds Force, who was killed in a US drone strike in Iraq in January 2020 – often went to see him with requirements.

He recalls how Soleimani wanted him to take particular positions in meetings with the Russian foreign minister, and says the general effectively took Iran into the war in Syria because Russian President Vladimir Putin wanted Iranian forces on the ground to complement the Russian air campaign in support of the Syrian government.

He also complains that Soleimani used Iran’s national carrier, Iran Air, for military flights to Syria at great risk and reputational cost to the country, confirming reports that civilian aircraft were used for gun-running and troop transportation.

Mr Zarif also says Russian Foreign Minister Sergei Lavrov did everything he could to stop Iran from agreeing to a nuclear deal with six world powers – including Russia – in 2015. He alleges that Russia never wanted to see Iran mend fences with the West.

His words are surprising, as it is generally understood that he has good relations with Mr Lavrov and that Russia is a close ally of Iran. The leak also comes at a time when Iran is engaged in indirect talks with the US in Vienna with the aim of reviving the nuclear deal, which has been close to collapse since then President Donald Trump reinstated sanctions in 2018 and Iran began breaching its commitments in response.

Mr Zarif says the Revolutionary Guards never wanted the agreement and did everything they could to stop it. He mentions the testing of a missile on which they had written “Israel should be wiped off the Earth” in Hebrew and the detention of 10 US sailors on board two patrol boats in the Gulf in early 2016 as examples of their efforts to scupper the deal.

Mr Zarif complains that the Revolutionary Guards sidelined him on many occasions.

He mentions the early hours of 8 January 2020, when Iran attacked an Iraqi military base housing US forces with more than a dozen ballistic missiles in retaliation for the killing of Qasem Soleimani. He says he only found out about the missile attack two hours after it happened.

Later that day, he adds, when a Revolutionary Guards air defence unit shot down, apparently by mistake, a Ukrainian passenger airliner that had just taken off from Tehran, killing all 176 people on board, commanders only wanted him to deny Iranian culpability.

There has been speculation that it was leaked by Zarif’s rivals as a political death blow or to thwart a possible presidential bid to succeed Rohani, who is in his second and final term.

“This is the Iranian equivalent of an October surprise — a deliberate leak timed to prevent the pro-engagement forces of Iranian politics from having any say in the upcoming elections,” said Ali Vaez, director of the Iran Project at the International Crisis Group (ICG).

“The country’s policies are made of different economic, military, social, scientific and cultural plans, including foreign relations and diplomacy,” Khamenei said in televised remarks.

Saying “that one part denies the other or contradicts … is a big mistake that must not be perpetrated by officials of the Islamic republic,” the supreme leader added.

Khamenei did not explicitly cite the leaked audio or Zarif’s name, but the comments, in the last few minutes of an hourlong speech, were clearly targeted at the foreign minister.

The supreme leader emphasized that “nowhere in the world is foreign policy devised by the foreign ministry.”

The diplomatic apparatus is only “the executor” of decisions made at higher levels, he said, noting that decisions are made by the Supreme National Security Council.

Hours before Khamenei’s speech, Zarif had taken to Instagram to seek forgiveness from Soleimani’s family.

Then, late Sunday, the foreign minister said that Khamenei’s remarks “are the final word and the endpoint for expert discussions.”

“I hope that with the help of God, me and my colleagues will be able to work with one mind and heart alongside other public servants for the perfect implementation of the supreme leader’s orders,” Zarif added.

He said Sunday he was “very sorry” that his “personal views” were published and exploited by Iran’s “ill-wishers” and upset the supreme leader.

Who is being blamed?

The Iranian foreign ministry’s spokesman has said Mr Zarif’s comments in the audio tape have been taken out of context and that, if necessary, it will publish the whole interview.

According to the spokesman, the foreign ministry does not have the recording in its possession and that its safekeeping is not the ministry’s responsibility.

Meanwhile, Iranian President Rouhani, who rejected Zarif’s effort to resign in 2019, claimed that the recording had been stolen and deliberately published to create conflict within the government as the nuclear talks continue in Vienna. His administration only has a limited amount of time to reach an agreement. The presidential election is scheduled for mid-June and Rouhani is barred from running for a third term.

The president has accused hard-liners of responsibility for the leak. “Why are certain things happening now that we are close to success?” ked during a recent Cabinet meeting. Hard-liners are readying for the presidential race. In March, Revolutionary Guard Commander Saeed Mohammad, who had until recently headed the military organization’s Khatam al-Anbiya engineering firm, announced his candidacy.

President Rouhani, on Wednesday said the audio leak was timed to sow discord in Iran, just as the Vienna talks were “at the height of their success.”

Nevertheless, Khamenei has clearly not taken the leak lightly, and this could spell the end of Zarif’s long diplomatic career in Iran.

But in a reflection of Iran’s complicated political scene, others have suggested that Zarif and his allies were behind the leak in order to boost his visibility and highlight his willingness to question state policies.

Either way, the leaks have clearly revealed that there is a growing rift in Iran’s government between the hardliners and the moderates, which could prove to be a monumental political challenge for the Islamic government in the country.