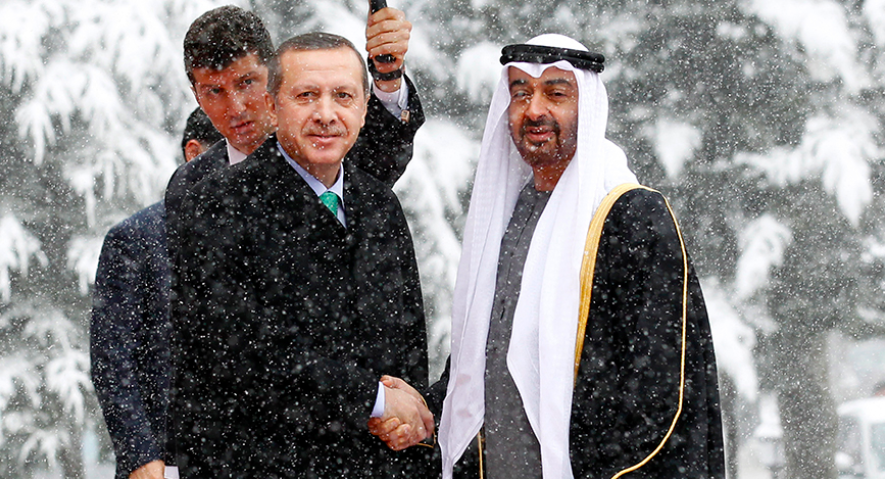 Turkey could be the real target of the UAE-Israel deal

Many believe that limiting Iran’s is the main target of the alliance, but it now appears Turkey could be the real target. Not a day goes by that the UAE minister of state for foreign affairs Anwar Gargash tweets about Turkey’s allegedly imperialistic ambitions in the region, accusing Turkey of meddling in Arab affairs. This is why it is unsurprising that President Recep Tayyip Erdoğan vocally criticized the deal between Tel Aviv and Abu Dhabi, threatening to recall the Turkish ambassador in Abu Dhabi or even downgrade diplomatic relations. Turkish officials are aware of the group that Turkey confronts in the region, and the UAE is their spokesperson. An asymmetric alliance of countries that share the common goal of limiting Turkey’s influence in the region has been brewing for some time. The heralding of existing clandestine ties between these two countries only goes to show that the alliance is now solidified. Israel and the UAE, alongside Egypt, Greece, Saudi Arabia and France, all share the goal of confining Turkey’s reach in the Middle East and Eastern Mediterranean.

In fact, after the deal was signed, Israeli officials publicly acknowledged that they viewed Turkey as a bigger threat than Iran. Israel has been coordinating with Egypt, the UAE and Saudi Arabia to demonise Turkey, which Israel’s Mossad Chief Yossi Cohen believes a “bigger threat”. Roger Boyes wrote for the Sunday Times that Cohen discussed the Turkish threat with intelligence officials from Egypt, the UAE and Saudi Arabia about two years ago. “Iranian power is fragile,” Boyes reported Cohen telling officials from the three Arab countries, “but the real threat is from Turkey.” According to Boyes, Cohen’s point “was not that Iran had ceased to be an existential menace but rather that it could be contained: through sanctions, embargoes, intelligence sharing and clandestine raids.” However, “Turkey’s coercive diplomacy, its sloppily calculated risk-taking across the Middle East, posed a different kind of challenge to strategic stability in the eastern Mediterranean.”

Furthermore, Turkey is considering suspending diplomatic ties with the United Arab Emirates and withdrawing its ambassador after agreement between the Gulf state and Israel to normalise ties was revealed, President Recep Tayyip Erdogan said. The Turkish foreign ministry also said history would never forgive the UAE’s “hypocritical behaviour” in agreeing such a deal, which recasts the order of Middle East politics. Turkey’s Foreign Ministry had earlier said Palestinians were right to reject the deal in which the UAE betrayed their cause. The latest deal has therefore heated up the Turkey-UAE geopolitical rivalry.

The UAE supporting Greece in the Mediterranean

Another sign of the UAE-Turkey geopolitical rivalry heating up, is the UAE’s involvement in the Greece-Turkey tensions on the East Mediterranean. The UAE is sending four F-16 fighter aircraft for joint training with the Greek military on Crete, an Athens-based daily newspaper reported Friday.

The aircraft will partake in training exercise with Greece’s military over the Eastern Mediterranean amid heightened tensions with Turkey, which has deployed naval vessels to escort a hydrocarbon exploration ship to waters claimed by Greece. The head of Greece’s Hellenic National Defense staff spoke with his Emirati counterpart, Lt. Gen. Hamad Mohammed Thani Al Rumaithi, on Thursday, Kathimerini reported.

The deployment comes as Turkey also prepared to announce its largest-ever natural gas discovery in the Black Sea, and just a week after the UAE announced its formal recognition the state of Israel in a historic deal brokered by the US.

In addition to this, the UAE hailed the controversial maritime agreement between Egypt and Greece that defines their exclusive economic zones in the east Mediterranean, and countered Turkish territorial claims, as a “victory for international law”. The Minister of State for Foreign Affairs Dr Anwar Gargash welcomed the agreement in a message on Twitter a day after the Greek and Egyptian foreign ministers signed the deal in Cairo that followed years of negotiations between their countries. “The signing of the maritime border demarcation agreement between Egypt and Greece is a victory for international law over the law of the jungle,” Dr Gargash said. “The international legal system is the firm foundation that governs relations between states and preserves peace and security. Civilised nations may not legitimise political intrusion at the expense of the foundations that govern international relations.”

Libya the main area of conflict

The spark of the direct clash between the UAE and Turkey has been the conflict in Libya. Turkey supports the UN-recognized GNA, while the UAE along with Egypt, is the main backer of the opposing LNA, led by warlord Haftar.

Turkey has been very successful in repelling Haftar since it started its involvement in the conflict, which has angered the UAE, and probably was one of the factors that contributed to the UAE’s peace deal with Israel.

Most recently, speaking to the Libyan television channel February in an interview, Abdulhadi Dirah, the spokesman for the army’s Sirte-Jufra Joint Operations Unit, commented on the UAE’s foreign policy toward Arab countries and said that the Gulf country has caused deep problems in Yemen and Syria. Reminding that the UAE tried to create chaos in both Tunisia and Algeria, Dirah added that it has also supported the illegitimate eastern-based forces loyal to putschist Gen. Khalifa Haftar in Libya since the beginning of the conflict. Dirah, underlining that the UAE aims to militarize Libya as it did Egypt, said: “All the problems in the Arab countries have a link to the UAE. The UAE government is a cancerous cell among Arabs.”

Turkey had also lashed out at the UAE on Friday over what it called “malicious” actions in Libya “Abu Dhabi does what it does in Libya, does what it does in Syria. All of it is being recorded. At the right place and time, the accounts will be settled,” Defense Minister Hulusi Akar said in an interview with the Qatari TV station Al Jazeera. “It is necessary to ask Abu Dhabi where this hostility, where these intentions, where this jealousy comes from,” he said, according to the account of the interview published on the Turkish Defense Ministry’s website. Tensions have been steadily rising in the Libyan conflict in recent weeks, with Egypt threatening it would launch a military intervention if GNA forces try to capture their next target, the coastal city of Sirte, currently held by Haftar’s militias.

It begins to be clear in Turkey’s eyes that the main driving force from Haftar’s side in Libya is not Egypt, but the UAE, and the recent exchange has taken the Turkey-UAE geopolitical rivalry to the next level.