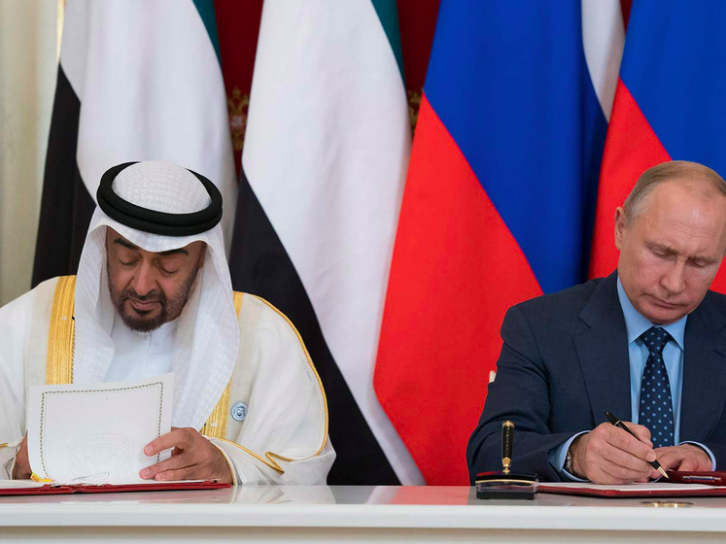 Sheikh Abdullah bin Zayed Al Nahyan, Minister of Foreign Affairs and International Cooperation, stressed that the UAE and the Russian Federation share comprehensive strategic ties and are cooperating to create a safe, prosperous and modern region.

This came as the two ministers met over a business dinner as part of the current visit by Sheikh Abdullah to Russia. The pair underlined the two countries’ determination to explore more prospects for investment cooperation across all fronts, particularly in the fields of trade and economy.

He made this statement during the press conference that was held jointly with Sergey Lavrov, Minister of Foreign Affairs of the Russian Federation, during Sheikh Abdullah’s official visit to Russia.

“My friend, Sergey Lavrov, I am grateful for my meeting with you and the kind words about my country. In the UAE, we are proud to have comprehensive strategic relations with the Russian Federation. During the COVID-19 pandemic, we realised that our relations with Russia will witness significant development in the coming years,” Sheikh Abdullah said.

The two ministers also discussed the efforts made by the two nations as part of the global fight against Covid-19 and underlined the importance of supporting international endeavours to ensure delivery of Covid vaccines to all countries of the world.

Sheikh Abdullah emphasised the privileged relations between the UAE and Russia and the strategic partnership between the two friendly countries.

The Russian minister likewise hailed the strategic bonds between the two nations, and affirmed his country is looking forward to effectively participating in Expo 2020 Dubai, set for next year. He expressed best wishes for a successful organisation of the global event.

In his response to several questions raised by representatives of Russian media outlets on maintaining security in the Gulf Cooperation Council (GCC) region, Libya, the Palestinian cause and the Gulf crisis, Sheikh Abdullah stated, “We welcome Russia’s efforts to ease tensions in the region, and our objective is its modernisation. We can work together to create modern, developed, advanced and prosperous countries.”

The UAE and Russia’s cooperation in Libya already noticed

Interestingly, earlier this month, the Pentagon said that the UAE is funding Russian mercenaries to fight the US-backed government of Libya as the Trump administration prepares to sell the Gulf state $23 billion of weapons.

A report by the Pentagon’s inspector general determined that the UAE is the main financial backer of Wagner, the Russian mercenary group in Libya, as its agents fight against the internationally recognised government in Tripoli, in the first official public linking of the two.

UAE has been present in Libya where it backs rebel administration and rogue retired Gen. Khalifa Haftar opposed to UN-backed Government of National Accord (GNA) headquartered in Tripoli.

Haftar, also backed by Russia, Egypt, Saudi Arabia, France, has contracted the Russian private military company during his military offensive to unseat the GNA. The GNA managed with the help of Turkey and Qatar to foil the military campaign in May. The report said the UAE has used the Russian presence to blur its engagement in Libya. “The increased Russian presence in Libya has also coincided with Emirati drawdowns, further sparking suspicions. As cargo shipments began to tick up and more Turkish troops entered the country, the UAE withdrew its equipment from the al-Khadim airbase near Benghazi and allowed Russian forces to take over the facility,” it said.

It is therefore clear that the US has already noticed the UAE’s strengthening cooperation with Libya. The question is, why is the US not reacting, and continuing the sale of F35s when such a situation is ongoing?

The US approves sales of F35s despite this

Despite the US’s evident awareness of the UAE’s cooperation with Russia, and its increasing ties in recent month, the Senate decided to approve the sale of F35s to the UAE.

In one of the largest arms deals of its four-year term, the outgoing administration has approved $23 billion in stealth-capable F-35 jets, unarmed drones and other weapons to the Gulf ally.

Splitting mostly on party lines, opponents failed to convince a threshold of 50 senators in two procedural votes that Trump was acting hastily before President-elect Joe Biden takes over next month.

Republican Senator Roy Blunt said that selling weapons to the UAE supported US jobs and provided “reinforcement of our friends who see common enemies and are working directly to move their country and their region in a much better direction.”

Israel has historically opposed the sale of the jet to any Arab nation, considering it a military advantage. But Prime Minister Benjamin Netanyahu dropped objections as the UAE moved in September to recognise Israel.

Israel’s ambassador to the United States, Ron Dermer, said earlier this month that Israel is “very comfortable” with the sale of F-35 planes to the UAE.

The UAE’s confidence in growing ties with Russia, even publicly, as well as the US and Israel’s continuation of sales of F35s to the Gulf state, shows how important the UAE is to the US and Israel in countering the Iranian threat. The US has now for some time seen the UAE as its new most reliable partner in the Gulf, replacing Saudi Arabia, due to the small state’s rise to geopolitical power, and more success in the military field compared to its Saudi counterpart, especially in Yemen. The UAE’s geographical position as a direct neighbour to Iran makes it even more strategically important to the US, whose military bases in the UAE are of paramount importance due to their proximity to Iran.

Iran’s nuclear program, and increasing sphere of influence have made the nation the US and Israel’s main threat in the Middle East, and the UAE has therefore become the former powers’ most important ally. It therefore appears that the UAE has realized the magnitude of its importance to the US and Israel, and is taking advantage of it to get away with geopolitical moves that it would succeed in achieving in different circumstances.

This also points to the possibility that Iran has become a larger geopolitical threat than Russia in the US’s eyes, something that has become increasingly evident under the Trump administration.

Nevertheless, the UAE continues to expand its geopolitcal reach through its realization of its strategic importance, and increased foreign intervention.