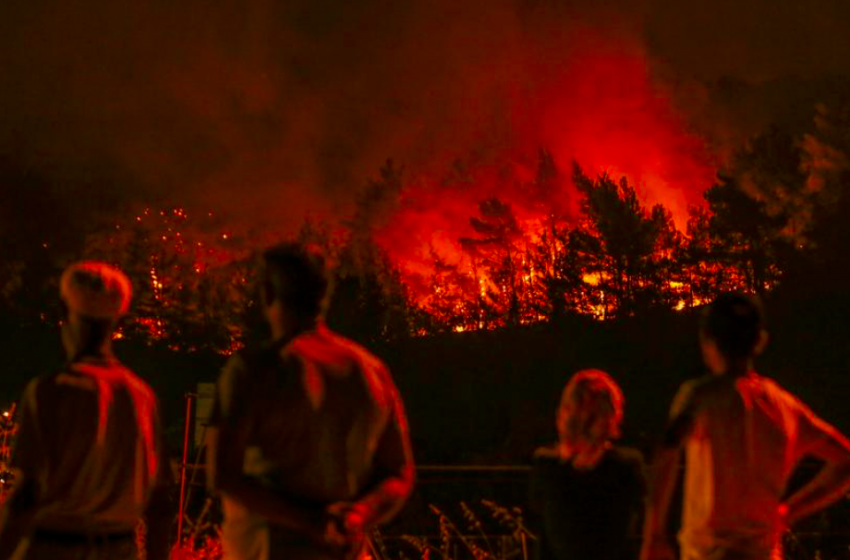 Turkey has mobilized and united in efforts to fight against wildfires that have wreaked havoc on swathes of the country’s south and Aegean region, as the Agriculture and Forestry Ministry said 107 of 112 fires have been brought under control as of early Aug.

The blazes began in early July 28 in four separate locations, including the most destructive in the Manavgat district of the southern province of Antalya. The fires broke out almost in tandem across other Mediterranean provinces, then across some 40 provinces and districts in 50 hours.

Authorities announced late Sunday that 122 out of 129 forest fires in 35 provinces were under control. Nevertheless, fires ravaging popular tourist resorts Manavgat and Marmaris are still raging, with the death toll rising to eight on Sunday.

Firefighters on the ground tirelessly fight the flames with the aerial assistance of water bomber planes and helicopters, but the extinguishing efforts from air pause at night. On Monday morning, planes and helicopters resumed their operations in Marmaris and Köyceğiz, two towns in the southwestern Muğla province. Strong winds fanned the flames in the province, and forest fires rapidly advanced in Marmaris’ seven neighborhoods. In Köyceğiz, a rural neighborhood is under threat of a massive forest fire.

In Manavgat, the situation is grave as new fires rage on in the area. On Sunday evening, a new fire broke out in the Gündoğdu neighborhood, which was already fighting the fires that broke out last week. Locals joined extinguishing efforts. In some areas, people started patrolling the neighborhoods near forests upon hearing rumors of arson.

Speaking in Marmaris, President Recep Tayyip Erdoğan said on July 31 that teams from Muğla, other provinces, and Azerbaijan continue their work in the region.

Several countries have come to the aid of Turkey in recent days.

Erdoğan thanked Putin for Russia’s allocation of five firefighting aircraft and three more helicopters to support Turkey’s fight against forest fires across the country, according to a statement.

Iran is also sending firefighting aid, including aerial vehicles, to Turkey to help control ongoing fires across the country, the Iranian ambassador to Turkey said on Saturday.

Turkey’s defence ministry on Saturday tweeted photos of an Iranian firefighting plane sent to the neighboring country, saying that efforts to extinguish the fires in Marmaris continue.

“Water was supplied to the firefighting plane sent from Iran with a 30-ton water tanker at our Aksaz Naval Base Command,” the tweet said.

Most recently, the European Union announced on Monday that it would send three air tankers to Turkey to combat forest fires that have been burning near the Mediterranean coast in Antalya since last Wednesday, saying it “stands in full solidarity with Turkey at this very difficult time.”

The EU aircraft  — one from Croatia and two from Spain — will operate alongside teams from Russia, Iran, Ukraine and Azerbaijan in assisting locals and Turkey’s regional and national efforts.

Is the PKK involved?

Multiple investigations are underway over the causes of fires in Manavgat and other towns and provinces, while authorities voiced suspicion that points to the terrorist group PKK’s involvement. Mustafa Yılmaz, a resident of Gündoğdu, told Demirören News Agency (DHA) that he and a few other locals had spotted two people around a small fire in the area where a large fire broke out and notified authorities.

Interior Minister Süleyman Soylu said law enforcement agencies were investigating the causes of the fires, and they had special teams of investigators in place. “We received about 300 tip-offs about the causes of the fires. We have several people in detention, but ultimately the judiciary will decide whether they are guilty (of starting fires). We have information about sabotage attempts, about negligence which might have caused the fires,” he said. Soylu said that the terrorist group PKK was working to burn forests, businesses and vehicles of civilians and since January and that they thwarted more than 300 such attempts. On the subject of evacuation efforts, Soylu commented that 10,000 people were evacuated in Muğla alone.

In 2020, on the anniversary of the PKK leader Abdullah Ocalan’s expulsion from Syria on October 9, 1998, major fires exploded across Turkish cities on October 10, burning down approximately 400 hectares of forests, empty residential buildings, and several dozen animals.

Children of Fire Initiative, a PKK affiliate group, claimed responsibility for the fires in a statement published on Nuce Civan, an online pro-PKK publication.

“We salute the holy fire,” the group said in reference to October fires.

PKK, the terror group that has been fighting the Turkish state since 1984, a couple of years after the group was founded, did not deny the claim. In the wake of their battle, it has left more than 40,000 killed, including civilians so far. People’s United Revenge Militia (HBIM) is another PKK-linked group that claimed responsibility for fires in the past.

While the group launched its first attack in Turkey in 1984, the group adopted forest fires as a strategy in the 1990s. Greece, where some PKK terrorists were trained, also had its share in the deliberate fires by PKK, as the group set alight the forests that attract Turkish tourists, according to a leaked Turkish intelligence report.

Now, the Children of Fire Initiative, a subgroup of the Kurdistan Workers Party (PKK), made an announcement claiming responsibility for the fires devastating southern Turkey.

Their announcement claiming responsibility was published by Nûçe Ciwan, which in Kurdish (Kurmanji), Arabic, Turkish, German and English with the slogan of “Dynamism of Youth.”

The PKK subgroup, in which Turkey recognises the entire group as a terrorist organisation, said the reason for starting the forest fires was in response to “the Fascists Turks, who invaded and exploited our country, pillaged our nature by burning it” and “spewed blood, death and brutality on us Kurds, and supported the army, police and government of the colonial Turkish Republic.”

In the announcement, the PKK subgroup declared a “Collapse MOVEMENT”.

“You will see our movement of anger and vengeance in the burning cities, the sky covered with ash and smoke, the mountains and plains engulfed in flames,” the announcement said before listing many Turkish massacres against the Kurds.

The group also listed anti-Kurdish policies and normalisation in society such as forceful Turkification, controlled media and football players saluting the Turkish army when fighting the Kurds

Although the group claimed responsibility for the fires, there is still lacking first hand evidence to substantiate this claim, but the PKK’s history in starting fires has led many to believe that they indeed are behind the fires. Nevertheless, it will only be known for certain after investigations have been concluded.