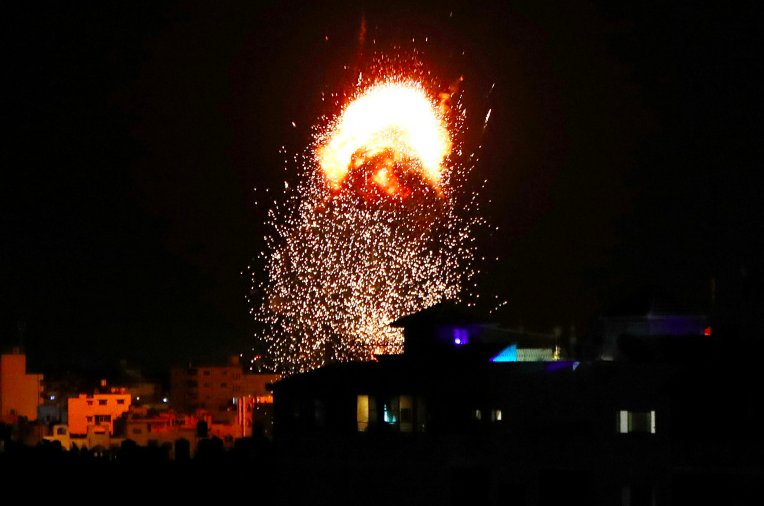 Israel said its fighter jets targeted a weapons manufacturing site in the Gaza Strip overnight on Friday in the latest unrest since a ceasefire ended May’s attacks.

Security sources with Hamas said the raids hit training sites and no casualties were reported.

The Israeli army spokesperson stated that the air raid came in response to the launching of incendiary balloons from the Gaza Strip towards the surrounding Israeli settlements.

It was the third time Israel has carried out air attacks in Gaza since the end of the 11-day offensive it launched in the blockaded territory in May this year.

The conflict killed at least 256 Palestinians, including 66 children, according to Gaza authorities.

In Israel, 13 people, including two children, were killed by rockets fired from Gaza, the police and army said.

Egyptian and international mediators have been trying to shore up the informal ceasefire that ended the most recent war.

There have been multiple flare-ups since the ceasefire, including a series of balloon launches last month. Israel has responded with air strikes.

Following an exchange of fire on June 18, Israeli army chief ordered forces to be ready “for a variety of scenarios including a resumption of hostilities”.

The Gaza Strip has been under an Israeli-Egyptian blockade since 2007, after Hamas – which was democratically elected the year before – took control of the coastal enclave.

At least two million people – half of them under the age of 18 – live in the territory, one of the world’s most densely populated area, in dire humanitarian conditions.

Hamas spokesman Fawzi Barhoum called the Israeli strikes a “showy reaction” and said Palestinians were “putting pressure on [Israel], forcing it to respect the rights of our people and to walk back its unjust positions.”

Israel’s blockage of aid to Gaza

In yet another move that could spark renewed conflict in Gaza, Israel is withholding crucial aid to the enclosed city.

Palestinian factions in the Gaza Strip have warned Israel against delays in lifting restrictions imposed on the Hamas-ruled coastal enclave and impeding reconstruction after last month’s devastating attacks.

The warning was issued on Tuesday after leaders of various factions in the Gaza Strip met in a Hamas office to discuss the latest developments surrounding a ceasefire reached in May between Israel and Hamas, which ended the 11-day Israeli assault on Gaza.

The factions warned if Israel refuses to comply with their demands, they would resume launching incendiary balloons into Israel and organise rallies at the fence with Israel.

There have also been international calls for Israel to lift the blockade.

“It is essential to ensure that Israel is held accountable for its crimes in the international arena and also to lift the inhumane blockade imposed on Gaza,” Şentop said during a meeting with the Palestine Committee of Jordanian House of Representatives.

Şentop said Israel should take steps to end the occupation in Palestinian territories.

“In this context, we are pleased with the cease-fire in Palestine and hope that it is sustainable,” he said.

One of the most significant sources of tensions between Israel and Palestine has been Israel’s recent acceleration in their construction of illegal settlements in the occupied West Bank, as well as their forced expulsion of Palestinians in several neighborhoods in occupied East Jerusalem.

The rapid rise of Eviatar has triggered a wave of protests by Palestinians at the site 9 km (5.6 mi) south of Nablus, the second-most-populous city in the West Bank.

And though the Israeli government officially regards the “outpost” as illegal, the troops it has deployed to defend Eviatar have killed five protesters in less than a month.

The flare-up prompted the new Israeli government to negotiate the temporary evacuation of the settlers pending a land survey to determine ownership of the land beneath it.

“We have agreed to leave only because it is temporary,” settler Ayelet Schlissel told Efe. “We want to make sure that in the future we can permanently return to this beautiful place that we have built from scratch.”

Under the deal with Prime Minister Naftali Bennett, who supports the settlers but leads a coalition that includes parties opposed to settlements, Israeli troops will move into the prefab homes at the site when the settlers leave.

More than 1,500 Israelis flocked to Eviatar last Saturday, the Jewish Sabbath, to celebrate the creation of the settlement.

Since starting work last month, the settlers have put up 50 buildings to accommodate 53 families, including the Schlissels: Ayelet, her husband and their five children, who abandoned a spacious two-story home in another settlement for a humbler dwelling in Eviatar.

“It’s the right thing,” Ayelet said of the move to Eviatar, though acknowledging the unpleasantness of living with the “attacks” by the Palestinians.

Two of the five protesters killed were teenagers and the United Nations says that 100 Palestinians have been wounded by live rounds fired from the guns of Israeli soldiers.

Palestinians draw comparisons between the situation in Beita with the evictions of Arabs from their homes in the Sheikh Jarrah neighborhood of East Jerusalem, which was occupied by Israel in the 1967 Six-Day War, to make the properties available to Jewish settlers.

In addition to this, Violence erupted after the demolition of a Palestinian business by Israeli forces began in the al-Bustan area of the occupied East Jerusalem neighbourhood of Silwan on Tuesday.

Israeli forces accompanied by bulldozers entered the Palestinian neighbourhood and destroyed a butcher’s shop in Silwan. Soldiers used tear gas and batons to push back residents and Palestinian activists as they carried out the demolition.

If the current culmination of Israeli aggression continues on all fronts, it is not out of the question, that there may soon be a large-scale reaction from militant groups like Hamas, sparking another conflict similar to the one earlier this year. At the moment, there are no signs of de-escalation.