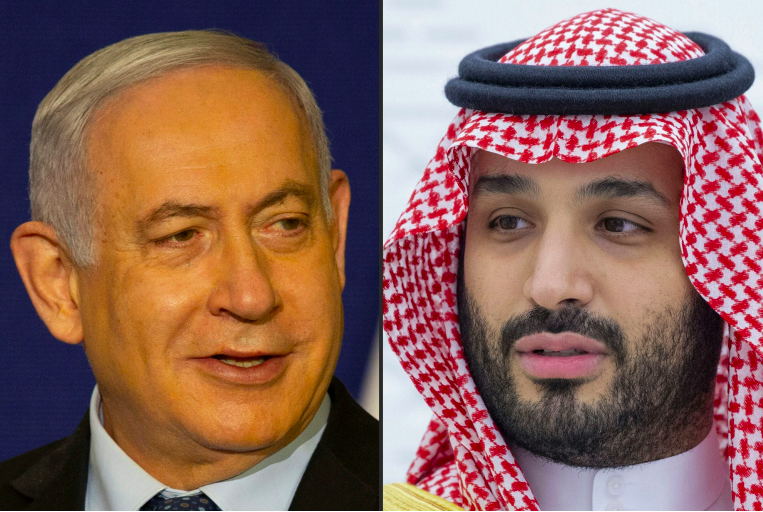 Reported talks between Saudi and Israeli PM and Mossad

In the first visit of its kind, Prime Minister Benjamin Netanyahu travelled to Saudi Arabia on Sunday, where he met with Crown Prince Mohammad bin Salman and US Secretary of State Mike Pompeo, Israeli and Saudi officials said Monday.

Netanyahu was on the ground in Neom, a Red Sea city, for more than three hours for the first known high-level meeting between an Israeli and Saudi leader. He was accompanied by Mossad intelligence chief Yossi Cohen, Hebrew media reports said.

News of the meeting was confirmed early Monday afternoon by Education Minister Yoav Gallant. “I congratulate the prime minister on this amazing achievement,” Gallant said on Army Radio. “The fact that the meeting took place and was made public even if it was in only a semiofficial way is something of great importance.” He said it indicated the growing “warm acceptance of Israel by the Sunni world,” and that this was “something our ancestors dreamed about.”

Pompeo earlier on Monday said he had held a “constructive” meeting with Saudi Arabia’s crown prince the night before, as he wrapped up a seven-nation tour that included stops in Israel and Gulf nations. He made no mention of the presence of the Israeli leader.

“I have seen press reports about a purported meeting between HRH the Crown Prince and Israeli officials during the recent visit by @SecPompeo. No such meeting occurred. The only officials present were American and Saudi,” Prince Faisal bin Farhan Al-Saud wrote on Twitter on Monday.

In recent days, Saudi Arabia has raised its rhetoric against Iran, possibly to convince newly elected US president Joe Biden to continue Trump’s harsh policy against the rival.

Saudi Arabia’s King Salman bin Abdulaziz Al Saud urged the world on Thursday to take “a decisive stance” to address efforts by Iran to develop nuclear and ballistic missile programmes, in his annual address to the top government advisory body.

“The kingdom stresses the dangers of Iran’s regional project, its interference in other countries, it’s fostering of terrorism, it’s fanning the flames of sectarianism and calls for a decisive stance from the international community against Iran that guarantees a drastic handling of its efforts to obtain weapons of mass destruction and develop its ballistic missiles programme,” the king said.

They were the 84-year-old ruler’s first public remarks since he addressed the United Nations General Assembly in September via video link, where he also took aim at Iran condemning its “expansionism“.

The kingdom is at war with Iranian-backed Houthi fighters in Yemen. The conflict has killed thousands and created the world’s worst humanitarian disaster.

During his presidency, Trump blocked a Congressional effort to end US military assistance in Saudi Arabia’s war in Yemen and defended the Saudi crown prince in the face of scathing criticism over the killing of writer Jamal Khashoggi by Saudi agents in late 2018.

Prominent Pakistani journalist Mubasher Lucman believes that Saudi Arabia is one of the countries pressuring Islamabad into recognizing Israel, he said in an interview with i24 News. Lucman’s statement follows Pakistani Prime Minister Imran Khan’s statement that Islamabad has been placed “under pressure” by the United States, and other unnamed countries, to recognize Israel.

Prominent Pakistani journalist Mubasher Lucman believes that Saudi Arabia is one of the countries pressuring Islamabad into recognizing Israel, he said in an interview with i24 News. Lucman’s statement follows Pakistani Prime Minister Imran Khan’s statement that Islamabad has been placed “under pressure” by the United States, and other unnamed countries, to recognize Israel.

However, the transition of the geopolitical has not just added to the complexity, it’s also seemed to have opened opportunities for Pakistan who have been extended an olive branch by the US, requesting Islamabad to recognize Israel in return for Washington’s favour.

The Pakistani premier’s original comments were reported by the Turkish state-run Anadolu Agency and published in Pakistan’s The Express Tribune, stating that the Muslim-dominated country has received numerous appeals from other nations to recognize Israel as a state, without going into much detail about which countries were applying the pressure – besides the usual suspect being the US.

“The pressure is because of Israel’s deep impact in the US. This was in fact extraordinary during Trump’s stint,” he said, according to the report.

Khan noted, however, he has “no second thought to recognize Israel unless there is a just settlement, which satisfies Palestinians,” adding that the stance is motivated by the founder of Pakistan Mohammad Ali Jinnah, who had refused pressure of the like in the past.