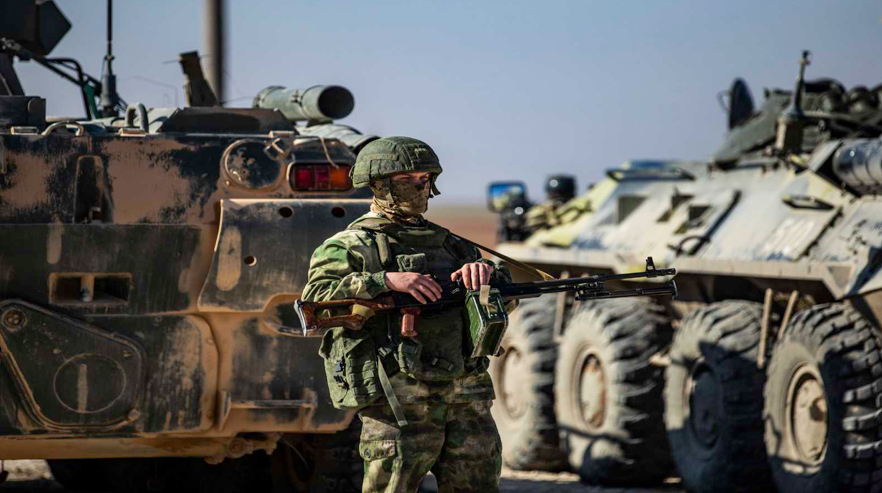 Russia expand presence in East of Syria at Iran’s cost

Iranian forces and their allied militias in Deir ez-Zor province in eastern Syria have recently carried out new redeployment and repositioning operations to limit their losses in the event of Israeli airstrikes against their sites in the area. Their action included moving to new military sites and headquarters, hiding weapons and removing flags from the roofs of military sites and barracks as well as relying more on local members to guard military sites. Some armed formations also partially withdrew from their sites.

The biggest challenge facing the Iranian forces now is to maintain their cohesion in Deir ez-Zor and its countryside, as the violent suspected Israeli bombing that targeted their sites on Jan. 13 has pushed many members to flee their headquarters and military sites.

It seems that Russia will benefit from the presumed weakness that the Iranian forces are experiencing in Deir ez-Zor. The Russian-backed Fifth Corps seems to have become the go-to faction for these defectors. This may be an opportunity for Russia to expand at the expense of the Iranian forces in the strategic Deir ez-Zor province.

The province is particularly important for Russia due to its proximity to the border with Iraq and its vast underground wealth, including oil.

It seems that Russia had already started taking steps to expand its influence in Deir ez-Zor at the end of 2020, i.e., before the Jan. 13 airstrikes against Iranian positions in the province.

Political science researcher Mohammed Adeeb, who lives in the countryside of Aleppo, told Al-Monitor, “The Iranian-Russian competition in Deir ez-Zor is constantly escalating, and it is natural for Russia to take advantage of the state of weakness that Iranian forces are going through in the area after being directly targeted. Russia has also benefited from the alienation and fear of the Iranian forces and their militias among the popular circles there, which are afraid of cooperating with them or allowing their sons to join their ranks, as the popular circles in Deir ez-Zor prefer Russia over the Iranian forces.”

Russia may wish to compete with Iran over some of its influence in Syria for its own interests or for reasons related to the policies of the new US administration. If the Joe Biden administration adopts that same vision, Russia might try to limit the Iranian role in Syria. However, Iran may try to exploit the negotiation process over the nuclear issue to achieve gains in Syria, especially in central and eastern Syria.”

In recent months, Israel has increased its airstrikes against Iranian-linked military targets in its war-torn neighboring country. Furthermore, Israel is likely to continue its air campaign against Iranian forces and allied militias in Syria, particularly in the eastern part of the country, according to some experts.

Israel views Iran’s military presence in Syria as a threat to its national security and has carried out strikes against Iranian targets. However, it rarely acknowledges such operations.

Israel’s military, which rarely comments on individual strikes in Syria blamed on its forces, said Thursday it had hit about 50 targets in the neighbouring country in 2020.

Interestingly, Russia’s Foreign Minister insists that Moscow refuses to allow Syria to be used as an arena for confrontation between Israel and Iran, as tensions continue to escalate in the country with Israeli air strikes on Iranian targets. Speaking at a press conference on Monday, Sergey Lavrov assured Israel that Russia would not allow threats and attacks to be directed towards the occupation state from Syria.

“Our dear Israeli colleagues,” said Lavrov, “if you have facts that your state is facing threats from Syrian territory, report the facts urgently and we will take every measure to neutralise the threat.”

Russia appears to be taking Israel’s side in the dispute, which raises many question marks about the former’s supposed alliance with Iran in Syria.

Moscow and Tehran have increasingly been seen as competitors for long-term interests in terms of their relations with the Assad regime, their economic stakes in the country and their military involvement, and it appears that with the help of Israeli airstrikes, Russia could be winning.

Despite this, Russia-Iran relations remain strong

Nevertheless, Russia is adamant in maintaining its commitment to strong relations with Iran, at least publicly.

Russia said Tuesday it was up to Washington to take the first steps if US President Joe Biden wants to salvage the landmark Iran nuclear deal.

Foreign Minister Sergei Lavrov urged Washington to lift sanctions on Tehran and save the historic agreement during his first talks with his Iranian counterpart since Biden’s election victory raised hopes for the fate of the deal.

Lavrov said that Russia and Iran “share the same position” on the preservation of the 2015 accord, urging the United States to lift sanctions as a condition for Iran’s return to compliance

“This in turn will provide the preconditions for the implementation of all requirements of the nuclear deal by the Islamic Republic of Iran,” he told journalists.

The talks in Moscow came days after Iranian Foreign Minister Mohammad Javad Zarif urged the United States to make the “fundamental choice” to end its sanctions regime and reverse the “failed policies” of the previous White House administration, which took a hawkish position on Tehran.

In addition to this, Iran has approved Russia’s Sputnik V vaccine and plans to both import it and produce it, giving the Middle East’s worst-hit country a tool to fight the spread of COVID-19, Foreign Minister Mohammad Javad Zarif has said.

“The Sputnik V vaccine was yesterday also registered and approved by our health authorities,” Zarif said at a meeting with his Russian counterpart, Sergey Lavrov, in Moscow on Tuesday.

However, should Russia’s aggressive policy towards Iran in Syria become more direct and official, relations could certainly deteriorate.