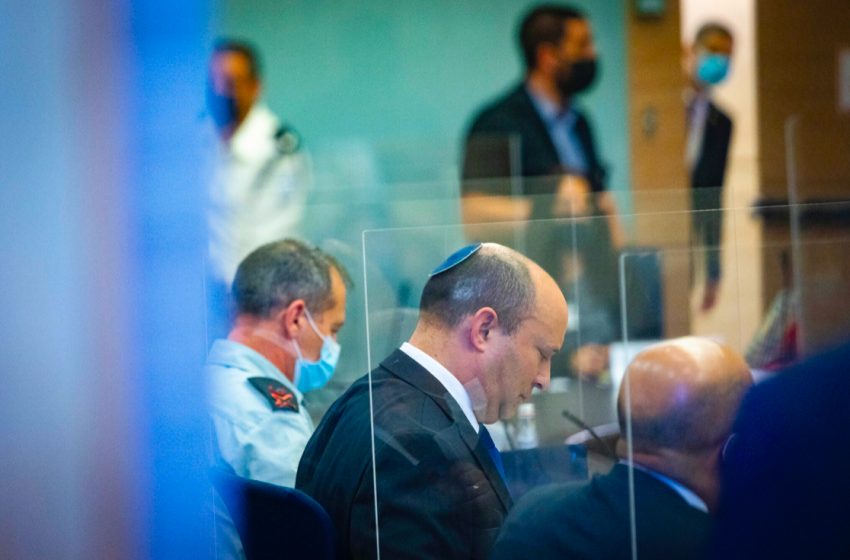 Israel has reportedly signed an agreement to indirectly pump natural gas to Lebanon to aid the crisis-hit nation, an unsourced television report claimed on Saturday.

Channel 12 news reported that the deal was brokered by Amos Hochstein, Washington’s special envoy and coordinator for international energy affairs, and signed in secret over the weekend.

It would see Israel transfer gas from the offshore Leviathan field to Jordan, the report said. From there it will be transferred to Syria and on to Lebanon.

However, the network said, the move will require repairing and extending a gas line that flows from Syria to Lebanon, which could take several years.

The report stated that the agreement was approved by the United States and was also coordinated with Russian President Vladimir Putin.

It said the deal was partly designed to provide Lebanon with an alternative to Iran as it seeks to recover from a deepening economic crisis.

Lebanon, which officially regards Israel as an enemy state, reached an agreement last year on bringing Jordanian electricity and Egyptian gas into the country via war-torn Syria, while the Shi’ite terrorist group Hezbollah is delivering fuel from its Iranian paymasters.

However, the country is still grappling with round-the-clock power cuts that last at least 20 hours a day due to a financial crisis that has hampered key imports, including fuel for power stations.

The country of six million is experiencing its worst-ever financial crisis, with a currency that has lost around 90 percent of its value, people’s savings trapped in banks, and qualified labor emigrating in droves.

Severe shortages in fuel have resulted in crippling power cuts and hours-long waits at gas stations.

Internet services were disrupted in Lebanon Sunday because of diesel shortages, according to the state provider, adding another essential service to the list of casualties of the country’s snowballing economic crisis.
Imad Kreidieh, the head of state Internet provider Ogero, tweeted that starting early Sunday a major station in west Beirut, Al-Mazraa, would run out of diesel and go offline. The outage affected over 26,000 subscribers, including the country’s General Security operation rooms, he told Al-Jadeed TV.

Despite the detailed reports of the deal, the US State Department’s Bureau of Near Eastern Affairs has denied a claim there was a secret deal that would see Israel supply gas to Lebanon. “Media reports that the United States has brokered an energy deal between Israel and Lebanon are false,” it said on its official Twitter account.

This leaves many questions because the media had not reported that the US had brokered a deal between Israel and Lebanon; reports had merely indicated that Israel could supply gas to Jordan and that gas would find its way onward, perhaps to Syria or Lebanon in some complex arrangement.

The Lebanese government has also denied media reports about an agreement to be supplied with gas from Israel.

the Lebanese Ministry of Energy and Water described the Israeli media report in a statement as “totally and completely untrue.”

“The gas supply agreement that is being worked on between the Lebanese government and the sisterly Egyptian government clearly and explicitly stipulates that the gas should come from Egypt,” the ministry said.

The ministry said the deal to supply Egyptian gas to Lebanon is part of a US-led initiative to help alleviate chronic electricity shortages in the country.

“A second element of the US-led initiative entails supplying the Lebanese power grid with electricity imported from Jordan, also via Syria,” it added.

This however fails to eliminate the previous report, as it appeared as if the Israel-Lebanon gas deal was to be negotiated mainly between Israel and Lebanon, and not Egypt. Nevertheless, there is no concrete evidence for the gas deal, apart from speculation and the Lebanese increasing intent to shift away from Iran.

Does Israel see an opportunity in Lebanon?

Hezbollah’s leader, Hassan Nasrallah, announced in August that Iran was sending fuel to Lebanon to help ease the crisis. The first Hezbollah-commissioned Iranian oil tanker arrived in the Syrian port of Baniyas in September and the diesel was unloaded to Syrian storage places before it was brought overland to Lebanon by tanker trucks, where it was welcomed with celebratory gunfire.

Hezbollah, often accused of operating a state-within-a-state, has been taking part in Syria’s civil war alongside government forces. It manages its own crossing points along the Lebanon-Syria border, away from formal border crossings.

Lebanese Prime Minister Najib Mikati has said the shipments violate Lebanon’s sovereignty and are not approved by his government. There have been increasingly strong voices in Lebanon and the Lebanese government calling for a reduction in dependence on Hezbollah and Iran to salvage Lebanon’s failing economy.

The head of Lebanon’s largest Christian party said on Sunday that a 15-year-old alliance with the country’s powerful Shiite group Hezbollah was no longer working and must evolve.

The televised speech by Gebran Bassil, who heads the Free Patriotic Movement, signaled an unprecedented level of frustration with Hezbollah and suggested the 2006 alliance credited with helping maintain peace in the small country was in jeopardy.

Bassil’s comments come amid a devastating economic crisis and also ahead of critical parliamentary elections in which his party is expecting tough competition. Undoing the alliance with Hezbollah would cost him more votes in the May elections.

But Bassil, a former foreign minister, said the alliance is costing him credibility with supporters. Bassil is also the son-in-law of Lebanon’s President Michel Aoun. He has positioned himself as a reformer and is believed to have ambitions to run for president himself.

Bassil pinned his frustration on Hezbollah’s other ally, the powerful Shiite Amal Movement, led by Parliament Speaker Nabih Berri. He said in recent months that Hezbollah has backed Berri’s Amal at the expense of their own alliance.

“We reached an understanding with Hezbollah (in 2006) not with Amal,” Bassil said in an hour-long speech. “When we discover that the one making decisions in (this alliance) is Amal, it is our right to reconsider.”

Hezbollah and its allies control most seats in parliament and are the main backers of the government that took office in September. But the government and parliament have been paralyzed as political disagreements deepened and as Lebanon faces an unprecedented economic crisis unraveling since 2019.

Berri is an old-time rival of Bassil, who accused him of using his power in parliament to block several of his draft bills.

Iran had suggested it could save Lebanon by putting energy and gas into the hands of Hezbollah, thus making Hezbollah now the all-powerful energy provider for the Lebanese. As such the US seems to be bidding for influence. But it’s not entirely clear if an alternative source of energy for Lebanon outside of the direct control of Hezbollah and Iran doesn’t also benefit Hezbollah and Iran, as Hezbollah would be necessary to negotiate such a gas deal, at least for now.

Either way, Hezbollah and Iran maintain a strong foothold in Lebanon, and it is unlikely to fade significantly in the coming years. However, there are some increasing rifts between Hezbollah and its coalition partners and other political factions in Lebanon, and Israel is watching the situation attentively, willing to take advantage of a situation that could weaken the former and its hold on Lebanese politics.