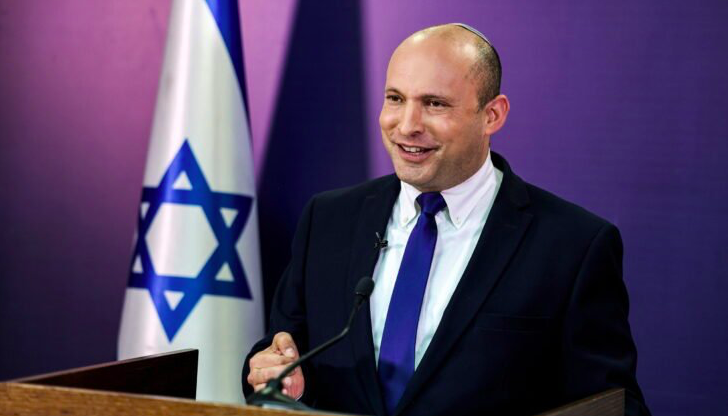 His governing coalition is comprised of eight parties representing a wide spectrum of political positions, from Jewish ultranationalists to liberal factions and a small Islamist party.

The ejection of Israel’s longest-serving prime minister was made possible by a band of unlikely allies from across the political spectrum, brought together by the shared belief that Netanyahu had to go. The new coalition government is made up of eight parties, all of whom have agreed to hold off on major decisions surrounding controversial issues, like the future of the occupied West Bank.

The Palestinian Authority Foreign Ministry in Ramallah said it expected to see “no difference, or perhaps even worse” policies under the new Israeli government. In Gaza, Hamas said Israel continues to be “a settler occupier entity that must be resisted by all forms of resistance, foremost of which is the armed resistance.”

Netanyahu, 71, was first elected prime minister in the late 1990s and then again in 2009. Over the last 12 years, he has used his time in office to allow the growth of Israeli settlements in the occupied West Bank, frustrated Palestinian aspirations for statehood and aligned Israel with right-wing leaders internationally.

Among his loyal supporters — he’s seen as a strong defender of Israel who made the country an economic success and oversaw an effective battle against the coronavirus. But the former prime minister also faces corruption charges including bribery, fraud and breach of trust — allegations Netanyahu denies. A trial is already underway.

Over the last two years, Netanyahu’s support waned and he struggled to stay in power by prompting repeated elections, leading to inconclusive votes.

But earlier this month, Netanyahu’s opposition came to a complicated agreement to form a majority. Yair Lapid, former finance minister and head of the centrist Yesh Atid party, led the charge against Netanyahu and joined with the right-wing Bennett.

Bennett is Netanyahu’s former chief of staff. Under the coalition agreement, he will serve for two years before passing the torch to Lapid for the latter half of the 4-year term. Despite Lapid’s party holding more than double the seats in the Knesset, he agreed to let Bennett take the first term to maintain political solidarity. Together they helped bring together a diverse government body, including a party representing Arab citizens for the first time in the nation’s history.

In an interesting first move by Bennett, Israel has signified that it is willing to work towards establishing ties with Southeast Asia’s Muslim majority nations, its ambassador to Singapore said yesterday.

The announcement comes despite their condemnation of Israel’s air strikes on the besieged Gaza Strip last month.

For 11 days, Israel launched attacks on the blockaded Gaza Strip. Health officials in Gaza say 254 Palestinians, including 66 children and 39 women, were killed and more than 1,900 wounded in the bombardments.

Muslim-majority nations such as Indonesia, Malaysia and Brunei had urged the United Nations to step in and stop “the atrocities carried out against the Palestinian people.”

In a statement last month, Indonesian President Joko Widodo, Malaysia’s Prime Minister Muhyiddin Yassin and the Sultan of Brunei termed Israel’s air strikes on Gaza part of an “inhumane, colonial and apartheid” policy toward the people of Palestine.

“We condemn in the strongest term the repeated blatant violations and aggressions, carried out by the Israelis, targeting civilians throughout the Occupied Palestinian Territory, particularly in East Jerusalem and the Gaza Strip, which has killed, injured and caused suffering to many, including women and children,” the statement added.

The three countries do not have diplomatic relations with Israel, and have repeatedly called for an end to its illegal occupation of Palestinian territories and for a two-state solution based on the 1967 borders.

Israel’s Ambassador to Singapore, Sagi Karni, said, Israel needs to protect its citizens, but that it has “no quarrel” with any countries in Southeast Asia.

“We would like to expand the circle of peace also, to the Muslim countries here in the region,” he said.

“But we cannot force it upon them,” he added. “It’s up to them to join, and they know that we’re interested, but they also have their own internal political considerations.”

Last year’s normalisation deals signed by the UAE and Bahrain, followed by Sudan and Morocco, were denounced by the Palestinians who claimed the states had abandoned a unified position under which Arab countries would make peace only under a two-state solution, negotiations for which have been deadlocked for years.

Following the Israeli ambassador to Singapore’s remark that Israel is interested in establishing ties with Muslim nations in Southeast Asia, a top Indonesian diplomat stated that his country will not consider doing so until the Palestinian issue is settled.

Abdul Kadir Jailani, the Indonesian Foreign Ministry’s Director General of Asia Pacific and Africa, said that peace is “Indonesia’s main focus at this time, and we hope for the revival of the peace process,” Turkish media outlet Anadolou Agency reported.

He did express some optimism that relations would be possible once an Israeli-Palestinian agreement is reached, but pledged that Indonesia would continue to support the Palestinians in international forums.

However, Jailani said that he expects the peace process to be stymied due to the views of newly-installed Israeli Prime Minister Naftali Bennett.

“As we know, the political direction of the new Israeli government is quite tough, especially regarding the idea of a two-state solution and the construction of illegal settlements,” Jailani said.

The comments came after Israeli ambassador to Singapore Sagi Karni indicated that Israel would be open to a rapprochement with Southeast Asia’s three Muslim-majority states — Indonesia, Malaysia and Brunei.

Israel clearly wants to expand its sphere of influence in the Muslim world, and reduce international opposition to its actions in the occupied West Bank and Gaza.

Israel’s attempts to do so are futile for now.