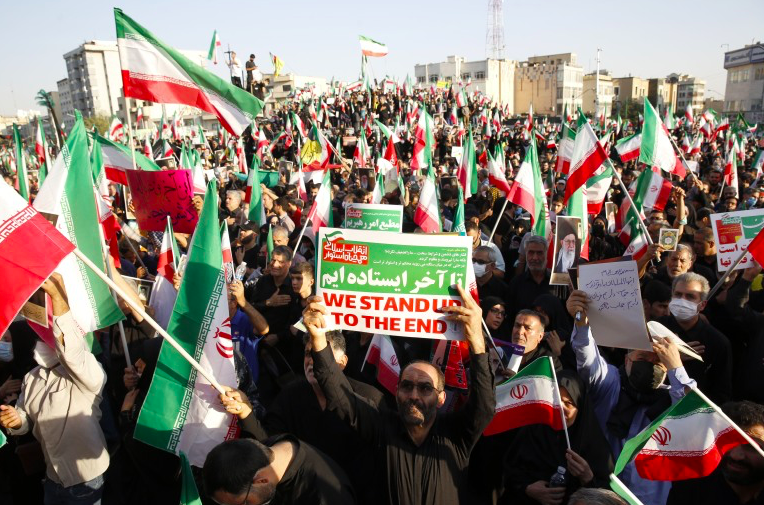 Authorities in a northern Iran province have arrested 450 people during more than 10 days of protests following a young woman’s death in morality police’s custody, state media has reported.

“During the troubles of the past days, 450 rioters have been arrested in Mazandaran,” the northern province’s chief prosecutor, Mohammad Karimi, was quoted as saying by official news agency IRNA on Monday.

They “have attacked government buildings and damaged public property in several parts of Mazandaran”, he added.

Local media reported that protesters were shouting anti-regime slogans, and Karimi said they were led by “foreign anti-revolutionary agents”.

More than 1,200 demonstrators, reformist activists and journalists have been arrested during the mostly night-time demonstrations across the country since unrest first broke out after Mahsa Amini’s death was announced on September 16.

Amini, whose Kurdish first name was Jhina, was detained three days before that in Tehran for allegedly breaching rules mandating hijab headscarves and modest dress.

On Saturday, authorities in the neighbouring Gilan province announced the arrest of 739 people, including 60 women.

The Fars news agency on Sunday reported the arrest of 88 protesters in the southern province of Hormozgan, quoting a local official.

Fars also reported arrests in Zanjan, a city in the northwest, Karaj, west of Tehran, and in Kerman in the southeast.

At least 41 people have died since the unrest began, mostly protesters but including members of the Iran’s security forces, according to an official toll.

While authorities say Mahsa Amini died from underlying health reasons, her family and countless other Iranians believe she died as a result of having been beaten.

Protesters say that if they don’t act now, they could fall victim to the same fate.

In addition to demonstrations at several universities in the capital, there were protests in downtown Tehran on Monday and Tuesday, which were dispersed by security forces and tear gas, according to state media and videos widely circulated on social media.

An Iranian governor has confirmed the first fatalities during protests over the death in police custody of a young woman named Mahsa Amini – but the governor has said the three individuals were killed by anti-establishment elements.

“Investigations have shown that these people were shot and killed by those working against the establishment and with firearms that are not employed by any tiers of security or law enforcement forces in the province,” he said.

According to the governor, one person died in Divandareh, another was left in a car near a hospital in Saqqez, and a third “suspicious” death is being investigated.

Families must be careful because “anti-revolutionary” groups wish to use Mahsa Amini’s name as a code [rallying call] to advance their own goals, Zarei Kousha said, in a likely reference to a phrase that has been mentioned many times after being written on Amini’s grave: “You won’t die, your name will become a code”.

In an act that could further escalate the protests, SpaceX CEO Elon Musk said on Friday that he would activate the firm’s satellite internet service, Starlink, in response to U.S. Secretary of State Antony Blinken’s tweet that the United States took action “to advance internet freedom and the free flow of information” to Iranians.

A Treasury official briefing reporters said: “Our understanding of Starlink is that what they provide would be commercial grade, and it would be hardware that’s not covered in the general license; so that would be something they would need to write into Treasury for.”

A U.S. State Department spokesperson later said of Friday’s updated license that it was self-executing and that “anyone who meets the criteria outlined in this general license can proceed with their activities without requesting additional permissions.”

Could Iran be heading towards another revolution?

Iran has responded to protests with the usual force, attempting to suppress the protests with police, and staging counter-protests. Iran’s military Friday warned anti-government protesters against continued unrest, vowing to confront “plots” by enemy forces as demonstrators, angry over the recent death of a woman in police custody, clashed with security forces across the country.

“These desperate actions are part of the evil strategy of the enemy to weaken the Islamic regime,” the army said Friday, Reuters reported. It went on to say that the military would “confront the enemies’ various plots in order to ensure security and peace for the people who are being unjustly assaulted.”

Demonstrators at several state-organized rallies on Friday called for perpetrators of alleged violence against security forces to be executed. Iranian state television reported Friday that 35 protesters and policemen had been killed since the demonstrations began a week ago, the Associated Press reported.

As protests spread, Amini became a symbol for many Iranians grappling with poverty, unemployment, political repression, and everyday indignities.

Prominent Iranian sociologist Mohammad Fazeli says Iranians who have nothing to lose have united in the ongoing nationwide protests, demanding fundamental change.

Fazeli who was fired from the Tehran University earlier this year for expressing his views, said in an interview with reformist website Etemad Online that “The protests are led by a mechanism that has originated in Iran.”

He pointed out that the Iranian people no longer live like the older generations thanks to the Internet. He added that the Iranian society has experienced a growth during the past 43 years and can no longer accept the values and standards introduced many years ago.

Trying to make sense of the protests that followed the death in custody of Mahsa Amini, a young woman, Iranian scholars and academics have been discussing the underlying reasons of the protests. Many of them say that the protests are not simply the outcome of recent events, but they are the product of more than 40 years of bad governance in Iran.

Fazeli said that there are many unresolved problems that have been accumulating during the past four decades, without any attempt by the government to address them. He said, “When President Raisi says he will probe into Mahsa Amini’s death, the people cannot trust him because similar cases in the past remained unresolved.”

Meanwhile, the absence of a prospect for the future after several decades of high inflation, near-zero economic growth, the decline of the administrative system and many other factors have left no hope in the future for the new generation. This has led to the emigration of educated individuals and flight of capital,” Fazeli added.

Meanwhile, in a commentary in Arman Melli newspaper, reformist academic Sadeq Zibakalam wrote that both supporters and critics of the Iranian government are currently worried about the country’s situation. The Iranian government has not changed its approach toward protests, and it has not sought the insight of moderate politicians. It refuses to accept that part of the society does not agree with the lifestyle hardliners want to impose. Zibakalam maintained: “Ignoring this dissatisfaction in the Iranian society will not solve the government’s problems.”

Despite this, there are some obstacles to the protests’ potential to continue. News of Starlink’s “activation” has circulated wide and far among Iranians, many of whom have pinned their hopes on the service. But so far, the only tangible result has been hackers who published malware under the guise of software required to connect to Starlink in order to dupe users. Starlink could potentially face legal and regulatory ramifications if it were to meaningfully advance its plans without the cooperation of the Iranian government. Iran has had a history of legally pursuing grievances with Western powers, namely concerning the US and its wide-reaching sanctions.

With the internet remaining restricted, it will be hard for Iranians to communicate larger gatherings, and smaller disorganized groups of protests will be easier targets for police and arrests.

Nevertheless, should the protests become widespread enough, as is being increasingly seen, blocking the internet may not be enough to stop the widespread unrest, and should it be organized and structured, signs of a revolution could appear. At this moment however, this remains unlikely.