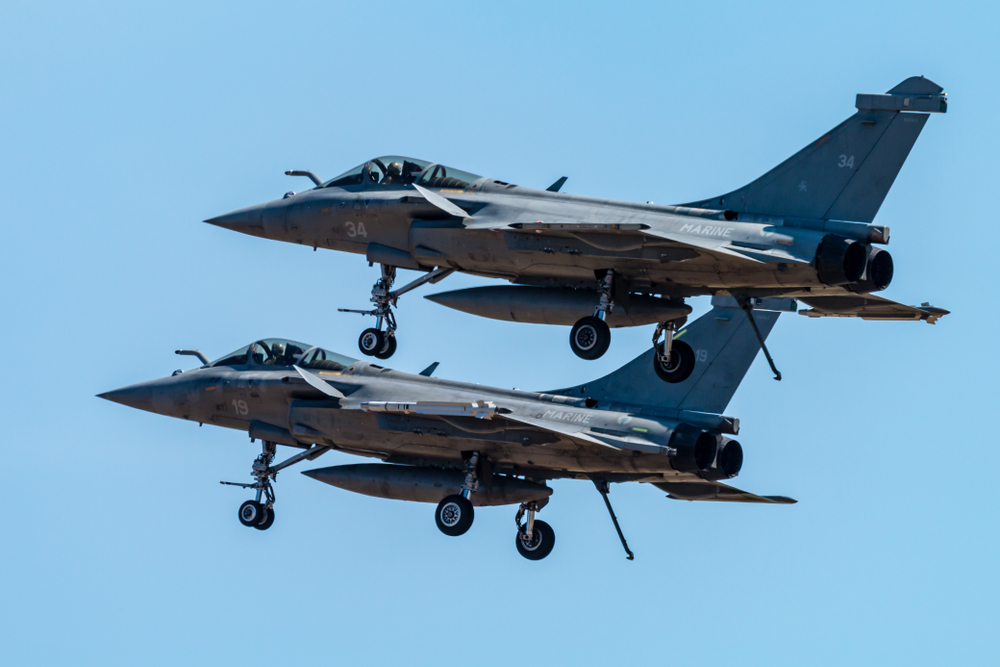 France has recently shown a sign of warming relations with India, as the first batch of five French-made Rafale fighter jets has arrived at an Indian Air Force (IAF) base, Indian officials said, as the country seeks to modernise its military amid security challenges with Pakistan and China.

After flying for around 7,000 km, the beasts, Rafale have landed at the Ambala Air Force Base. At Ambala, they are received by the Air Chief Marshal RKS Bhadauria. Five French-made fighter jets, which have been considered as game-changer for Indian Air Force will be inducted in the No. 17 Squadron, ‘Golden Arrows’. These fighter jets took off from Merignac airbase in the French port city of Bordeaux and covered around thousands of miles before arriving at the Ambala Air Force Base. Meanwhile, the Ambala Cantt area has been declared as a ‘no-drone area’ as it is a sensitive zone.

“The birds have landed safely in Ambala,” India’s Defence Minister Rajnath Singh tweeted. “If anyone should be worried about or critical about this new capability, it should be those who want to threaten our territorial integrity.” This appears to be a statement directed towards China after the recent border tensions.

The aircraft are part of India’s deal with France in 2016 to buy 36 warplanes. Delhi is hoping to modernise its dwindling Soviet-era air force fleet with the induction of Rafale multi-role jets. But experts warn that these aircraft cannot be used right away in case of a conflict. Air Marshal (retd) Pranab Kumar Barbora, who oversaw the induction of the Jaguar aircraft fleet, told the BBC that the arrival of the Rafale was a welcome move because “it will significantly enhance the air force’s capability”. “But it will take a while before these aircraft are fully operational. You have to set up a logistics chain, train technical and ground staff in India,” he said.

The multibillion-dollar deal has been shadowed by corruption allegations levelled by the opposition Congress party, though Prime Minister Narendra Modi has rejected the claims. India has become the world’s biggest arms importer as it modernises its military. India’s defence ministry on July 2 approved the purchase of 21 Russian MiG-29 and 12 Sukhoi Su-30MKI fighter aircraft costing $2.43bn to replace obsolete Soviet-era weapons. It is clear that India needs foreign interaction and arms in order to stand a chance against China, as its domestic production is not close to being as developed as China’s.

The delivery of the remaining Rafale aircraft is expected to be completed by next year. The Rafale is a multi-role aircraft, capable of carrying out long-range missions, including highly accurate sea and ground attacks. Analysts say the arrival of the jets will boost the morale of the air force, which has been facing a shortage of fighter aircraft.

India and France have been increasing their coopertion on all fronts for a while now. In September last year, Indian Prime Minister Narendra Modi traveled to France for the annual bilateral summit which lasted from August 22-23.  He was also invited by the French President Emmanuel Macron to the G-7 summit, which occurred from August 25- 26 at Biarritz, a reflection of the growing depth of the partnership between India and France.

The consolidation of this strategic partnership could not have come at a better time for New Delhi, as India had just taken a major political gamble by removing the special status of the Indian state of Jammu and Kashmir, a state that is the focus of a long dispute between India and Pakistan. Furthermore, India is currently facing a border dispute with China, which will be further discussed in the next section.

Despite India’s traditional discomfort with being an ally, Modi during his speech at UNESCO in Paris last year said, “Today in the 21st century, we talk of INFRA. I would like to say that for me it is IN+FRA, which means the alliance between India and France.” Whether this play of words was important or not, India’s strategic engagements with France has grown dramatically. Backing India within the UN Security Council was the ultimate demonstration of France’s firm resolve to stand with India. Among the UN Security Council members, France has remained one of the steadiest partners of India in recent decades, a place that used to be reserved for the Soviet Union/ Russia in the past. France and India already have a fairly multifaceted relationship spanning multiple domains from defense, civil nuclear, and space, to climate change, clean energy, and urbanization. During Macron’s visit to India last year, the two countries signed 14 agreements covering these areas.

The French envoy to India Emmanuel Lenain, speaking ahead of the arrival of Rafale fighter jets has said it shows “strong partnership between our two countries.”  Speaking to the Principal Diplomatic Correspondent of WION, Sidhant Sibal, at Delhi’s Palam airport where the French military planes landed with COVID-19 medical aid, envoy Lenain said, “India is a world leader in the production of the vaccine” and “it is going to be like this for COVID-19.”

France is looking for a powerful and stable partner in Asia for it to ensure the stability of its geopolitical and economic interests, including investments, trade routes in the Indian Ocean, and military cooperation, and India is just that in their eyes.

France useful for India in their geopolitical stand-off with China

India also has a lot to gain from its multi-faceted partnership with France. On June 15, tensions between India and China shot up as the two countries traded blame for triggering the high-altitude brawl in the Galwan Valley on June 15, in which 20 Indian soldiers were killed and at least 76 were injured. The June border clash saw soldiers engaged in brutal hand-to-hand fighting with clubs and staves about 4,270 metres (14,000 feet) above sea level amid sub-zero temperatures. It was the worst border skirmish in nearly 50 years. China has not disclosed how many casualties its troops suffered.

The border has been a source of historical dispute between the 2 nations, as the Sino-India war of 1962 resulted in China redrawing the border as the Line of Actual Control in its own favour, while the second Sino-India war of 1967 saw India push China back, further obfuscating the location of the Himalayan border. Bloodless clashes have erupted since then with both sides quick to de-escalate friction to avert another war. In 1996 both sides agreed not to use firearms in the area. Tensions rose again in 2017 when Beijing began building a road into Bhutan, an area New Delhi considers a buffer zone. In a tense stand-off, Indian and Chinese troops threw rocks at each other as a precursor to the current situation.

India has recently been enforcing its defence and military strength, which has been recently accelerated by the geopolitical tensions with China. India on Thursday approved the purchase of 33 Russian fighter jets and upgrades to 59 warplanes at a cost of ₹18,148 crores amid rising tensions with China and about two weeks after the deadliest border clash in more than four decades between the two Asian nations. MiG-29 and 12 Sukhoi Su-30MKI fighter aircraft were purchased costing $2.43bn to augment its air force. The latest purchase from France is therefore just the latest of a recent push by India to improve its military capabilities.

France, of course, also remains a vital source of arms supply to India.  The French Rafale fighter won India’s Medium Multi-role Combat Aircraft (MMRCA) competition. Though India bought only about three dozen Rafale’s instead of the 126 originally envisaged, there are continuing rumors that India will buy additional ones. India is also a customer for the Scorpene submarines and a host of other items.

Clearly, the roiling of India’s strategic partnerships has increased France’s importance to New Delhi. France is likely to remain important to New Delhi for some time to come, especially with this increasing aggressiveness and expansive attitude of China.