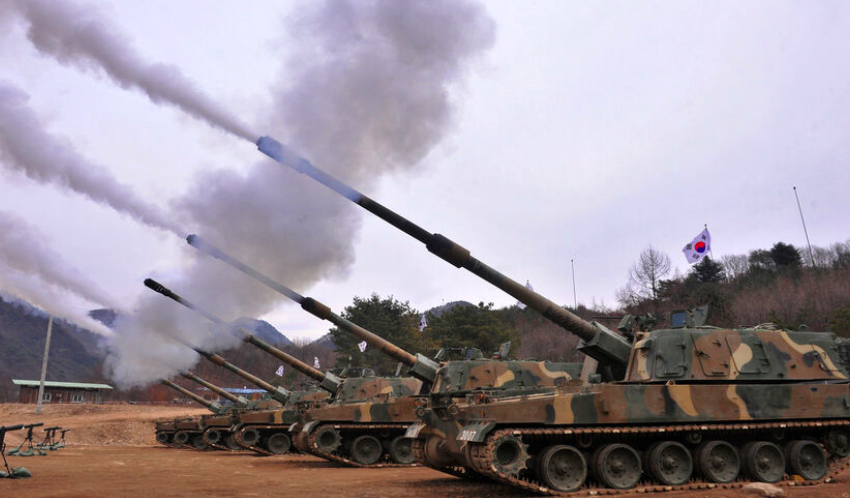 Egypt and South Korea announced in early February a $1.66 billion deal to sell K9 self-propelled howitzers to the Egyptian armed forces and to locally manufacture them in the Egyptian military factories.

According to a Feb. 1 statement by the Egyptian armed forces, Egyptian Minister of Defense Mohamed Zaki attended the signing ceremony of two military cooperation memoranda of understanding between Egypt and South Korea during his visit to Seoul, in the presence of South Korean Minister of Defense Acquisition Kang Eun-ho. Another contract was also inked with Hanwha Defense to jointly manufacture the K9A1 EGY self-propelled howitzer.

The statement continued that the first memorandum is centered on defense industry and logistical support, while the second is related to the principles governing defense cooperation in research and development, without providing any further details.

South Korea’s presidency said in a statement Feb. 2 that the deal signed with Egypt is worth $1.66 billion, and added that it marks the largest ever deal for the export of K9s and serves as an opportunity to recognize the uniqueness of South Korea’s arms system.

During the signing ceremony, Zaki stressed the Egyptian army’s keenness to “keep pace with the development of the arms industry so that the military preserves its prominent position among the top world armies, in terms of military strength, trained human capabilities and advanced arms, to continue to assume its historical duties and mission in preserving the homeland’s security and capabilities.”

The deal came in the wake of South Korean President Moon Jae-in’s visit to Cairo Jan. 20, where he met with Egyptian President Abdel Fattah al-Sisi. According to the Egyptian presidency, the two officials discussed “ways to boost military and security cooperation, especially the joint manufacturing and the transfer and localization of technology, in light of Egypt’s pivotal role in the region and its duty to achieving stability, security and combatting terrorism, and given South Korea’s advanced technology and military industry.”

Speaking at a press conference in Cairo following his meeting with Sisi, Moon said that his visit to Egypt “is of major importance, given that it is the first visit by a [South] Korean president to Egypt in 16 years.”

Jeff Sung, spokesman for Hanwha Defense, told Akhbar Al-Youm Dec. 1 that the K9 self-propelled howitzer is one of the most advanced self-propelled artillery systems in the world, has a major fire power and long shooting range, in addition to quick displacement and excellent maneuverability, and it can be set to fire at the enemy after one minute only.

Experts say that Egypt is diversifying its arms sources regularly. Previously, it concluded arms deals with the United States and Russia with the aim to boost Egyptian military capabilities.

South Korea’s Hanwha firm said in a statement in early February that the deal with the Egyptian army allows the self-propelled artillery system to have a presence in Africa for the first time, and makes Egypt the 9th country to have it.

The K9 accounts for nearly 50 percent of the global self-propelled howitzer market, as it is in service with seven countries: South Korea, Turkey, Poland, India, Finland, Norway and Estonia. Australia recently signed a deal for the K9 under its Project LAND 8116 Phase 1.

The tracked artillery system meets NATO standards and can be deployed in a large range of environments, including snowy terrain and deserts.

Equipped with a 360-degree rotating turret, the 47-ton weapon has a firing range of 40 kilometers and moves as fast as 67 kph. Fitted with an automatic fire control system, the howitzer can fire within 30 seconds from a stationary position and within 60 seconds while on the move, with a burst rate of fire from six to eight rounds per minute.

Egypt’s land forces currently operate versions A2, A3 and A5 of the American-made M109 howitzer.

Diversification from US aid

Egypt has accelerated the diversification of its military structure in recent years, and especially after the ascension of the Biden administration, which has stepped back its relations with Sisi’s Egypt.

The Biden administration has resolved to cut $130 million in annual military financial assistance from the United States to Egypt over human rights concerns, following consecutive years of providing Egypt the same amount of military financing.

Sen. Christopher Murphy, D-Conn., a member of the Senate Appropriations Committee, said in a statement on Friday that the aid cut “sends the important message abroad that we will back up our commitment to human rights with action, and gone are the days where dictators receive blank checks from America.”

US Secretary of State Antony Blinken in September approved military assistance to Egypt of $300 million but said that the US would withhold $130 million of it unless Egypt addressed a list of human rights issues.

However, the American government believes that these actions are not enough and it will divert the $130 million in aid to other international programs.

An official with nongovernmental organization Human Rights Watch told The Media Line, “Egypt is currently in one of the worst periods for human rights in its modern history.”

This includes holding tens of thousands of political prisoners in prisons, ordering arbitrary detentions and forced disappearances, the wide-spread and systematic use of torture, and the crushing of civil society.

However, the full list of demands from the US, upon which the release of the aid was conditioned and which the Egyptian government was required to fulfill before January 30, has not been publicly released.

Egypt has recently correlatively expanded its defense cooperation with France, after it had already established a basis for enhancement in previous years. Between 2016-2020, French arms exports increased by 44 percent compared to 2011-2015, with Egypt receiving 20 percent of French arms exports – making it the second largest customer for French arms after India. The costliest purchases so far have been French Rafale jets, purchased in two major arms deals in 2015 and 2021, worth 5.2 billion EUR and 4.5 billion EUR respectively. The structure of these arms deals is also worth noting: some of the largest arms transfers are financed through French loans, including a 3.2 billion EUR loan in 2015 as well as an undisclosed loan to finance the latest 4.5 billion EUR deal in 2021. The regressive nature of the Egyptian tax system, where the tax burden is shouldered by the lower and middle classes, means that this arrangement is effectively transferring wealth from the lower and middle classes to the French arms industry.

In addition to facilitating capital flows and wealth transfer to France, France and Egypt have similar foreign policy objectives, most notably in Libya. Both parties have provided support to the Libyan general, and now presidential candidate, Khalifa Haftar in his effort to wrest power from the Government of National Accord (GNA) in Tripoli, which was at the time the internationally recognized government in Tripoli (between 2019-2020). The US’s lack of involvement in Libya has been an example of foreign policy divergence between itself and Egypt, as the US already under the Trump administration stepped back involvement from military conflicts in the Middle East. This is also a factor to be considered in the Egyptian incentive to diversify its military and reduce reliance on the US.

US still in the picture

Nevertheless, the US remains Egypt’s prime military partner and will continue to maintain that position in the next years. Egypt’s diversification will not happen overnight. The arms deal with South Korea came a few days after the United States approved Jan. 26 a $2.56 billion arms deal to sell Egypt 12 C-130J Super Hercules aircraft, air defense radar systems and other equipment.

The US Defense Security Cooperation Agency said the sale, still not finalized, “will improve Egypt’s capability to meet current and future threats by providing airlift support for its forces by moving supplies, equipment, and people.”

The aircraft can also be used for maritime patrol and rescue missions, it added. In a second deal, Egypt can buy ground-based air defense systems worth $355 million to help it fend off air threats.

For fiscal year 2022, which began on October 1, 2021, the Biden administration budgeted $1.4 billion in bilateral assistance — most of it military related — for Cairo, the same as the previous year.

Two lawmakers who have been critical of US arms sales to Egypt said Tuesday that Egypt has not met the conditions required to remove the suspension on the frozen $130 million.

However, they said it was not enough and urged Biden to keep the freeze on the aid.

“Tens of thousands of political prisoners… remain in Egyptian prisons,” they said in a statement.

“The government of Egypt has continued to engage in widespread torture, suppression of dissent, and even persecution of American citizens and the families of critics living in the United States,” they added.