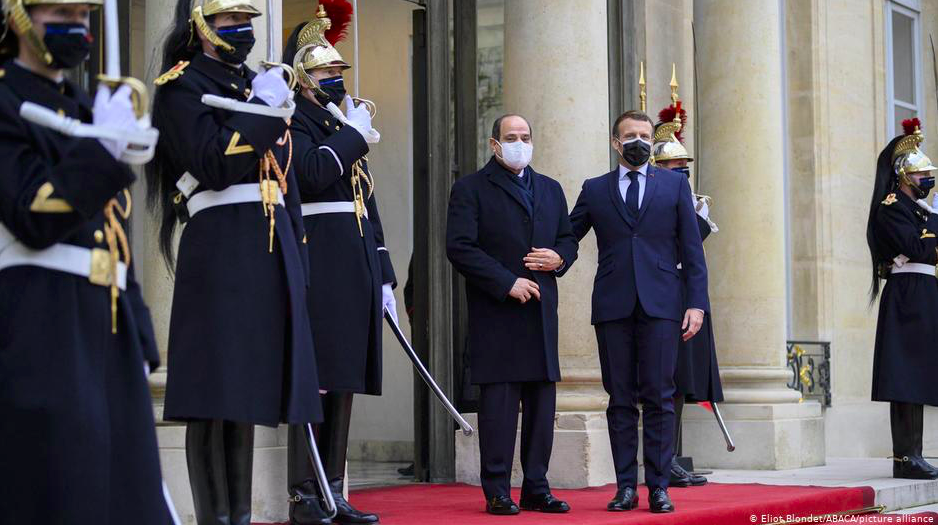 President Emmanuel Macron said on Monday he would not condition the future sale of French arms to Egypt on human rights because he did not want to weaken Cairo’s ability to counter terrorism in the region.
“I will not condition matters of defence and economic cooperation on these disagreements (over human rights),” Macron said during a joint press conference with President Abdel Fattah El-Sisi after the two leaders held talks in the Elysee Palace.
“It is more effective to have a policy of demanding dialogue than a boycott which would only reduce the effectiveness of one our partners in the fight against terrorism,” he added.

Meanwhile, Sisi said that he was working to secure the future for the Egyptian people in the region.

“The security of 100 million Egyptians falls upon me,” he said, accusing the Muslim Brotherhood organization of exporting extremist ideology to France and the rest of world.

Macron has previously voiced concern that Egypt might turn to the West’s rivals, China and Russia, if it did not receive adequate support from Europe. The comments by the French leader are likely to jar with human rights groups, 20 of which issued a joint statement ahead of Monday’s meeting condemning France’s strategic partnership with Egypt.

Egypt was “abusively using counterterrorist legislation to eradicate the legitimate work in favor of human rights and suppress all peaceful dissent in the country,” the statement said.

Since taking power in a 2013 coup, el-Sissi has been in charge of a massive crackdown, targeting not only Islamist supporters of his freely elected predecessor, Mohamed Morsi, but also pro-democracy activists.   Just days before el-Sissi arrived in France, Egyptian authorities released three workers from the Egyptian Initiative for Personal Rights, who were detained in November following a meeting with diplomats from Western countries. An investigation is still pending into charges of their belonging to a terrorist group and spreading false news.

Macron made his remarks at a press conference with El-Sisi after the two leaders held talks at the Elysee Palace. Sisi was making a two-day visit to France, though hopes of nurturing closer ties were overshadowed by a furor over Cairo’s rights record. Macron also said that while progress had been made in stabilising Libya, threats persisted from external actors. It is therefore clear that France needs Egypt in order to secure its interests in Libya, which have been hampered in recent months.

Egypt-France trade on the rise

It appears France has also increased its trade and economic interaction with Egypt.

Bilateral trade between Egypt and France reached $2.4 billion in 2019 and $1.6 billion in the first nine months of 2020, according to data released by the Central Agency for Statistics and Public Mobilization (CAPMAS) on Monday.

Egypt’s exports to France amounted to $654 million in 2019 and $412 million in the January-September period of 2020, while the North African’s imports from France stood at $1.746 billion last year and $1.231 billion in the nine-month period ended on 30 September.

Meanwhile, Egypt’s most notable imports were pharmaceutical products, amounting to $255.2, followed by cars, tractors and bicycles, with a value of $219.2 million, while grain imports amounted to $171.8 million, electrical appliances at about $144.5 million, and imports of chemical products at $125.4 million.

The CAMPAS issued these figures to mark the visit of the Egyptian President Abdel Fattah El-Sisi to France.

France’s ambitions in the Middle East

France has already shown in recent years that it has its own ambitions in the Middle East. Its recent geopolitical activity in the region has shown that this is the case.

About three months ago, Lebanon suffered a major catastrophy. The Beirut Blast, a huge explosion devastated the port area of the capital. The blast killed at least 100 people and injured more than 4,000 others, plunging an already politically and economically fragile Lebanon into a major crisis. France, led by President Emmanuel Macron, rushed to the rescue of the ailing nation,with supplies, crisis and health care workers, and strong leadership, attempting to establish a new political order. This swift and comprehensive action by France, especially on the political front, has raised many eyebrows, leading many to question France’s intentions in the Arab nation with a French colonial past.

In a move that has concerned many, including the US, Macron has attempted to contact Iranian-backed Hezbollah in Lebanon to have a political dialogue. The French president has treated Hezbollah as any other Lebanese political party, avoiding discussions of the group’s weapons or regional influence outside the scope of the state. The US has heavily opposed this, as David Schenker, assistant secretary of state for Near Eastern affairs, said on Wednesday the US administration backs French efforts in Lebanon, but that the two countries did not see eye-to-eye on the relationship with Hezbollah. “We do have a small difference on Hezbollah, and how we see the organisation,” Schenker said at a virtual appearance with the Brookings Institution.  “We don’t believe they are a ‘legitimate political party’. We do believe that you have to choose between bullets and ballots, that political parties don’t have militia to enforce their support, or to threaten and intimidate other politicians and political parties.”

France has been involved in Libya for a long time. French interventionism and interference in domestic Libyan affairs goes back decades. Having completely failed in its attempts to control and guide the Libyan revolution in the direction it desired, France de facto withdrew from the North African country by the end of 2012. France then returned in late 2014 when, partially to gain credit with its most important defense-industry client, the United Arab Emirates, it threw its weight behind the Egyptian- and UAE-sponsored warlord Khalifa Haftar, a former Gadhafi-era general who defected in the late 1980s. Despite France’s official claims to the contrary, French troops were present in Libyatraining and assisting Haftar’s forces. The crash of a French military helicopter near Benghazi in 2016, which killed three members of France’s special-operations forces, provided solid evidence confirming what until then were only rumors of French involvement. France’s backing of Haftar and the LNA has continued and is still present. Therefore, when Turkey began its involvement in Libya, by intervening in support of the UN recognized Sarraj government, and changed the tide of the war, France became enraged, and publicly attacked Turkey’s tole in Libya.

France has never been absent from the Middle East theatre since the Napoleonic campaigns and the ill-fated invasion of Egypt and Syria by France between 1798 and 1801. For the two centuries that have followed France has remained a major player positively or negatively in the fate of many countries in the region. The French role in the region diminished after the end of the cold war and with the United States dominating the scene after the first Gulf War. But over the past few years, the French role has been getting larger and stronger under French President Emmanuel Macron’s leadership.

With Egypt being one of the strongest geopolitical players in the Middle East, and a large counter the the increasingly influential Turkey, France’s strengthening alliance with Egypt (with which it has historical ties) comes as no surprise, and could be the key to France getting a stronger grip on the Middle East, especially starting with the Gulf states. It remains to be seen how far France’s ambitions go in the Middle East, but the way in which the nation is getting closer to Egypt points to a plan of increased involvement.