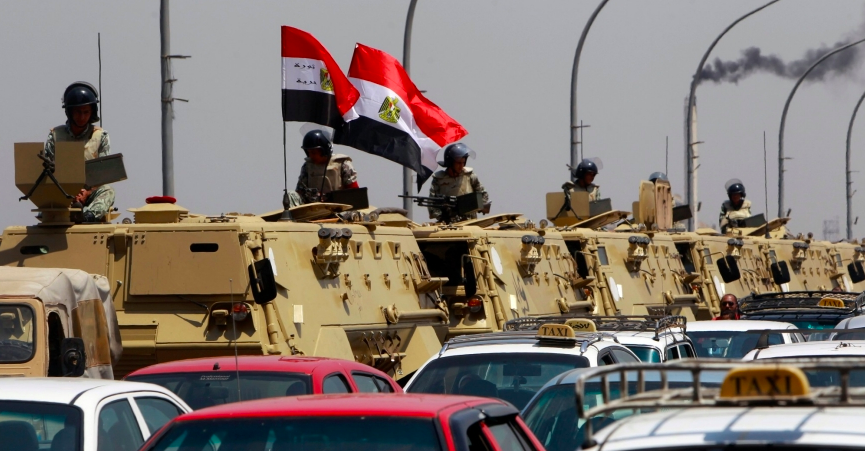 Egypt is working to enhance its cooperation and relations with Iraq, notably in the military field.

During a Dec. 10 meeting with Iraqi Minister of Industry and Minerals Manhal Aziz Mahmoud in Cairo, Egyptian Minister of State for Military Production Mohamed Ahmed Morsi announced his country’s readiness to develop Iraq’s defense industry and establish complete production lines in Iraq. According to a Dec. 10 statement released after the meeting by the ministry, the Iraqi side agreed on mutual visits by technical delegations from both countries to discuss the production of weapons and ammunition.

On Dec. 9, an Iraqi delegation headed by Iraq’s Minister of Planning Khalid Batal Najim signed a number of agreements in the economic, agricultural and military industry fields during a visit to Cairo. During his Nov. 26 meeting with Iraqi Defense Minister Juma Inad Saadoun, who was visiting Cairo, Egyptian President Abdel Fattah al-Sisi stressed that his “country is keen on cooperating with Iraq in all fields, mainly the military.”

Sisi emphasized Egypt’s interest in “military cooperation with Iraq to support the country in overcoming all the challenges it faces and help it strengthen its national institutions and maintain its security and stability.”

On Nov. 29, Saadoun visited several military factories in Egypt, most notably the tank production and mantenance facility called Factory 200 in Helwan and a facility in Qalyubia called Factory 300.

Egypt’s minister of military production, who accompanied Saadoun in his visit to production factories, also stressed his country’s “interest in cooperating with the Iraqi Defense Ministry and in strengthening the strategic partnership between [Egyptian] military production companies and Iraqi companies.”

A tripartite summit was held in August in the Jordanian capital Amman between Egypt’s President Abdel Fattah al-Sisi, Kadhimi and Jordan’s King Abdullah II. In his speech, Sisi said his country was ready to provide expertise to Jordan and Iraq and to establish joint development projects that will directly benefit citizens. He went on to stress the need to boost political and security cooperation between the three countries to fight terrorism.

“Egypt will also cooperate with Iraq in the field of combatting terrorism, especially since the country suffers from the proliferation of Iran-backed armed groups. There will also be cooperation in the defense industry,” he added.

Egypt wants to play a role in Iraq’s reconstruction

In addition to the development of military ties, Egypt is looking to play a role in the economic reconstruction of Iraq.

Egypt and Iraq have signed an oil-for-reconstruction plan this December, expected to come into effect once constitutional procedures have been completed. This deal marks the start of several joint projects between the two states.  The agreement, announced by Egyptian Prime Minister Mostafa Madbouly, means Egyptian companies will establish development projects in Iraq in return for oil imports for Egypt. Egypt is expected to form a permanent follow-up committee to cut through any red tape that might prevent the commencement of the agreement.

As relations between the two states continue to improve, Madbouly signed 15 new agreements in Baghdad in November. Egyptian President El-Sisi has given his encouragement for greater cooperation from the Egyptian side, to ensure these agreements are implemented quickly and effectively. This comes as part of his plan to enhance the Arab national role.

The oil-for-reconstruction plan comes after the October Egyptian-Iraqi Higher Committee which concluded with the objective to strengthen economic diplomacy between Egypt and Iraq.

Prime Minster Madbouly also signaled a greater number of joint ventures between Egypt, Iraq, and Jordan, which will follow a tripartite summit in early 2021. Egypt is expected to outline several development projects across several different industries going into the conference.

Egyptian Minister of Petroleum Tarek El-Molla highlighted some of the challenges for Egypt’s energy sector this year, as support for petroleum products decreased by 46 percent at the start of the 2020-21 fiscal year. Greater cooperation with other states as well as the potential for investment in Egypt’s industries will help strengthen the country’s energy sector as well as the economy as a whole.

Iraqi Minister of Planning Khaled Battal said that Iraq is keen to arrive at a specific list of development projects, which will be implemented in cooperation with the Egyptian side.

“In the next few years, a specific list of projects that will be implemented will be reached, provided that it includes one or two projects nominated by each of the relevant ministries, and that there will be continuous follow-up by the relevant ministries on both sides, bearing in mind that a specific timetable will be set for the implementation of these projects, which has been agreed upon between the two sides,” Battal said.

Will relations with Turkey be an obstacle?

As Egypt increases its economic and military influence in Iraq, it is becoming evident that there will eventually be a clash of interests with Turkey, who already has a military presence in Northern Iraq, and is in recent months strengthening its own ties with Baghdad.

The leaders of Turkey and Iraq met for talks as shared security concerns over the influence of Kurdish militants bring the neighbors closer. President Recep Tayyip Erdogan is hosting Iraqi Prime Minister Mustafa Al-Kadhimi in Ankara on Thursday. The Turkish military has been fighting the autonomy-seeking Kurdish PKK for decades, occasionally striking the group’s bases inside Iraq. It intensified those attacks, and sent troops into northern Syria to confront an affiliated Kurdish force, as the multinational war to defeat Islamic State left the Kurds in control of more territory.

The PKK, designated a terrorist organization by the U.S. and European Union, helped drive the jihadist movement from the northern Iraqi town of Sinjar in 2015. But recent attempts by Iraqi Kurdish forces to evict the PKK from their self-governing area led to clashes. Turkey has long urged Iraq to deny shelter to the PKK, and promised unspecified support to Baghdad and the Iraqi Kurdistan Regional Government, which have opposed unilateral Turkish incursions.

Erdogan and al-Kadhimi were to discuss combating terrorism, the reconstruction of Iraq as well as improving trade and energy ties.

“As Turkey, we will give any support we can to fully clear the country from this terrorist organization,” Turkey’s Foreign Minister Mevlut Cavusoglu told a joint press conference with his Iraqi counterpart, Fuad Hussein, referring to the PKK and affiliated Syrian YPG.

“Particularly, clearing the town of Sinjar from the PKK is important for the future of Iraq.”