Bangladesh and China have maintained good relations for much of history. Today the two countries share a strong strategic relationship, with China playing a vital role mainly in terms of economic and infrastructure development of Bangladesh. However things weren’t so good especially during the time when Bangladesh gained independence from Pakistan and the subsequent years until around the mid 1970s.

During Bangladesh’s War of Liberation in 1971, there was a outbreak of complex geopolitical rivalries. India had allied with Bangladesh due to their long-term conflicts with Pakistan, and more so because Bangladesh was actually a part of Pakistan after the end of the British empire since 1947. China had been allied with Pakistan for most of history, and the ties strengthened especially around the time of the Sino-Indian war in 1962. As a result China opposed Bangladesh’s independence and vetoed their UN membership until 1974.[1]

It was only after the military coup in Bangladesh in 1975 that relations between Bangladesh and China started to improve. Prime Minister of Bangladesh since their independence, Sheikh Mujibur Rahman had close ties with India, and only months after the military takeover, China eventually recognised Bangladesh as an independent state as diplomatic relations were secured.[2] This dramatic transformation was fascinating, but it did not come as a surprise as the military rule led by President Ziaur Rahman distanced Bangladesh from India and the Soviets[3], which can possibly be regarded as one of the most significant reasons for their improved relationships. Ziaur Rahman helped restore free market economy in Bangladesh[4] and made a visit to China in 1977 which is regarded as a crucial step in laying groundwork for bilateral cooperation, which was followed by Chinese visits to Bangladesh in the late 1970s. Since then state visits between the two countries have been regular most of which have resulted in positive discussions and signings of agreements on political, economic and security issues.

Bangladesh and China share a very strong relationship that ranges from the spheres of the economy, politics, development to defence and security. Today, Bangladesh considers China an “all-weather friend and a trusted ally”[5]. The cooperation dates back to Bangladesh’s  military rule in the mid-70s, however the democratically elected governments since 1991 have been able to keep up the good relations. In a 2010 visit to Bangladesh by then Chinese Vice President Xi Jinping, he stated that Sino-Bangladesh relations would remain strong regardless of any change in the domestic or international situation.[6] Bangladesh Prime Minister Sheikh Hasina on the other hand reiterated the importance of the country’s bilateral relations with China considering them a major ally of the highest significance.[7]

One of the most important aspects of the Sino-Bangla bilateral relations is the economic cooperation. China are by far the largest trading partner of Bangladesh with the latest World Bank figures revealing that Chinese exports to Bangladesh to be worth over US$ 10 billion (in 2015)[8]. On the other hand Bangladesh is China’s third largest trade partner. Majority of Bangladesh’s imports from china consist of raw materials for clothing and textile.[9] However the balance of trade between the countries is significant with Bangladesh having a deficit of approximately US$ 9 billion.[10] Reduction in trade deficit has been a primary concern for Bangladesh over the years, and following negotiations China agreed to provide duty-free access to around 5000 Bangladeshi products to the Chinese market under the Asia Pacific Trade Agreement (APTA) which has so far resulted in a slight decline in the ratio of trade deficit[11].

Talks have been in progress for several years about Bangladesh seeking a zero-tariff access of 99 percent items including Ready-made garments products in order to improve balance of trade. China’s meteoric rise in becoming the 2nd largest economy in the world only behind the United States by toppling Japan was possible largely due to its diversified economy, while having 14 FTA’s with developed as well as developing countries around the globe.

However there are some challenges of the FTA, mainly with regard to China’s ‘Made in China 2015’ industrial policy plan. There are significant restrictions on investing in China, and also preference is given to state-owned enterprises that control 38 percent of industrial assets in China, skewing competition in the market in favour of those.[12] Also another concern for foreign investors is the ‘Chinese ways’ of implementation and enforcement of laws and regulations which tend to be ambiguous and lax.

A major geopolitical challenge concerning the FTA would come from the United States and India, especially with India also having a strong alliance with Bangladesh. Chances are that India may take the Chinese assertion in its backyard as a means of increasing influence in India’s sphere, while the United States may consider an FTA as a geostrategic obstacle in containing China at the Bay of Bengal and the Indian Ocean region. However, if Bangladesh wants to achieve a fairly unrestricted access to Chinese markets it needs to keep pushing further on the negotiation table, while asserting to their other major allies, India and the United States that the actions are for their own best interests mainly in terms of economic development.

Will the US-China trade war have an impact on Bangladesh?

The recent trade war instigated by Donald Trump with his protectionist approach, with Chinese retaliations following by, has had impacts in the Bangladeshi economy. There has been a rise in steel prices (mainly rods) in the domestic market threatening both the major public infrastructure projects and the real estate market due to the US imposing tariff on US$ 34 billion worth of exports from China, while the latter imposed tariff on American cotton, and while China plan on importing cotton from India, the prices had already increased by 10-12 percent. It must be noted that more than half of Bangladesh’s cotton imports are from India  [13]. Soaring cotton prices would significantly hurt Bangladesh’s economy as they would affect the readymade garment sector.

Despite having strong economic ties there have been disagreements; a significant one is Bangladesh’s refusal of agreeing to China’s terms and conditions for the construction of the Sonadia deep-sea port in 2014.

Defence cooperation has been one of the major strengths in the bilateral relations between the two countries. China happens to be the only country that Bangladesh has signed a defence agreement with, which was done in 2002. Since then China had been the largest supplier of weapons and military equipment to Bangladesh, with latter being the 2nd largest recipient of Chinese arms in the world between 2011 and 2015[14]. Between 2013 and 2017 China has provided Bangladesh with 71 percent of all their arms purchases[15]. Bangladesh also recently purchased their first submarines to add to their naval fleet causing concerns in India. The Bangladeshi armed forces have acquired large numbers of tanks, large-calibre artillery, armoured personnel carriers, small arms and light weapons (SALW) as Chinese arms are the Bangladeshi Army’s weapon of choice while the Navy use Chinese frigates with missiles, missile boats, torpedo boats among others. China have also been supplying fighter jets and training aircraft to the Bangladeshi Air Force since 1977[16].

Very recently China and Bangladesh made crucial developments in security cooperation. The bilateral relations between the two countries have been elevated to ”Strategic Partnership of Cooperation”. The deal is aimed at intelligence sharing and counterterrorism activities, although other important matters such as cybercrime, militancy, transnational crimes, narcotics, fire service, and visa issues were also discussed during the signing of this major agreement[17].

Development cooperation is an integral part of the bilateral relations between China and Bangladesh. China has played a crucial role in the infrastructure development of Bangladesh over the years. It has assisted Bangladesh in building bridges, roads and railway tracks and power plants. The development assistance from China to Bangladesh and other developing countries mostly come as LOC’s. During a recent Bangladesh visit in 2016, President Xi Jingping promised US$24 billion in economic assistance to Bangladesh mainly as LOCs related to 24 projects[18].

China has also provided economic assistance to Bangladesh in terms of free aid and token gifts. Two major agreements were signed in 2010 for establishing a fertiliser factory, and telecommunications network systems in Bangladesh- that were to be set up with a US$ 770 million LOC from China with a two percent interest rate payable within 20 years[22]. There had been discussions for several years on potential road and railway connections linking Chittagong with Kunming that would boost the economies of both the countries however that has not materialised as of yet[23]. Currently China is developing a 750-acre industrial park in Chittagong which will take five years to become fully operational and it will largely be used by Chinese manufacturing firms[24].

The good relations shared between China and Bangladesh have always been of mutual interests and both countries benefit from that. Although the growing relations between China and Bangladesh raise geopolitical tensions in the South Asia region and the Bay of Bengal, there should not be much doubt that China’s primary interest lies in the booming economy of Bangladesh, which has been ever so dependent on their bilateral trade relations. Bangladesh Prime Minister Sheikh Hasina has recently said that there is nothing to be concerned about for India while not explicitly mentioning China or any other country, and that Bangladesh need funds for the sole purpose of development and that she would welcome any country that is willing to invest in the country; she also urged India to maintain cordial relationship with all its neighbours[25]. Keeping close ties with Bangladesh will no doubt be hugely beneficial for China as the demand for oil and gas have risen largely owing to its growing industries, and having a strong geopolitical presence in the Bay of Bengal and the littoral countries could give them an advantage in terms of accessibility to various ports. On the other hand Bangladesh can only benefit from the cooperation with a major economic power as it has done so in terms of their diplomatic, economic and security affairs and would be keenly anticipating further developments in their bilateral cooperation. 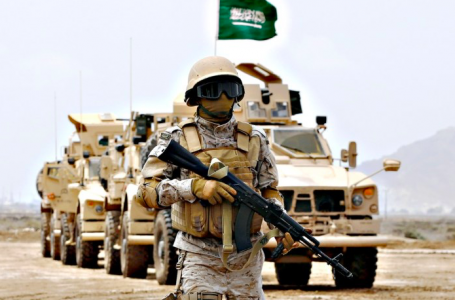 Why is Saudi Arabia trying to build...