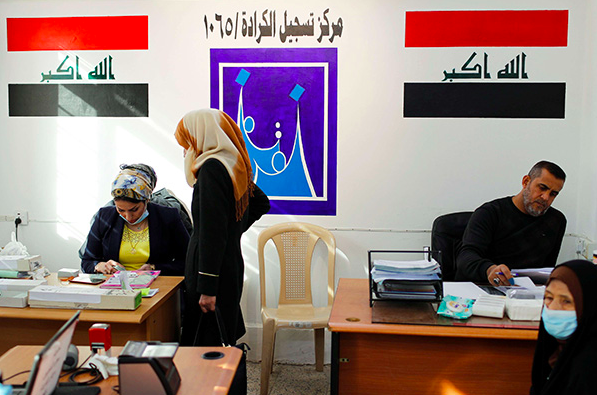 The Law on Parliamentary Elections consists of 50 provisions in nine chapters that discuss the purpose of the law, the rules for nominating and electing candidates, the electoral system and electoral districts, and voter registration. Article 49 of the new law would abolish the previous election law, Law No. 45 of 2013.

The new law would reduce the number of MPs from 329 to 251 (art. 13(1)) and the age of candidacy from 30 to 25 (art. 8(1)). It would also institute a new election system that did not exist in the previous election law that would allow voters to elect individual lawmakers instead of choosing from party lists. (Art. 15.)

The new electoral law tries to respond to protestors’ central demands for a more open system by increasing electoral districts and adopting individual nomination procedures for candidates a demand first raised during the 2016 demonstrations and reiterated in 2019.

President Barham Salih took up the task of drafting the law with the help of several advisors and civil society organizations. He sent the first copy to the office of the prime minister on 11 November 2019 for approval. The first draft brought together three important electoral dimensions: the general parliamentary elections, local elections (i.e., for governorate councils), and the organization of the Independent High Electoral Commission that oversees the electoral process. The Prime Minister did not propose any substantial changes.

Once the draft law was transferred to parliament, various disputes among political actors arose – particularly regarding the formation and distribution of electoral districts. In the end, the parliament approved the parliamentary electoral law after introducing a number of amendments to the initial draft sent by the prime minister.

The parliament’s amendments to the president’s draft law removed provisions that took into account the protesters’ demands. For example, the president’s draft suggested that there should be a district for each electoral seat, as the protesters had called for. The final adopted annexe to the law artificially divides electoral districts without relying on any existing administrative jurisdiction, but based the number of electoral districts upon the existing women’s quota in parliament, which is set at 83 parliamentary seats. This division relies on the distribution of seats according to the population size in each governorate. This proved impractical and did not rely on clear geographical delimitations. In addition, the president’s draft had set the minimum age for candidacy at 25, which the parliament later raised to 28. Raising the age for candidacy appears in contradiction with the number of young people in Iraqi society, most of whom led demonstrations in 11 governorates in October 2019.

The intervention of political powers in dividing the electoral districts is clear in areas where they are guaranteed influence among the population. For example, the delineation of districts in al-Anbar governorate combined regions 320km apart into one district in order to join members of the same clan and ultimately guarantee their votes will go to a specific candidate or party. The same applies to Kirkuk, which is divided between Arabs, Kurds and Turkmen, and to Diyala and Baghdad, which are both divided along sectarian lines.

The new electoral law might have served as an important lever for independent candidates and smaller actors in a normal political and security situation as it grants them momentum and support through grass-roots bases. However, in practice, many believe it is likely that it will be the existing parties with strong local presence and ability to influence, such as the Sadrist Movement led by Muqtada al-Sadr, that are likely to benefit the most.

Does this help Iran?

There is rising skepticism regarding the upcoming elections, especially worries about it being taken advantage of by Iran. Such scepticism is the fruit of successive indications of political stagnation that have led to the same climate and conditions that prompted previous elections and which have allowed the same political forces that have ruled Iraq since the US invasion to retain power. Especially Iran.

In recent weeks, the spectre of foreign interference has begun to haunt the elections scheduled for October, at a time when dozens of political parties and electoral alliances are rushing to form, without clear programmes or logical foundations for partnership.

Though the UN said its contacts are aimed at helping Iraq conduct fair and transparent elections, Iraqis viewed the consultations as UN recognition of Iran’s role in Iraq as a fait accompli.

In a statement issued after his meeting with the UN envoy, the Iranian official described the upcoming elections in Iraq as “very decisive,” expecting them to be “good.”

Iraqis considered Velayati’s words to echo his confidence that Iran-aligned political forces from Shia parties and militias will emerge victorious, as this is the measure of elections’ “good quality” for Iran.

“The two sides discussed recent developments in Iraq, as well as the elections that Iraq will witness at the end of this year,” a statement released by Velayati’s official website said.

Velayati said there was “the need for no state to interfere in Iraq’s internal affairs and that its people and government are the ones who make the decisions,” while Plasschaert stressed “the importance of free and fair elections in Iraq.”

Furthermore, Populist Shia cleric Moqtada al-Sadr, who has in recent months grown closer to Iran, said he would push for the next prime minister to be a member of his movement for the first time. On Tuesday, leading Sadrist lawmaker Hakim al-Zameli upped the ante in a televised interview.

“If the premiership goes to any party other than the Sadrist movement, it means the elections are rigged,” he said.

His comments came a day after Sadr supporters equipped with heavy weapons took to the streets of Najaf and other cities, including Baghdad. Al-Sadr’s supporters are expected to make significant gains under the new electoral system.

In order to avoid foreign intervention, Iraq’s Independent High Electoral Commission (IHEC) has sent invitations to embassies of 52 countries to monitor the country’s elections slated to take place on October 10, a poll official told the media.

On Wednesday, Jumana al-Ghalai, spokeswoman of the IHEC, told the al-Sabah newspaper that the Commission’s law allows the recruitment of international observers to monitor the election process to ensure its transparency, reports Xinhua news agency.

October’s elections will decide the 328 members of the Council of Representatives who will in turn elect a new President and Prime Minister.

“The IHEC is currently continuing its preparations for holding the elections on the scheduled date,” the newspaper quoted al-Ghalai as saying.

Meanwhile, Abdul-Hussein al-Hindawi, advisor to rime Minister Mustafa al-Kadhimi, told the newspaper that the UN’s role in the polls is only to monitor the electoral process and not to supervise or run it.

This could curb Iranian influence in the elections, however, even under a fair election, the Sadr movement is likely to make big gains.

Iraq’s Cabinet members voted unanimously Tuesday to postpone this year’s general elections from June 6 until October 10, according to the state news agency INA.

The decision came after the country’s electoral commission urged more time to organize the polls in order to conduct free and fair elections. The postponed vote would still be a year earlier than the official end date of parliament’s term in 2022.

Last year, Prime Minister Mustafa al-Kadhimi called an early general election for June 2021, months ahead of the original date. The decision came in response to the demands from anti-government protesters, who since 2019 have staged months of mass demonstrations and been killed by the hundreds by both government forces and militia groups.

Back in 2020, the United Nations praised Kadhimi’s announcement, saying it would promote “greater stability and democracy” in Iraq.

In a meeting Monday between Kadhimi and President Barham Salih, both sides reiterated “the need to consolidate stability in the country, preserve the security and safety of citizens, strengthen the authority of the security services and enforce the law, protect community peace and security, prevent illegal actions and control fugitive weapons.”

“Delaying the elections would be a disaster for Iraq,” said al-Sadr, warning that rival parties would try to rig the vote.

“I don’t want fraud. That’s why I’m asking for UN intervention and supervision,” he said.

The postponement of the elections is probably simply due to the necessary legal arrangements needed to maintain their integrity, but tensions will rise as a result.