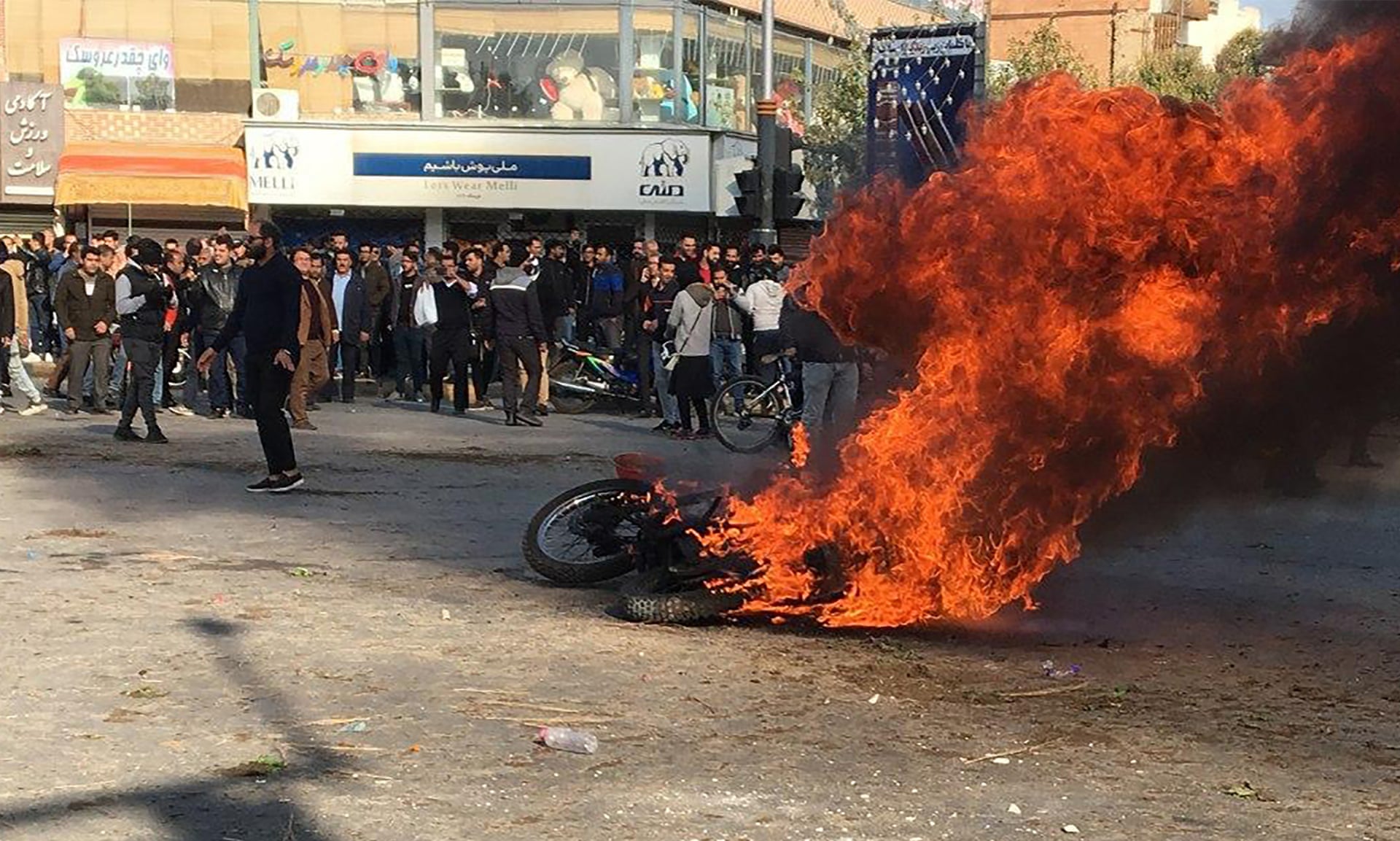 Iranian protesters gather around a burning motorcycle during a demonstration in the city of Isfahan against increased petrol prices Photograph: AFP via Getty Images

Iranian protesters gather around a burning motorcycle during a demonstration in the city of Isfahan against increased petrol prices Photograph: AFP via Getty Images

Is the mounting economic stress pressured on regime actually directed at the US?

Protests broke out across Iran last Friday, sparked by a sudden move to raise fuel prices, drawing a fierce crackdown by security forces, marking some of the worst violence in the country in years, with many Iranians being killed in the process. The protests have flared in many of the same areas that experienced unrest two years ago when demonstrators protested a similar proposal to slash state subsidies. Then, as now, lower-income Iranians rose up against a system that they said had failed them economically. However, this time the protests are not simply caused by the hike in fuel prices, but the buildup of economic strain that has been imposed on the working class especially through the large-scale US sanctions on the nation. The fuel price reform, which effectively raised the price of gasoline and diesel for most drivers from about 8 cents a liter to about 25 cents a liter, is meant to save the government a few hundred million dollars over the course of a year, as well as husbanding increasingly scarce supplies of motor fuel, which can be exported for greater earnings than essentially giving it away domestically. The government hoped that its plan to redistribute most of the revenue from the price hike back to low-income families would blunt the pain of the measure, but delays in getting cash back into people’s hands, and the immediate consequences left the protests still simmering through Tuesday. The fact that Iran would risk sparking such widespread anger for minimal economic gain highlights the dire condition of the Iranian economy, hammered by U.S. sanctions in its inability to export practically any oil, one of the main sources of revenue for the government. “They did the reform because they are broke,” said Alireza Nader, a senior fellow at the Foundation for Defense of Democracies (FDD). “People can’t afford a 300 per cent increase in gas prices, but the regime didn’t have any other choice.” Although it is clear that the protesters are directing their anger at the Iranian regime, it’s clear that they are aware that a large factor in the situation is the US sanctions, which could be lightly holding back the protests from a full-scale revolution.

Another reason as to why these protests in the last decade have never led to any effective power shift is the lack of political alternatives. Iran’s regime has set out an outline to the ruling bureaucracy that has effectively played a substitute to a political system, making a shift of power consequently meaning a complete political makeover. Iran’s political culture has always had a living source of authority who embodies the national will. Iranians have always had a king. Their failed experiment with constitutionalism at the turn of the last century never dislodged monarchic power, and the current Islamic Republic also has a living symbol of national authority, a clerical “supreme leader,” a king by another name. Imagining a thoroughly republican Iran, or a thoroughly secular one is the kind of liberal utopian folly that created the disaster in Iraq. In addition to this, there is no leading revolutionary figure in the protests, to whom the people could turn to achieve such a feat, which is detrimental to even think of such plans. It is therefore unsurprising that all the economically motivated protests against the Iranian regime, regardless of the scale, have remained precisely that. Protests, and not revolution.

Although the lack of direction and alternatives of the protests play an important role in their eventual demise, the Iranian regime has done a very good job of taking advantage of these drawbacks and making sure that they remain, and the protests do not gain coherence or a central popular alternative. They have often done this by oppressive and authoritative means, with no regard to the casualties drawn, but also with smart propaganda to diffuse the enthusiasm of protests, which is mainly done by rallies of support. With each, protest against the regime, comes the eventual rally of support, and it has once again most recently, thousands rallied in several Iranian cities on Friday in a state-organized show of support for Supreme Leader Ayatollah Ali Khamenei following a crackdown on anti-government protests. Television channels showed crowds chanting in support of the Islamic Republic and vowing “Death to America” in Mashhad, Shiraz, Qom and Esfahan. The vast majority appeared to be conservative supporters of the cleric-led establishment who often attend Friday prayers. Meanwhile, the regime showed its authoritative tactics as well by organizing an internet blackout in the country, hence distorting the coherence of the protests. This is a costly move that highlights an earlier point, that the regime is willing to shut down the protests by any means possible. Besides social consequences, there may be serious economic ones too, says Alp Toker at internet-monitoring non-profit NetBlocks  “We estimate that the economic impact to Iran is in the region of $60m (£46m) per day.”It’s a harmful strategy and sets a dangerous precedent,” he adds.