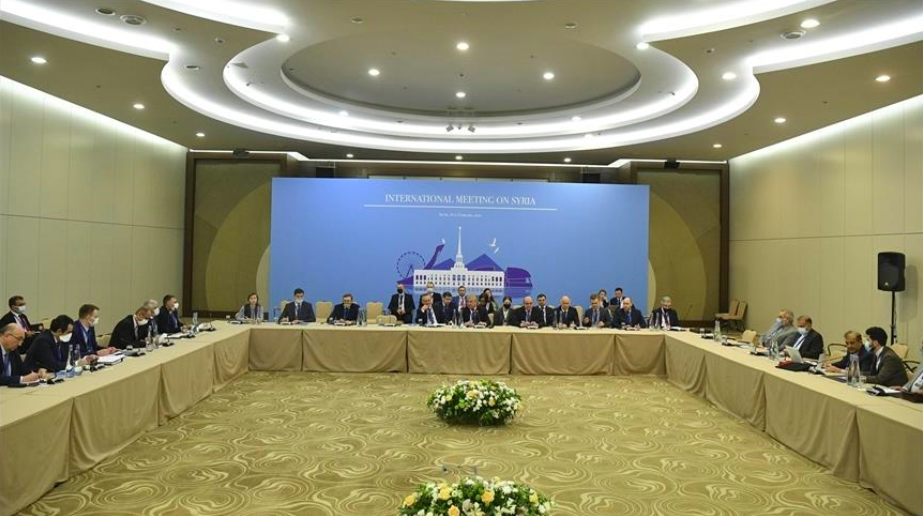 Convened to discuss the situation on the ground in Syria, the meeting of Turkey, Russia and Iran ended on Wednesday, the Turkish Foreign Ministry said.

“The fifteenth round of the International Meeting on Syria in Astana format was held on 16-17 February 2021 in Sochi, Russian Federation,” the ministry said in a written statement.

During the meeting, “the current situation in the political process within the context of the Constitutional Committee as well as the developments in Idlib and the east of Euphrates were mainly discussed,” it said.

The meeting came soon after the recent failures of the Syrian Constitutional Committee in Geneva in January.

The Sochi meeting reaffirmed determination to support the committee’s work through continuous interaction with the Syrian parties, the committee delegates and Geir Pedersen, the UN special envoy for Syria, to ensure its sustainable and effective functioning, the ministry said.

“The Parties also underscored the importance of adhering to the Terms of Reference and Core Rules of Procedure in order to make progress in Committee’s work and to implement its mandate of preparing and drafting a constitutional reform,” the statement read.

Turkey also highlighted the necessity for a “structured work plan and methodology” for the committee to function efficiently.

Threats against the political unity and territorial integrity of Syria and the national security of neighboring countries were rejected in the meeting.

The statement also said the meeting underlined that “opportunistic and illegitimate attempts” in the country under the pretext of counter-terrorism were unacceptable.

“Increasing terrorist acts in Syria which resulted in loss of innocent lives were condemned and the concern on rising attacks against civilians in the northeast of Syria was expressed,” it added.

The parties also reiterated commitment to maintaining calm on the ground by implementing deals on Idlib, northwestern Syria. “We emphasized our expectation of cessation of cease-fire violations and attacks targeting civilians,” Turkey’s statement noted.

“The Working Group on the Release of Detainees/Abductees, Handover of Bodies and Identification of Missing Persons also convened in the margins of the meeting. The future activities to develop cooperation regarding the mutual and simultaneous release of persons detained by the opposition groups and the regime were also discussed in the meeting,” the ministry said.

In a declaration issued following the meeting, the parties condemned the ongoing Israeli military attacks in Syria which violate international and humanitarian law and undermine the sovereignty of Syria and neighboring countries.

The sides also agreed to continue cooperation in order to ultimately eliminate DAESH/ISIL (formerly known as the Islamic State – TASS), Al-Nusra Front and all other individuals, groups, undertakings and entities associated with Al-Qaeda (outlawed in Russia – TASS) or DAESH/ISIL, and other terrorist groups, as designated by the UN Security Council, while ensuring the protection of civilians and civilian infrastructure in accordance with international humanitarian law.”

Idlib is the only Syrian region, which is mainly under control of armed groups of Syria’s opposition and Al-Nusra Front. A northern de-escalation zone was set up in Idlib in 2017 to give shelter to militants from other Syrian regions who had refused to surrender arms.

The meeting was also participated by delegations of Jordan, Iraq, and Lebanon as observers of the Astana format, as well as the UN and the International Committee of the Red Cross.

The parties decided to hold the 16th round of the meeting in Nur-Sultan, Kazakhstan in mid-2021, according to the declaration.

The Syrian Constitutional Committee meetings, which started in October 2019 with 150 members, are the first concrete step to draft a new constitution to determine Syria’s future.

The UN hopes that this would lead to negotiations which would subsequently lead to a peaceful end of the Syrian Civil War, which had been raging for more than eight years by the time of the committee’s formation. The Constitutional Committee was formed with the formal approval of both parties involved, namely the Government of the Syrian Arab Republic and the opposition Syrian Negotiations Commission, with the facilitation of the United Nations.

In its first days, the Committee managed to agree on a “code of conduct” for its members – which bound them to work with a “spirit of respect, cooperation and good faith”, avoid any actions which might harm other members, as well as refrain from distributing any documents from within the plenary room as “official papers”.

There have been several sessions and negotiation meetings since then.

Most recently, there have been negative signs from the committee, as the United Nations’ special envoy to Syria, Geir Pedersen, called the fifth round of talks by the Syrian Constitutional Committee in Geneva a “disappointment” Jan. 29.

“I told the 45 members of the drafting body that we can’t continue like this, that the week has been a disappointment. I set out a few things I thought we should be able to achieve before we started this meeting, and I am afraid we did not manage to achieve these things. I believe the reason for that is that there has not been a proper understanding on how we are going to make progress in the committee,” Pederson said.

“I will, of course, also have that discussion with the SNC [the National Coalition for Syrian Revolutionary and Opposition Forces], and as I already had this week, I will also be meeting, of course, with the Russians, with the Turks, with Iranians, with Arab friends and of course also Europeans, and hopefully also with the new US administration,” he added, expressing hope it will be possible for him to go to Damascus in the not too distant future.

Pederson briefed the UN Security Council on the deliberations on Feb. 9, saying that the regime delegation had rejected his recommendations. He also informed the Security Council that he will attend the upcoming Astana talks in Sochi on Feb. 16.

The Syrian Constitutional Committee, formed in 2019, is made up of 150 members, including 50 figures from the Syrian regime and 50 from the the Syrian opposition’s negotiating body, Syrian Negotiations Commission (NSC), in addition to representatives of civil society. From this committee, the UN selected a smaller committee of 45 to draft the document.

After the meeting in Geneva, Nasr al-Hariri, the head of the NSC, said in a virtual press conference in Geneva Feb. 3 that to the regime, the political process is merely a way to play for time until it retakes control through bloody military operations against civilians.

It therefore seems that the latest meeting between Turkey, Iran and Russia, and its outcome, has come at the perfect time, as the backing of the central powers that were in the conflict of the peace process and the constitutional committee will significantly help in reaching compromises.

Iran’s increasing rivalry with Russia for influence in Syria, as well as Israel’s airstrikes on Iranian positions in Syria will certainly be obstacles in attempting to facilitate a peace process.

Iranian forces and their allied militias in Deir ez-Zor province in eastern Syria have recently carried out new redeployment and repositioning operations to limit their losses in the event of Israeli airstrikes against their sites in the area. Their action included moving to new military sites and headquarters, hiding weapons and removing flags from the roofs of military sites and barracks as well as relying more on local members to guard military sites. Some armed formations also partially withdrew from their sites.

The biggest challenge facing the Iranian forces now is to maintain their cohesion in Deir ez-Zor and its countryside, as the violent suspected Israeli bombing that targeted their sites on Jan. 13 has pushed many members to flee their headquarters and military sites.

It seems that Russia will benefit from the presumed weakness that the Iranian forces are experiencing in Deir ez-Zor. The Russian-backed Fifth Corps seems to have become the go-to faction for these defectors. This may be an opportunity for Russia to expand at the expense of the Iranian forces in the strategic Deir ez-Zor province.

The province is particularly important for Russia due to its proximity to the border with Iraq and its vast underground wealth, including oil.

It seems that Russia had already started taking steps to expand its influence in Deir ez-Zor at the end of 2020, i.e., before the Jan. 13 airstrikes against Iranian positions in the province.

Political science researcher Mohammed Adeeb, who lives in the countryside of Aleppo, told Al-Monitor, “The Iranian-Russian competition in Deir ez-Zor is constantly escalating, and it is natural for Russia to take advantage of the state of weakness that Iranian forces are going through in the area after being directly targeted. Russia has also benefited from the alienation and fear of the Iranian forces and their militias among the popular circles there, which are afraid of cooperating with them or allowing their sons to join their ranks, as the popular circles in Deir ez-Zor prefer Russia over the Iranian forces.”

The SANA news agency claimed that Syrian air defenses shot down most of the missiles, which it said were fired from Syria’s Israeli-occupied Golan Heights.

The Britain-based Syrian Observatory for Human Rights, an opposition war monitor with a network of activists on the ground, said the strikes hit positions of the Syrian army’s Fourth Division in the mountains near the highway that links Damascus with the Lebanese capital of Beirut. It said another strike hit Syrian army positions in Kisweh, just south of Damascus.

It is therefore clear, that although the recent statements of support for the peace process by Iran, Russia and Turkey are positive signs, we have not yet seen action on this front from their side, other than a fairly steady ceasefire that is currently been observed. If any peace process is to progress, these powers must ensure that all parties involved are willing to engage in the UN-set negotiations, and are on the same page, which will be hard to achieve.