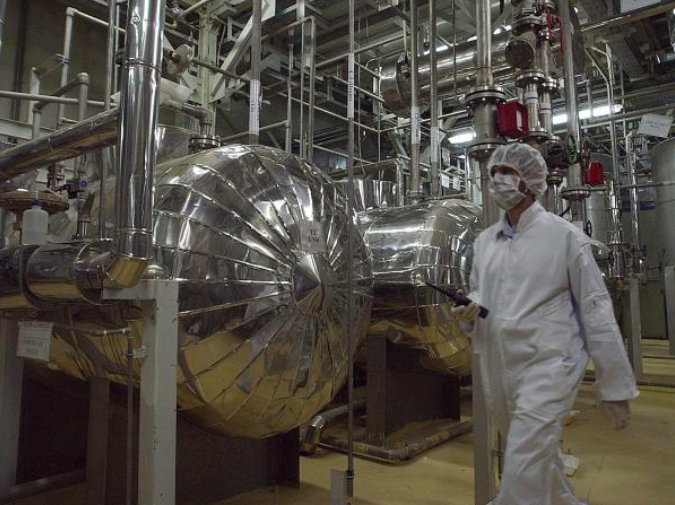 Iran has announced plans to enrich uranium up to 20% purity, just a step away from weapons-grade levels, as tensions with the US ratchet up during the final days of Donald Trump’s presidency.

The International Atomic Energy Agency (IAEA) confirmed it had been notified of Iran’s decision to increase enrichment at the Fordow facility, buried in a mountainside to protect it from military strikes, although Tehran did not say when the process would begin.

The weekend also marks the first anniversary of a US drone strike that killed top general Qassem Suleimani, with Washington apparently bracing for possible retaliation.

After the US stepped up military deployments and threatening language, Iran’s foreign minister, Javad Zarif, accused it on New Year’s Eve of trying to set up a “pretext for war”. In an apparent attempt at de-escalation the Pentagon has abruptly withdrawn the aircraft carrier Nimitz from the region, the New York Timesreported.

Enriched uranium can be used to make reactor fuel but also nuclear bombs. Weapons-grade uranium is 90% purity. A US state department spokesperson accused Iran of pursuing a “campaign of nuclear extortion”.

President Hassan Rouhani had ordered the move because he was “bound” by a new law requiring the production and storage of at least 120kg (265lbs) of 20%-enriched uranium annually for peaceful purposes, he said. Iran’s parliament passed the law following the assassination in late November of the country’s top nuclear scientist, Mohsen Fakhrizadeh, which Iranian leaders blamed on Israel.

“Iran today began feeding uranium already enriched up to 4.1% U-235 into six centrifuge cascades at the Fordo Fuel Enrichment Plant for further enrichment up to 20%,” a statement said.

What is the Iran nuclear deal, and is this a breach?

The Iran nuclear agreement, formally known as the Joint Comprehensive Plan of Action (JCPOA), is a landmark accord reached between Iran and several world powers, including the United States, in July 2015. Under its terms, Iran agreed to dismantle much of its nuclear program and open its facilities to more extensive international inspections in exchange for billions of dollars’ worth of sanctions relief.

However, the deal has been in jeopardy since President Donald J. Trump withdrew the United States from it in 2018. In response to the U.S. departure, as well as to deadly attacks on prominent Iranians in 2020, including one by the United States, Iran has resumed some of its nuclear activities.

The JCPOA, which went into effect in January 2016, imposes restrictions on Iran’s civilian nuclear enrichment program. At the heart of negotiations with Iran were the five permanent members of the UN Security Council (China, France, Russia, the United Kingdom, and the United States) and Germany, collectively known as the P5+1. The European Union also took part.

The P5+1 wanted to unwind Iran’s nuclear program to the point that if Tehran decided to pursue a nuclear weapon, it would takeat least one year, giving world powers time to respond. Heading into the JCPOA negotiations, U.S. intelligence officials estimated that, in the absence of an agreement, Iran could produce enough nuclear material for a weapon in a few months.

Iran had previously agreed to forgo the development of nuclear weapons as a signatory to the Nuclear Nonproliferation Treaty, which has been in force since 1970. However, after the overthrow of the Pahlavi dynasty in 1979, Iranian leaders secretly pursued this technology. (In 2007, U.S. intelligence analysts concluded that Iran halted its work on nuclear weapons in 2003 but continued to acquire nuclear technology and expertise.)  Prior to the JCPOA, the P5+1 had been negotiating with Iran for years, offering its government various incentives to halt uranium enrichment. After the 2013 election of President Hassan Rouhani, who was viewed as a reformer, the parties came to a preliminary agreement to guide negotiations for a comprehensive deal.

The European Union warned on Monday that Iran’s move to enrich uranium to 20 per cent would be a “considerable departure” from Tehran’s commitments under the 2015 nuclear deal. EU spokesman Peter Stano said Brussels would wait until a briefing from the director of the UN’s IAEA nuclear watchdog later in the day before deciding what action to take.

Earlier, an Iranian government spokesman said the Shahid Alimohammadi enrichment complex in Fordow had begun the “process for producing” uranium enriched to 20 percent. That would be well above the 3.67 percent cap set in the deal, known as the JCPOA, or Joint Comprehensive Plan of Action.

“If this announcement is going to be implemented… it would constitute a considerable departure from Iran’s nuclear commitments under the JCPOA,” Stano told reporters.

How will Biden react?

President-elect Joe Biden says he wants the United States to return to the 2015 Iran nuclear deal — if Tehran also resumes compliance. VOA’s Diplomatic Correspondent Cindy Saine reports from Washington that experts say they expect a shift away from the Trump administration’s maximum pressure campaign of crippling economic sanctions on Iran, but a U.S. return to the nuclear deal will not be easy.

This is especially true with the latest uranium enrichment, as Iran appear to drift away from the deal.

The Trump administration’s campaign of maximum economic pressure dispelled the argument that unilateral sanctions on Iran couldn’t work to damage the Iranian economy, a claim that supporters of the deal made to dissuade Washington from leaving the multinational framework to act on its own. Despite the protests of some foreign ministries, individual global companies have adhered to the sanctions because of the primacy of the American economy.

There are some who have already called on Biden to re-enter the Iran nuclear deal and lift sanctions. They believe doing so would help empower so-called moderates in Iran in its presidential election next June.

In January, the U.S. House of Representatives overwhelmingly passed Resolution 752, which condemned “the Iranian regime’s serious human rights abuses and destabilizing activities abroad.” In May, nearly the entirety of the House called on the United States to work to renew the U.N. arms embargo on Iran, which was allowed to expire as part of the nuclear deal of 2015.

Biden has a hard decision to make, but it seems clear that he will try to negotiate with Iran, and try to re-enter the nuclear deal, despite the latest enrichment activity from the latter. However, Iran’s latest actions will certainly complicate such hopes, and definitely prolong negotiations if Iran insists on this.