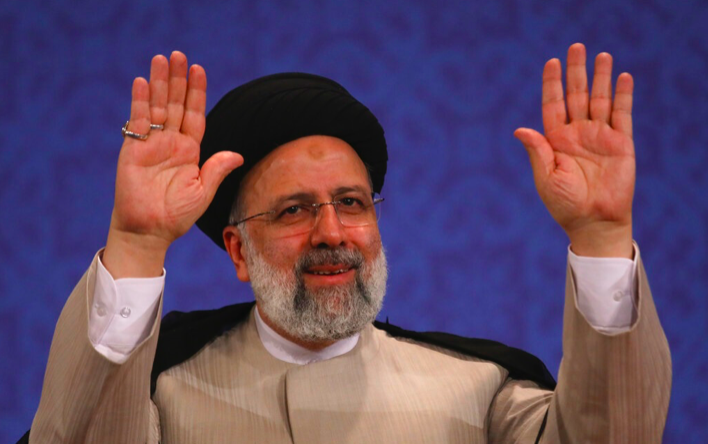 The ministry confirmed on Saturday that Raisi won 61.95 percent of the vote on a voter turnout of 48.8 percent – the lowest turnout for a presidential election since the 1979 revolution. Raisi got 28,933,004 votes.

At 3,726,870 votes, void votes finished second in the race, also for the first time since the establishment of the Islamic Republic.

“We didn’t have any violation that would have a significant impact on the outcome of the election,” Interior Minister Abdolreza Rahmani-Fazli said during a press conference.

Rezaei, Hemmati and Hashemi had conceded ahead of the announcement on Saturday.

Raisi will take office in early August, replacing moderate President Hassan Rouhani who was not allowed by the constitution to run for a third consecutive term.

“I congratulate the people on their choice,” said Rouhani on Saturday.

Raisi’s election marks a consolidation of power by the conservative and hardline camp, which already controls the parliament and will likely have a replacement for the judiciary as well.

The Muslim scholar, who wears a black turban to signify he is a descendent of Islam’s Prophet Muhammad, is also seen as the country’s next supreme leader.

Raisi has become the first Iranian president to be sanctioned by the United States even before assuming office as he was designated in 2019.

Raisi grew up in the northeastern city of Mashhad, an important religious centre for Shia Muslims where Imam Reza, the eighth Shia religious leader, is buried.

He attended the seminary in Qom and studied under some of Iran’s most prominent Muslim scholars, including Supreme Leader Ali Hosseini Khamenei.

After becoming the prosecutor for several jurisdictions, Raisi moved to the capital, Tehran, in 1985 after being appointed deputy prosecutor.

After moving up the ranks in the judicial system, in March 2016 he was appointed by the supreme leader as the custodian of the Astan-e Quds Razavi, the influential shrine of Imam Reza, where he controlled billions of dollars in assets.

He had run for president unsuccessfully against Rouhani in 2017, garnering 38 percent of the vote.

Raisi had promised to improve Iran’s economy that is ailing under US sanctions and the coronavirus pandemic that has exacerbated decades-long infrastructural issues caused by local mismanagement.

Despite previously opposing Iran’s 2015 nuclear deal with world powers, Raisi said during the presidential debates earlier this month that he will uphold the landmark accord as any other state commitment.

He did, however, point out that he will form a “strong” government to steer the agreement in the right direction.

Raisi said he supports negotiations to revive the 2015 nuclear deal, adding the U.S. first needs to lift sanctions. He made the remarks at his first news conference since winning Friday’s election.

However, he told reporters that his government would not “negotiate for the sake of negotiations” and ruled out any meeting with US President Joe Biden. “Our foreign policy does not start with the JCPOA [the nuclear deal] and does not end with the JCPOA,” Raisi told reporters at his first press conference since his landslide victory on Friday. “We will support any negotiations that meet our national interests. But we will not tie the economic situation and people’s livelihoods to these talks . . . We will not let the talks be protracted.”

“It was the US that violated the JCPOA,” Raisi said. “I insist to the US, it is you who were committed to removing sanctions and you did not. Go back to it and implement your commitments.” The outgoing government of President Hassan Rouhani, an architect of the accord, has for months been holding talks with the deal’s remaining signatories — the UK, France, Germany, China and Russia — to pave the way for the US to return and lift sanctions. The US has been an observer at the talks, but not directly involved.  When asked if his government would be willing to hold direct negotiations with the Biden administration, Raisi did not give an explicit answer, instead saying, “my serious suggestion to the US . . . is to show honesty by lifting sanctions”. Iran’s economy was plunged into a deep recession after Trump withdrew from the accord and imposed waves of sanctions on the Islamic republic. The punitive measures crippled the ability to export oil, the state’s key source of hard currency, and pushed inflation above 46 per cent as the rial plummeted. The recession has been exacerbated by the coronavirus crisis.

Raisi, who was the subject of sanctions by the Trump administration in 2019, also rebuffed allegations that he oversaw abuses at the judiciary, saying his record proved he was a “defender” of human rights.

Wider implications on the Middle East

The leaders of Turkey and Syria on Saturday congratulated Iran’s hardline president-elect, after he was declared to have won a landslide victory in an election in which all serious competitors were disqualified from running.

Erdogan said pleased to be visiting Iran for the upcoming term meeting of the High-Level Cooperation Council after overcoming the COVID-19 pandemic. Despite this, there are worries that Raisi, who has displayed his uncompromising stance on Iran’s military presence in Syria and Iraq, could severe ties with Turkey, who have increasingly been seen as a threat to Iranian influence on those countries in recent months.

Raisi, who is widely perceived to have been backed by Ayatollah Ali Khamenei, the supreme leader, insisted that Iran’s support for militant groups across the region and the development of its missile programme were “not negotiable”.

In addition to this, there have been worries that Raisi’s election could jeopardize the recent advancements in Saudi-Iran reconciliatory talks.

Saudi Arabia will judge Iranian President-elect Ebrahim Raisi’s government by “the reality on the ground”, the kingdom’s foreign minister has said, adding that Iran’s Supreme Leader Ayatollah Ali Khamenei has the final say on foreign policy.

Raisi, a hardline judge who secured an expected election victory on Saturday, said on Monday he wanted to improve ties with Gulf Arab neighbours while calling on regional rival Saudi Arabia to immediately halt its intervention in Yemen.

There is still hope that Raisi’s stance on the US and the nuclear deal will not reflected in its ties with the rest of the Middle East, as  he said on Monday that his government’s priority would be improving ties with its neighbours in the Middle East, while calling on Saudi Arabia to immediately halt interfering in Yemen.

He added: “Iran wants interaction with the world … my government’s priority will be improving ties with our neighbours in the region.”