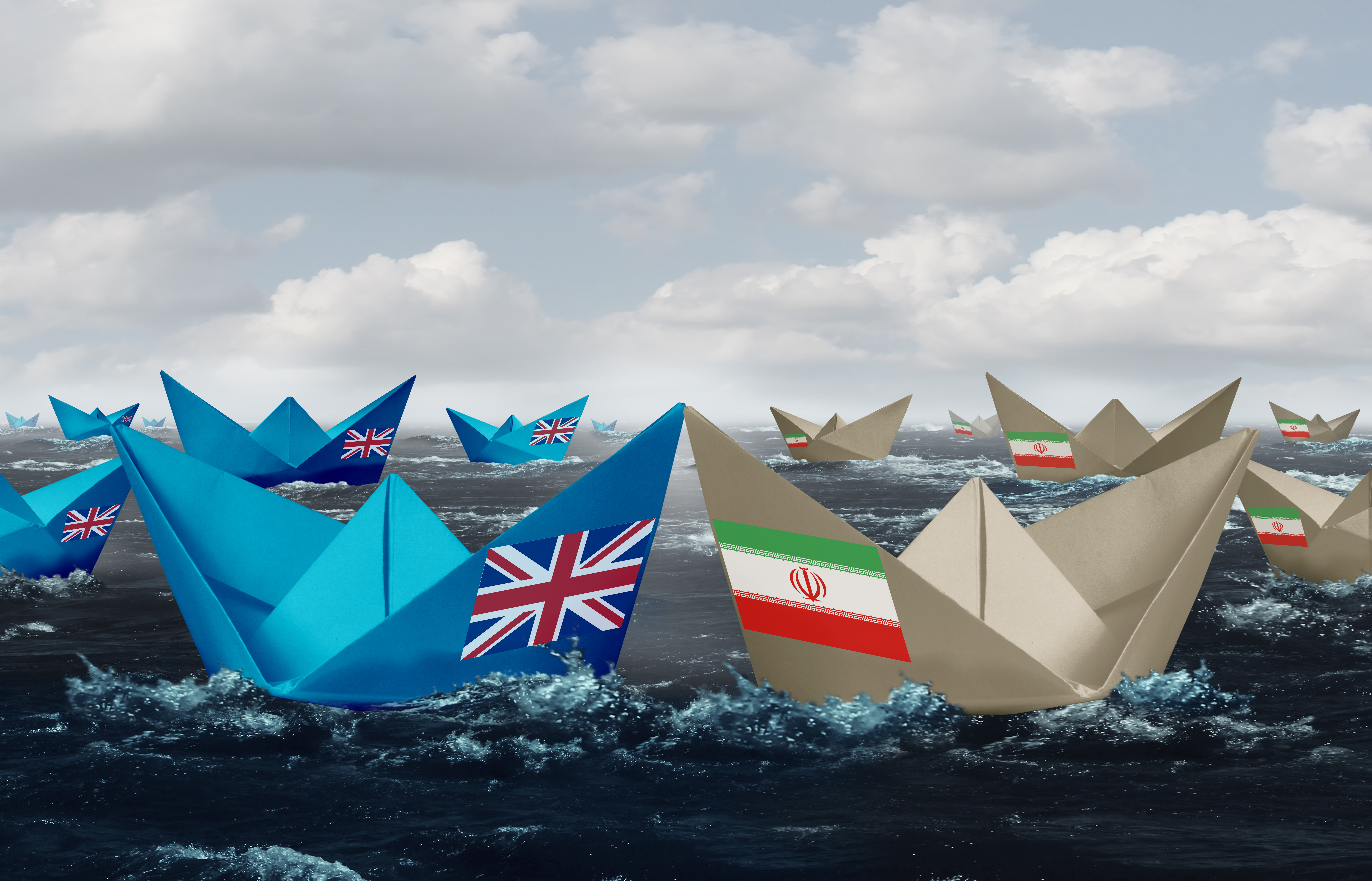 United Kingdom and Iran confrontation in the Persian gulf as a crisis in the middle east as Great Britain versus the Iranian government as boats in shipping risk in a 3D illustration style.

United Kingdom and Iran confrontation in the Persian gulf as a crisis in the middle east as Great Britain versus the Iranian government as boats in shipping risk in a 3D illustration style.

The Ministry of Defence has said that The Royal Navy will accompany British-flagged vessels through the Strait of Hormuz to defend freedom of navigation after Iran seized a tanker this month. The statement released stated: “The Royal Navy has been tasked to accompany British-flagged ships through the Strait of Hormuz, either individually or in groups, should sufficient notice be given of their passage,” a British government spokesman said. “Freedom of navigation is crucial for the global trading system and world economy and we will do all we can to defend it.” This is reportedly a temporary move before discussions about the development of an international maritime protection force in the Gulf between Europe and the US. It remains to be seen how Iran will respond but signals are not positive.

As for the formation of a coalition between Europe and the US to protect shipping in the Gulf, Iran has clearly warned against such an action, saying the move would only bring more insecurity and higher tensions in the region. This comes after,  Italy, Denmark, the Netherlands and France on Tuesday backed the UK’s proposal for a European naval force, reacting to the seizure of a British-flagged tanker in the Strait of Hormuz. The formation of a European coalition in the region could ensure the security of European and US trade ships, but will inevitably be a move that infuriates and spikes tensions with Iran.

Despite the warm welcoming words of Iranian foreign minister Javad Zarif upon the election of Boris Johnson as PM, congratulating him on his victory, Zarif also added that “Iran does not seek confrontation. But we have 1,500 miles of Persian Gulf coastline. These are our waters & we will protect them.” Johnson is expected by many to take a harder line on Iran than his predecessor and his recent comments have confirmed this. Johnson recently slammed UK opposition leader Jeremy Corbyn for appearing on Iranian state-owned TV and accused him of siding with regime hardliners rather than Britain’s allies over the Gulf crisis. This hostile approach seems to follow in Trump’s footsteps, an approach which has proven ineffective with Iran, only increasing the risk of conflict.

Iranian President Hassan Rouhani hinted on Wednesday that Iran might release a U.K.-flagged ship if Britain takes similar steps to release an Iranian oil tanker seized by the British Royal Navy off Gibraltar earlier this month. This could create an opening to reduce tensions with the UK, but only if Boris Johnson shows a willingness to cooperate. Rouhani added: “We do not seek the continuation of tension with some European countries,” which is a positive sign, while it is to be determined whether Iran’s promises will be fulfilled or not.

5. US and UK have differing plans

The US and Europe appear to have different plans as to how to deal with the situation in the Persian Gulf. The United States has said that it envisages a scheme whereby nations would protect ships that carry their own flag, but that joint operations would be designed to carry out surveillance on waterways, while the British plan, according to former British foreign secretary Jeremy Hunt is a Europe-led plan “to support safe passage of both crew and cargo in this vital region.” Speaking to British lawmakers Monday, Hunt said the plan is different from the U.S. proposal. “It will not be part of the U.S. maximum-pressure policy on Iran because we remain committed to preserving the Iran nuclear agreement,” he said. If the UK and US are to find a solution with Iran, they have to resolve their difference and define a certain course of action. Contacts between the US and UK continue on the issue, however, so the differences can be expected to be resolved in the coming days.