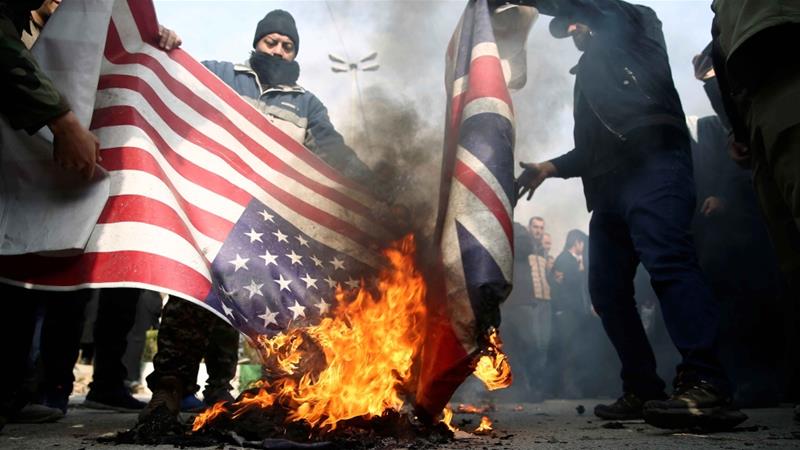 Demonstrators burn American and British flags during a protest against the assassination of the Iranian Major-General Qassem Soleimani in Tehran on January 3, 2020 [WANA via Reuters]

Demonstrators burn American and British flags during a protest against the assassination of the Iranian Major-General Qassem Soleimani in Tehran on January 3, 2020 [WANA via Reuters]

Iran has stepped up its fight for influence in Iraq in recent years, which has been one of the main factors stimulating the recent protests and unrest across the country, with people calling for an end to corruption and foreign Iranian influence and meddling in Iraqi politics.

The protesters at several occasions expressed their anger and rejection to Iran’s stance regarding the Iraqi protests. They burned the photo of Qasem Soleimani, the commander of the Revolutionary Guards’ Quds Forces. They also burned the Iranian consulates in Najaf and Basra as well as offices of political parties allied with Iran in central and southern Iraq.

Following the U.S. invasion of Iraq in 2003, the Iranian influence has expanded in the country through intervention in the formation of political parties, and supporting militia groups. Iran has long been accused of running a network of proxies across the Middle East, using Shiite militias and political parties to undermine rival governments.

The battle against the Islamic State in Iraq has helped the Iranian proxies gain even more influence in Iraqi politics, as Shiite militias gained almost a third of the seats in Iraq’s parliament in 2018 elections. Regardless, the Iraqi government continues to strengthen its ties with Iran, like last week, Iraqi President said that the development of bilateral relations in all fields should include the common benefits of the Iraqi and Iranian nations.

US embassy attack signifies heat of US-Iran conflict in Iran

Since the fight against ISIL began in Iraq, the US has maintained a strong presence in Iraq and has looked to re-establish its influence. This has been hard, however, as they face strong opposition from Iran, and recent events have signified the heart of this conflict.

In a sign of heightened tensions between the 2 powers, Dramatic scenes unfolded at the U.S. Embassy in Iraq on Tuesday. Iraqi militiamen and their supporters stormed into a perimeter gatehouse, then set fires, threw stones and chanted “Death to America!”

This was a culmination of the high tensions caused by the recent violent acts committed by both sides against each other. U.S. officials have said that for months Iraqi militias backed by Iran have been firing rockets into Iraqi military bases where some U.S. troops and contractors are also stationed. On Friday, a rocket attack killed a U.S. contractor. The U.S. responded with airstrikes on five compounds in Syria and Iraq belonging to a group it blames for the rocket attack. It is an Iranian-backed militia called Kataib Hezbollah, meaning Hezbollah Brigades. The militia says at least 25 of its fighters died.

The Iraqi government said it will reconsider its relationship with the U.S.-led coalition the first time it has said it will do so since an agreement was struck to keep some U.S. troops in the country. It called the attack a “flagrant violation” of its sovereignty.

After funeral processions, Tuesday in Baghdad, the militia and its supporters marched into the fortified Green Zone to the walls of the embassy, where they attacked the embassy but failed to break in.

Tensions are visibly high between the US and Iran and it appears that Iran is currently in a much stronger position in Iraq, with the government moving further away from the US by the day, and threatening the US’s presence in Iraq.

The US losing patience with the Iraqi government

The US has realized it is losing its grip on Iraq, and the Iraqi government is growing more and more distant from it by the day. Recent events have highlighted this and the US’s frustration with the administration.

The recent U.S. airstrikes against an Iranian-backed militia group were reportedly the direct result of the Baghdad government’s failure to act against repeated attacks on American bases in Iraq, U.S. officials said Monday.

In unusually harsh wording aimed at an ally in the fight against the Islamic State, three top State Department officials, speaking on background in a briefing to reporters, said the U.S. had no choice but to hit back at the Kata’ib Hezbollah (KH) militia when Iraq’s security forces took no action following at least 11 attacks on U.S. bases in the last two months. “We have warned the Iraqi government many times and we’ve shared information with them to try to work with them to carry out their responsibility to protect us as their invited guests,” one official said.

While some may believe this could be the start of another US withdrawal from Iraq due to the lost faith in cooperation with the Iraqi army, it appears that the opposite is true, with Donald Trump deciding to send additional troops to Iraq in response to recent events.

Defense Secretary Mark Esper said Tuesday. “[The] soldiers will deploy to the region immediately & additional forces from the [Immediate Response Force] are prepared to deploy over the next several days. This deployment is an appropriate and precautionary action taken in response to increased threat levels against U.S. personnel and facilities, such as we witnessed in Baghdad today. The United States will protect our people and interests anywhere they are found around the world.”

The US is not backing down in Iraq and is strengthening its presence in order to counter the uncertainty surrounding the Iraqi army, as well as Iran’s strengthened influence in the nation, however it may be too late for the US.