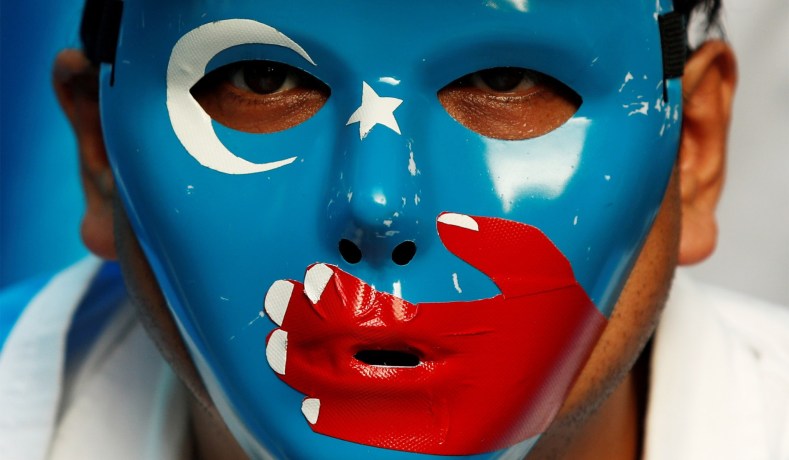 A Chinese Uyghur Muslim participates in an anti-China protest during the G20 leaders summit in Osaka, Japan, June 28, 2019. (Jorge Silva/Reuters)

A Chinese Uyghur Muslim participates in an anti-China protest during the G20 leaders summit in Osaka, Japan, June 28, 2019. (Jorge Silva/Reuters)

Not only is there widespread international support for China’s treatment of the Uyghur population, but countries are officially signing letters of support. More than 30 countries have signed a letter defending China’s treatment of Uighur Muslims in the Xinjiang region in response to Western criticism, as well as praising China’s “contribution to the international human rights cause” in the letter sent to the UN’s Human Rights Council on Friday.

Among the countries that signed, are prominently Muslim-majority countries, Pakistan, Saudi Arabia, Algeria, Bahrain, Egypt, UAE and Kuwait. Many countries from central and West Africa also signed, including Nigeria and Congo, as well as several countries from South America, including Cuba and Bolivia.

For many, China’s economic heft is a primary concern when deciding to rebuke Beijing so publicly. For other states, such as Russia, Saudi Arabia, and North Korea, their own human rights records at home have come under frequent attack abroad and so defending China becomes a roundabout way of defending themselves.

The first letter signed, however, was in a bid against China’s treatment of Uyghurs in Xinjiang, including their placement in concentration camps. 22 countries signed this letter, mostly from Europe, notably the UK, France and Germany, as well as Japan, Australia, Canada and New Zealand. In a letter to the United Nations High Commissioner for Human Rights, Michelle Bachelet, the group of 22 nations urged China to end its “mass arbitrary detentions and related violations” and called on Beijing to allow UN experts to access the region.

3. Countries that don’t want to take a side

Then there are the countries that don’t appear on either list. The absence of the United States, which left the UN Human Rights Council surprised last summer is particularly important. While the United States has been selectively critical of China’s Xinjiang policies, the Trump administration appears unwilling to push too far overall, prioritising trade negotiations over human rights criticisms.

Furthermore, despite previously criticising the camps, Turkey did not appear among the signatories. In early July, after a visit to Beijing, Turkish President Recep Erdogan said that the Xinjiang camp issue shouldn’t be “exploited. Another noticeable point is the absence of most of Central and Eastern Europe.

For example, of the countries in the so-called 16+1, a format bringing together in routine dialogue the states of Central and Eastern Europe (CEE) and China only Estonia, Latvia, and Lithuania stood up to criticise China. The rest, Albania, Bosnia and Herzegovina, Bulgaria, Croatia, the Czech Republic, Hungary, Macedonia, Montenegro, Poland, Romania, Serbia, Slovakia, and Slovenia, neglected to pick a side. There is always a possibility that these nations will choose a side eventually, which could change the balance.

4. Why worldwide reactions have been slow to the Uyghur detention

The world has been slow to react to the Uyghur situation in China, as even the letter against it signed by the 22 nations came a long time after the story first broke out. Nury Turkel, chairman of the Uyghur Human Rights Project in Washington, has shed some light on the probable reasons for this delay. Turkel said: “It has been taking a surprisingly long time. There are a couple of reasons: one is obviously the China factor. It’s a big country, kind of a reckless country, governments are often very careful to take a stand.”

James Leibold, an associate professor in politics and Asian studies agrees with him saying that China’s economic clout and other countries’ reluctance to rock the trade boat is clearly a factor.  Another reason presented is the remoteness of the Uyghur camps’ location, making it harder to release details, as well as China’s restriction on foreign journalists, which only confirms nations’ worries of mistreatment of the Uyghurs in the camps.

Beijing has continued to deny any allegations of torture or political indoctrination, and says the camps are “vocational training centers” designed to fight terrorism and combat Islamic extremism, and has recently stepped up its defence of the system in a government report, saying that Xinjiang is an “inseparable part” of China, and internal and external hostile forces including separatists, religious extremists and terrorists are distorting history and facts to split the country apart, adding that “Having a stronger sense of identity with Chinese culture is essential to the prosperity and development of ethnic cultures in Xinjiang.” The widespread international support of China’s actions will certainly reassure Beijing that they will not be halting the placement of the Uighur population in camps any time soon.