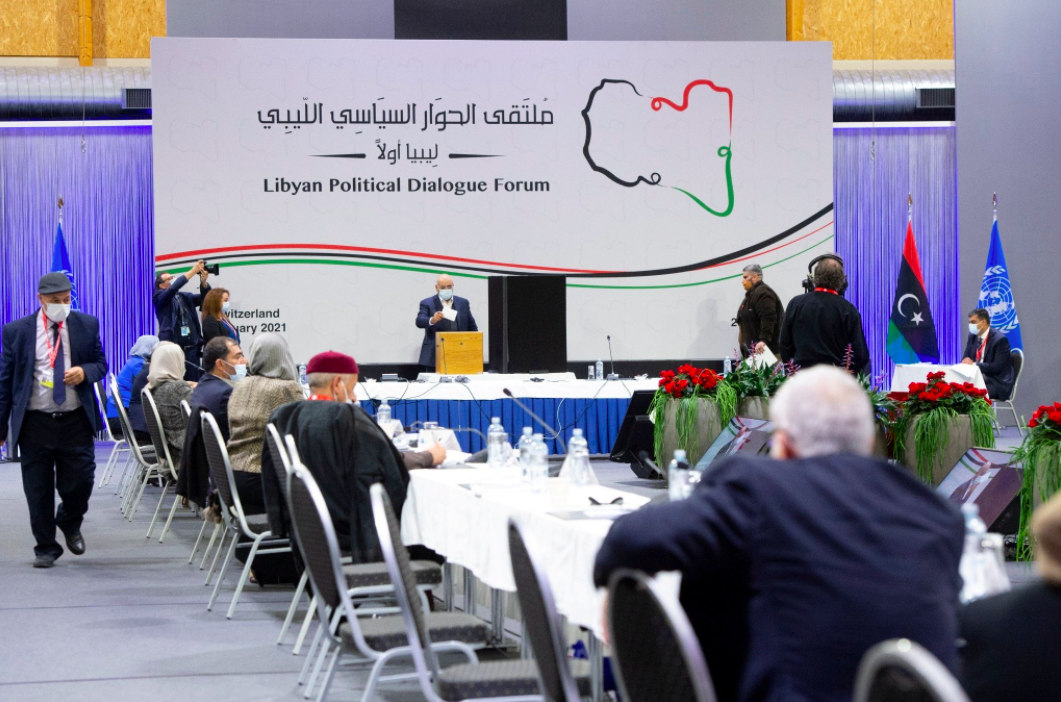 UN-sponsored talks in Geneva have produced a new interim government for Libya, which aims to hold national elections later this year. It is the first time the country has had a unified leadership in four years.

On Friday, the 75-strong Libyan dialogue forum elected Abdul Hamid Dbeibah as prime minister, and Mohamed al-Manfi from the east as the head of a three-strong presidential council. Musa al-Koni, as the deputy representing the country’s south, and Abdullah al-Lafi complete the council.

The aim has been to ensure the three regions of Libya are represented in the government in the run-up to the elections. The election of a unified administration aims at ending a division in Libya that has lasted for more than five years, with two rival governments, and their affiliated armed groups, running different parts of the North African country.

Seventy-four members of the Libyan Political Dialogue Forum (LPDF), which includes Libyans from different political backgrounds, elected a list that includes the prime minister and the head of the Presidential Council.

“On behalf of the United Nations I am pleased to witness this historic moment,” said UN acting Libya envoy Stephanie Williams, who was interrupted by applause.

The winning list got 39 votes, which is more than the required 50 percent plus one of the 73 valid votes. One voter abstained.

None of the four slates – each including a candidate for prime minister and three for a presidency council – secured the 60 percent threshold of votes needed to win outright in the first ballot.

The two slates with the most votes went to a runoff vote.

Almost all candidates committed to holding the elections on time and vowed to work on national reconciliation and help displaced Libyans get back to their homes. Addressing the LPDF earlier this week, Dbeibeh said he wanted to focus on uniting and restructuring the country’s military and set up a ministry for national reconciliation and reparation.

Recognition and support of the new interim government has come in from most external powers involved in the conflict, from both sides. Turkey has hailed the announcement of Libya’s transitional unity government. Ankara said “the opportunity” provided by the decision would help ensure “the territorial integrity and the political unity” of Libya. Turkey has deployed troops in Libya under a military accord signed with the GNA which the Ankara parliament extended for 18 months in December.

“We are delighted with the appointment of a prime minister and a presidential council following the elections carried out through the inter-Libyan dialogue,” the Turkish foreign ministry said in a statement.

“Turkey will continue to offer the new executive its support for the holding of elections scheduled for the end of the year… and for the restoration of security in Libya,” the statement added.

In addition to this, Libya’s new Prime Minister Abdul Hamid Dbeibeh has described Turkey as a “friend and ally”, saying his government will strive to achieve peace in his war-torn country and Ankara can help achieve those goals.

“We maintain great solidarity with the Turkish state and people,” Dbeibeh told Anadolu Agency in his first interview after being elected to lead an interim government.

“Turkey is an ally, friend, and a brotherly state, and it has huge capabilities to help the Libyans achieve their real goals. Turkey is considered a real partner [in] Libya,” he said.

“Turkey was the only country that the Libyans could freely travel to during the war. Turkey has kept its airports open to the Libyans and did not close its embassy in [capital] Tripoli.”

Dbeibeh said the freedom of movement will reflect positively on economic cooperation between both countries.

Meanwhile, Egypt has also welcomed the formation of the new Libyan executive authority and expressed its aspiration to work with the interim body. A spokesman for the Egyptian Ministry of Foreign Affairs, Ahmed Hafez, said that Cairo hailed the results of the vote determining the executive authority by the Libyan Political Dialogue Forum held in Geneva under the auspices of the UN. Cairo looked forward to working with the Libyan interim authority until the handover of power to the elected government after the poll scheduled for December this year, he said.

The UAE also joined the group of Arab countries that welcomed the formation of the New Libyan Executive Authority, expressing hope that this step would bring security, stability, and development to Libya. The UAE Ministry of Foreign Affairs and International Cooperation (MoFAIC) praised in a statement efforts by the United Nations to form a new executive authority, stressing the UAE’s full cooperation with the new authority in order to achieve security, stability, prosperity, and the aspirations of the brotherly Libyan people.

It is clear that many of the countries involved in Libya have realized that the only way they can develop their economic and geopolitical interests with Libya is through diplomatic means, so they have accepted the UN-led mission, which will be fundamental to helping ensure the success of the interim government. However, several obstacles remain, which will be discussed in the next section.

Within Libya, there is a mixture of cynicism and hope that the country may be able to put years of sporadic fighting and divided institutions behind it. A fragile ceasefire has held since October, but the country remains full of mercenaries and armed militia.

In a sign that some of the losers may accept their fate, Fathi Bashagha, the interior minister from the west of Libya who had been widely tipped for the post of prime minister, congratulated the victors.

Bashagha, who is close to the Muslim Brotherhood and from the coastal town of Misrata, had worked hard to garner international support, but teamed up for the leadership with Aguila Saleh from the east of the country.

The former UK ambassador to Libya Peter Millett said: “This is not the result most observers were expecting. The combination of Aguila Saleh as head of the presidency council and Fathi Bashagha as prime minister was the frontrunner and had the backing of key external players such as Egypt.

“The Dbeibah family are controversial and have been involved in accusations of corruption. There are already voices in the east calling for war. Haftar’s intentions are also unclear. The crucial thing now is for this transitional government to be endorsed, both domestically and internationally.”

There is therefore a significant internal threat to the current interim government, that could be dangerous.

The head of the new government faces many potential pitfalls. He must first present his new government and work programme within 21 days for the approval to the House of Representatives, Libya’s parliament.

If it is rejected the issue returns to the dialogue forum, a body mainly handpicked by Williams. There are also doubts as to whether the ceasefire will hold, let alone foreign troops leave the country.

Furthermore, some Libyans have been critical of a process that they view as being managed from abroad and that they fear will allow existing power-mongers to cling to their influence.

“War and tension will come back sooner or later so long as the armed groups have power,” said Abdulatif al-Zorgani, a 45-year old state employee in Tripoli.

The latest UN process emerged from a Berlin conference last year and gathered pace in the autumn after renegade military commander Khalifa Haftar’s eastern-based forces were repelled from a 14-month assault on Tripoli.

It has also involved a military ceasefire but not all its terms have been met a sign of continued mistrust on both sides and internal fractures within both camps.

Therefore, although the election of a new interim government is certainly a positive sign for the prospective elections this year, there is still a lot of work to be done for this government to maintain its legitimacy, and peace until the proposed election date. Widespread external support for the interim government from most of the powers involved in Libya will however increase the chances of the government overcoming these internal roadblocks.