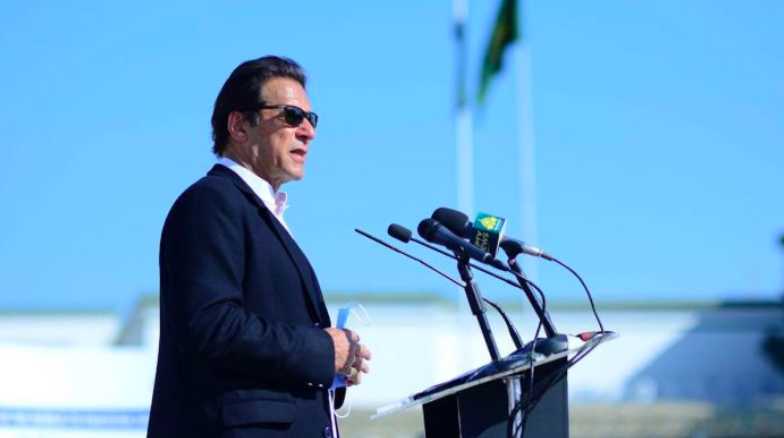 India and Pakistan issued a joint statement saying both sides have agreed to stop firing along their disputed border in Kashmir starting Thursday.

The director generals of military operations for the two countries held discussions where they reviewed the situation along the Line of Control – the de facto border between the Indian and Pakistani parts of Kashmir – in a “free, frank and cordial atmosphere,” according to the statement posted by India.

“In the interest of achieving mutually beneficial and sustainable peace along the borders, the two (director generals) agreed to address each other’s core issues and concerns which have propensity to disturb peace and lead to violence,” the statement read. It added that both sides will utilize existing mechanisms including a hotline to resolve tensions and misunderstandings.

Kashmir has always been a contentious issue for the two nuclear-armed rivals. Pakistan and India both lay claim to the full area but control only parts of it.

They have fought multiple wars over the mountainous region. In 2019, tensions escalated when both countries carried out retaliatory airstrikes against one another, prompting worries of a war breaking out in South Asia.

India and Pakistan said on Thursday they have agreed to “strict observance of all agreements, understandings and cease firing along the Line of Control (LoC) and all other sectors” with effect from midnight of February 24/25.

This was agreed between the Director Generals of Military Operations (DGMO) of both countries during discussions over the established hotline, the joint statement said.

“In the interest of achieving mutually beneficial and sustainable peace along the borders, the two DGsMO agreed to address each other’s core issues and concerns which have propensity to disturb peace and lead to violence,” the joint statement said.

This is the first publicised contact in a long time between India and Pakistan. The last meeting between the Prime Ministers of the two countries was on Christmas Day in 2015 when Prime Minister Narendra Modi visited Lahore on an unannounced visit.

In another sign of reconciliation, Pakistan Prime Minister Imran Khan said on Wednesday that Kashmir is the only dispute with India and it can only be resolved through dialogue.

Addressing the Sri Lanka-Pakistan Trade and Investment Conference which he co-chaired with his counterpart Mahinda Rajapaksa in Colombo, Khan said that he offered India an opportunity to hold peace talks on being elected as prime minister in 2018 but nothing came to pass.

“Our only dispute is Kashmir and it can only be resolved through dialogue,” he said.

Earlier this month, India said it desires normal neighbourly relations with Pakistan in an environment free of terror, hostility and violence.

“Immediately when I came into power, I approached our neighbour India and explained to Prime Minister Narendra Modi that the way forward for the subcontinent is to resolve our differences through dialogue,” Khan said.

“I didn’t succeed but I am optimistic that eventually sense will prevail. The only way the subcontinent can tackle poverty is by improving trade relations,” he added.

Furthermore, India had allowed Pakistan Prime Minister Imran Khan‘s aircraft to fly over its airspace to travel to Sri Lanka, showing signs of goodwill from both sides.

Despite the positive signs, deep-rooted tensions clearly remain between the two Asian powers.

India on Wednesday hit out at Pakistan at the High Level Segment of the 46th Session of the Human Rights Council and said the recent release of Al-Qaeda terrorist Ahmed Omar Saeed Sheikh is a “clear example” of the connection between the Pakistani state and terrorists. Responding to the comments of Pakistan and Turkey on Kashmir and other issues, the Indian diplomatic team said the government of India is “fully cognizant” of its human rights obligations.

“Pakistan has been the home and patron to the largest number of internationally proscribed terrorist entities and individuals in the world. …The recent acquittal of Omar Saeed Sheikh, al-Qaeda terrorist and murderer of American journalist Daniel Pearl by the Pakistani Supreme Court, is a clear example of the Pakistani establishment’s nexus with such entities and, as the U.S. Secretary of State said, ‘It is an affront to terrorism victims everywhere’,” said diplomat Seema Pujani after the Pakistani delegation raised the Kashmir issue and described the situation in the Valley as ‘grave’.

New Delhi’s response to the criticism by Pakistani human rights minister Shireen Mazari in her address to the UN body in Geneva also described Pakistan as a country with “one of the world’s worst human rights records”, where “institutionalised discrimination and persecution” of minorities has continued unabated.

In addition to this, the Pakistani army on Wednesday said it is investigating reports of pro-India malware spying.

Talking to foreign media reporters at military headquarters in Rawalpindi, near the capital Islamabad, spokesman Maj. Gen. Babar Iftikhar said the military is investigating reports about malicious cyberattack “carried out by India,” without sharing any further details.

On Feb. 10, the US-based cybersecurity company Lookout reported that two malware programs on an Android-based platform that emerged in India have been spying on the Pakistani military.

In a statement, Lookout said it has discovered the malware Hornbill and SunBird used by a cyber group named Confucius that first appeared in 2013 as “a state-sponsored, pro-India actor primarily pursuing Pakistani and other South Asian targets.”

“Targets of these tools include personnel linked to Pakistan’s military, nuclear authorities, and Indian election officials in Kashmir,” the statement said.

“Hornbill and SunBird have sophisticated capabilities to exfiltrate SMS [short message service], encrypted messaging app content, and geolocation, among other types of sensitive information,” it added.

If India and Pakistan are to pursue dialogue at least on the issue of Kashmir, they need to first come to the table and discuss the latest accusations launched from both sides, which remains unlikely.