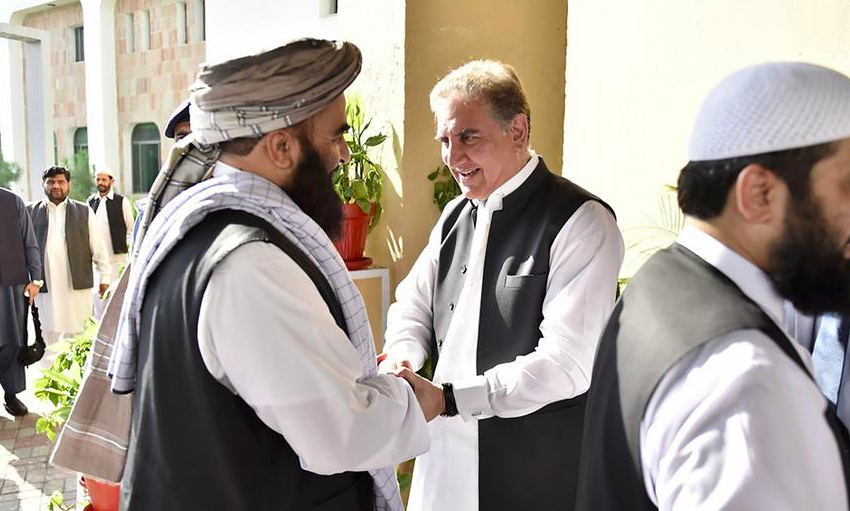 Videos of Pakistani citizens holding Taliban flags and chanting slogans at rallies to show support for the Afghan insurgents have been circulating on social media. This comes amid rapid Taliban advances in Afghanistan ahead of the complete withdrawal of US troops by September.

Islamic clerics in various parts of the country are also soliciting support for the Afghan Taliban and calling for donations.

Many locals and witnesses in the city of Quetta and district of Pishin of Balochistan province told DW that there had been an increased pro-Taliban activity in their areas.

“The Taliban enjoy local support in our area, but the rallies are not possible without support from state authorities,” a resident told DW on condition of anonymity. “Initially, the clerics were asking for donations for the Afghan Taliban at mosques; now they are coming door-to-door to generate funds for the ‘Afghan jihad,'” he said.

Mohsin Dawar, a progressive opposition lawmaker from Pakistan’s northwestern tribal areas, said that “the Taliban continue to roam freely in different parts of Pakistan, including Quetta.”

“It is not possible without the state’s support,” he said.

Government officials say the reports about pro-Taliban rallies and donations are unfounded. “The allegations are baseless. No such thing is happening,” Zahid Hafeez Chuadhary, a spokesman for Pakistan’s Foreign Ministry, told DW.

The Tehrik-i-Taliban Pakistan (TTP) is officially banned in the country, but some say Islamabad’s alleged support to the Afghan Taliban is giving impetus to the outfit.

Taliban gains in Afghanistan are also encouraging Pakistani Islamists to join their ranks in the war-ravaged country. According to local sources, dozens of Pakistanis have been killed in Afghanistan in the past few months while fighting alongside the Taliban against Afghan forces.

Analysts say Pakistani authorities have not taken any action to stop their movement. Social media posts have shown announcements and advertisements for their memorial services, as their dead bodies return to their hometowns.

Hundreds of people have attended the funerals of the Pakistani fighters in various parts of the northwestern Khyber Pakhtunkhawa and the southwestern Balochistan provinces.

Many Afghan and Western officials accuse Islamabad of providing safe havens and military support to the Taliban.

The Taliban’s rapid victories in neighboring Afghanistan have once again highlighted deep divisions within Pakistan, where some are celebrating the hard-line Islamists’ expanding territorial control while others warn of increasing homegrown violence and extremism.

The public rift heralds a future wherein the Taliban’s possible return to power and the gloating of Pakistani supporters are stoking fears of a subsequent rise in extremism. Many in Pakistan blame its own rulers and terrorist groups for bringing the Afghan war into their country, killing tens of thousands and forcing millions more into displacement.

“The Taliban is acting like a protective barrier for Pakistan [in Afghanistan],” lawmaker Mufti Abdul Shakoor, a leader of the Jamiat Ulam-e Islam (JUI) political party, told the parliament in a heated speech on July 12. “The Afghan Taliban is making sacrifices for defending Pakistan,” he added as he apparently toed an old line of the country’s security establishment.

The Pakistani military has used the various phases of the Afghan conflict since the early 1980s as a means tofend off possible threats from secular Afghan nationalist regimes who have championed irredentist claims.

Shakoor, a turbaned Pashtun cleric from the northwestern province of Khyber Pakhtunkhwa on Afghanistan’s border, alleged that agents of India’s Research and Analysis Wing and Afghanistan’s Directorate of National Security intelligence agencies were responsible for sending terrorists into Pakistan who killed more than 70,000 people.

“I want to say it out loudly: The Taliban practically controls Afghanistan now because it is popular among the people,” he said. “Who else would have defeated America only with the force of arms?”

He urged Islamabad not to oppose a possible Taliban takeover of Afghanistan. “Even if we cannot support them, we should not oppose them because it equals enmity with Pakistan,” Shakoor noted.

But most secular and moderate Pakistanis take a diametrically opposite view.

“It is wrong to claim we don’t have any favorites in Afghanistan. Our only favorite in Afghanistan is the Taliban,” lawmaker Mohsin Dawar, a leader of the Pashtun Tahafuz (Protection) Movement, told lawmakers on July 12 prior to Shakoor’s pro-Taliban speech. “[Supporting the Taliban] is equal to invading our neighboring country and supporting those terrorists who are fighting the state there.”

During the past two decades, parts of Pakistan became an extension of the Afghan battlefield as U.S. drones hunted Taliban and Al-Qaeda leaders and large-scale Pakistani military offensives prompted mass displacement.

A key crossing between Pakistan and Afghanistan partially reopened on Saturday, days after the Taliban took control of the Afghan border town in a rapid offensive across the country.

Pakistan shut off the border when the militants captured Spin Boldak from Afghan government forces on Wednesday, leaving thousands of people stranded on either side and trade at a standstill.

A Pakistani border official, who did not want to be named, told AFP that people were being allowed to enter Pakistan in small groups, while hundreds were heading into Afghanistan.

An AFP journalist witnessed people crossing in both directions.

“We have decided to let them cross over to Pakistan… after checking their travel documents, enabling them to join their families on Eid (al-Adha),” the border official said, referring to the Muslim holiday which will be celebrated next week.

Pakistani Noor Ali, who had been visiting Kabul, said it took him two attempts to reach Spin Boldak in recent days because of fighting in Kandahar province, on the border.

“I was scared, but the Taliban did not create any problems, they checked my documents and allowed me to go through,” he told AFP after arriving in the nearby city of Quetta.

The Taliban’s seizure of the border town follows weeks of intensifying clashes across Afghanistan, with the insurgents capitalising on the last stages of the US troop withdrawal to launch a series of lightning offensives, overrunning districts at a staggering rate.

The group have also taken other vital border crossings with neighbouring countries in the north and west.

The Pakistani army had forced the TTP fighters to retreat, but they are now feeling emboldened by the changing dynamics in Afghanistan. Since the start of the year, the TTP has claimed 32 attacks inside Pakistan.

Moeed Yusuf, Pakistan’s national security adviser, said last week that the security situation in Afghanistan was “extremely bad and out of Pakistan’s control.”

Major General Babar Iftikhar, the spokesman for the Pakistan army, on Saturday warned that the possible civil war in Afghanistan could spill over to Pakistan.

“We were aware [of the situation] and have taken several measures to deal with it. ‘Islamic State’ (IS), the TTP and their affiliates are using their bases in Afghanistan to plan and initiate attacks on Pakistan’s armed forces,” he said.

But Zabiullah Mujahid, an Afghan Taliban spokesperson, told DW that the insurgents “will not allow any group to use Afghan soil to initiate attacks on other countries.”

“We have no link with the TTP. We won’t be part of any plans to target other countries, as it will damage our credibility.”

Pakistan has long been accused of aiding the Taliban against President Ghani’s government. Experts say the main reason behind this support is to counter India’s clout in Afghanistan. With the departure of NATO troops, Islamabad hopes to regain the influence it lost in Afghanistan after the fall of the Taliban regime in 2001.

Islamabad played a vital role in the US-Taliban negotiations, which resulted in a deal between the two parties in February 2020. But it hoped that the deal would pave the way for a power-sharing agreement between different stakeholders in Afghanistan. That hasn’t happened, and with the abrupt announcement of  the complete and unconditional departure of troops from Afghanistan by US President Joe Biden, it now looks almost impossible.

With the departure of NATO troops and Taliban advances in the country, a civil war in Afghanistan seems more likely than ever. Ahmed Rashid, a prominent Afghanistan expert, told DW in an interviewthat the chaotic situation in Afghanistan “can suck in the neighboring countries.”

“If that happens, that will be the end of Afghanistan,” he said.

He also said the Taliban would not engage in a dialogue with Ghani’s government “as long as the Pakistani military and intelligence continue to give them sanctuary.”

Pakistan Prime Minister Imran Khan defended Friday his government’s efforts to promote a negotiated settlement to the conflict in Afghanistan, rebutting allegations that Islamabad was backing the Taliban’s violent insurgency to fuel hostilities in the neighboring country.

Khan spoke at an international regional connectivity conference hosted by Uzbekistan, shortly after Afghan President Ashraf Ghani addressed the event and accused Pakistan of “playing a negative” role in the war.

The Afghan leader said that “intelligence estimates indicate the influx of over 10,000 jihadi fighters from Pakistan and other places in the last month.” Ghani went on to allege that despite pledges and assurances, Khan’s government had failed to influence the Taliban to “negotiate seriously” to find an end to the Afghan war.

Khan responded by saying he was “disappointed” by the Afghan president’s “extremely unfair” allegations, insisting that Pakistan had suffered 70,000 casualties in the last 15 years in its own battle against terrorism and that its fragile national economic progress could ill afford a prolonged instability in the immediate neighborhood.

“President Ghani, let me just say that the country that is going to be most affected by turmoil in Afghanistan is Pakistan,” he said. “The last thing Pakistan wants is more conflict … and turbulence in Afghanistan.”

The prime minister stressed that “no country has tried harder” to bring the Taliban to the dialogue table than Pakistan. “Short of taking military action against Taliban [leaders living] in Pakistan, we have made every effort to get them [to] the dialogue table and to have peaceful settlement there.”

There is no definitive answer to the question of how Pakistan intends to deal with the Taliban, but current signs are pointing to a path of mediation and negotiations with the Taliban, with which it has ties, while also preparing to secure their border from a possible Taliban offensive.