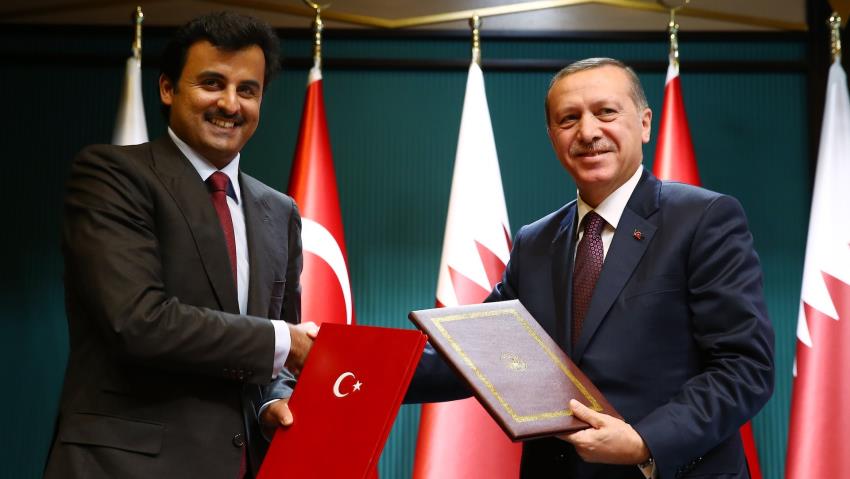 Turkey and Qatar have built a very strong relationship that can be labelled an alliance in the last couple of years. An alliance which is sourced in the two countries’ common fear of being isolated by surrounding nations, hence the catalyst being the 2017 Qatar blockade, during which Turkey sent Qatar supplies, kicking off a high volume of trade and cooperation between the nation.

The previous year, when hundreds of people were killed in a failed coup in Turkey, the Qatari emir was the first world leader to call Erdogan and express support to his government. Most recently, Turkish President Recep Tayyip Erdogan arrived in Qatar on Monday to meet Emir Sheikh Tamim bin Hamad Al Thani on an official visit to discuss regional issues and bilateral relations.

According to data from the state-run Turkish Statistical Institute, Turkey’s exports to Qatar reached $1.1bn in 2018, an increase of 69 per cent compared with $650m the previous year. During the same period, Qatar’s exports to Turkey jumped 27 per cent, from $264m to $335m. The overall trade volume stood at $1.44bn in 2018 and is projected to rise further this year.

Trade relations between Qatar and Turkey have seen a significant development over the past few years, with total trade volume between both countries registering a remarkable 85 per cent growth from QR4.7bn in 2017 to QR8.7bn in 2018, Qatar Chamber Board Member Dr Mohamed Jawhar Al Mohamed has said while addressing the Qatar-Turkey Law & Investment Forum which opened in Istanbul last week.

The two countries have also strengthened military ties, with Turkey maintaining a military base in Qatar since 2015 – and the two sides’ armies carrying out joint military drills in recent years. The latest visit of Erdogan to Qatar shows the strength of the relationship, as well as the willingness to continue this trend.

A strong yet fragile relationship

Despite the strong relationship that was built between Turkey and Qatar over the last few years, many believe that the foundation on which the relationship was built is weak and susceptible to change. Both nations were economically and geopolitically isolated in certain periods, and that can change, with either nation-building strategic ties with a surrounding nation a viable possibility.

The close ties between Turkey and Qatar in recent years have been borne more out of necessity than ideological affinity and will likely erode once Doha is able to end the standoff with its Gulf neighbours, which may happen in the next year.   In the past year, some analysts have argued that the Qatar-Turkey alliance has added a third member, Iran, mainly because all three have a common foe, Saudi Arabia.

This shows the circumstantial nature of the ties. In fact, there are already signs of cracks in the fragile relationship, as last week, relations between Turkey and Qatar came under assault in Turkey’s pro-government media, which slammed Qatar’s Al Jazeera English for its negative coverage of Ankara’s offensive in northeast Syria. It appears that despite the current strength of the alliance, Turkey and Qatar can very well part ways in the next years in the case of a geopolitical shift in the region.

Is Turkey using Qatar for strategic interests in the Gulf?

Another reason why the argument made in point 2 may be valid, is Turkey’s geopolitical approach in recent years. Under Erdogan, Turkey has worked to establish itself as a regional superpower, through similar tactics that the US and Russia commonly use, direct and indirect military pressure, with the main example of this being the recent operation in Syria against the YPG, and Turkey’s earlier push to secure a section of Northern Syria from ISIL using Syrian rebel forces to do so.

Turkey’s establishment of a military presence in Qatar, may hence also signify a strategic push for a geopolitical position in the gulf. This month, a new Turkish military base is to be inaugurated in Qatar by the leaders of the two countries, Turkish President Recep Tayyip Erdoğan and Qatari Emir Tamim bin Hamad Al Thani.

This is the second Turkish base to be built in Qatar; the first, in the Al-Rayyan area, was opened in 2015. Regardless of the number of troops they currently house, these bases are of immense strategic importance. Qatar holds the world’s third-largest natural gas reserves, thus Turkey’s military presence in Qatar enables it to become a major player in the global energy market and also to advance its own economy in various ways.

Qatar’s arms deal with Turkey’s military industry and its investments in this industry likewise enrich Turkey’s coffers. This adds another layer to the circumstantial relationship that Turkey is using to its own advantage, which could either succeed or backfire, based on the fragility of relations.