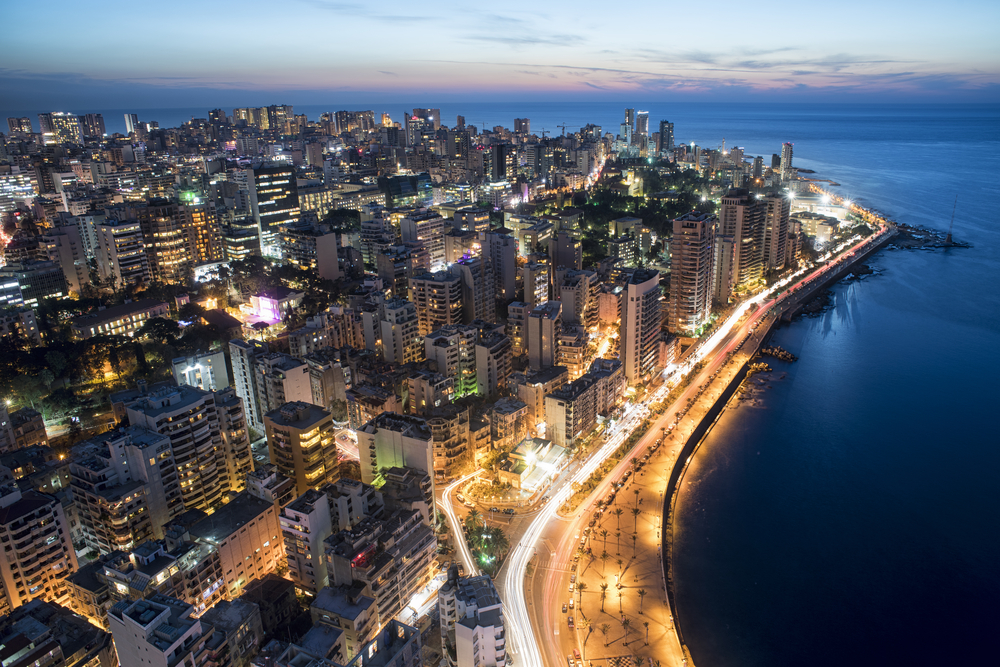 Over 3 weeks ago, a huge explosion devastated the port area of the capital Beirut on. The blast killed at least 100 people and injured more than 4,000 others.

The whole city was shaken by the explosion and a mushroom cloud could be seen spreading over the port area. The blast sent an enormous orange fireball into the sky, immediately followed by a tornado-like shockwave that flattened the port and swept the city, shattering windows kilometres (miles) away. President Michel Aoun said the blast was caused by 2,750 tonnes of ammonium nitrate stored unsafely in a warehouse. Ammonium nitrate is used as a fertiliser in agriculture and as an explosive. The blast was also felt 240km (150 miles) away on the island of Cyprus, in the eastern Mediterranean, with people there saying they thought it was an earthquake.

In the explosion’s devastating aftermath, many Lebanese are expressing immense shock and sadness at the destruction, and great anger towards those who allowed this to happen. Analysis of public records and documents published online show senior Lebanese officials knew for more than six years that the ammonium nitrate was stored in Hangar 12 of Beirut’s port.

The cargo of ammonium nitrate arrived in Lebanon in September 2013, onboard a Russian-owned cargo vessel flying a Moldovan Flag. The Rhosus, according to information from the ship-tracking site, Fleetmon, was heading from Georgia to Mozambique. It was forced to dock in Beirut after facing technical problems at sea, according to (PDF) lawyers representing the boat’s crew. But Lebanese officials prevented the vessel from sailing, and eventually, it was abandoned by its owners and crew – information partially corroborated by Fleetmon. The ship’s dangerous cargo was then offloaded and placed in Hangar 12 of Beirut port, a large grey structure facing the country’s main north-south highway at the main entrance to the capital. Since then, customs officials have written several letters to judges calling for the removal of the substance due to its danger. They proposed three options: Export the ammonium nitrate, hand it over to the Lebanese Army, or sell it to the privately-owned Lebanese Explosives Company. However, no reply was ever received, and the ammonium nitrate remained on the port until yesterday.

“What happened today will not pass without accountability,” said Diab. “Those responsible for this catastrophe will pay the price.”

The explosion comes at a sensitive time for Lebanon. With Covid-19 infections on the rise, hospitals were already struggling to cope.

Lebanon is one of the world’s most indebted countries and is spiralling into poverty and political chaos after decades of economic mismanagement. Its government is seeking a $10 billion bailout package from the International Monetary Fund (IMF), but the IMF insists that Lebanon must first reform its bloated and corrupt public sector. So far, Beirut’s power brokers have resisted. While coronavirus lockdowns have exacerbated Lebanon’s economic woes, the country’s financial crisis has been deepening for decades. Lebanon’s byzantine sectarian power-sharing system has brought the government to a standstill, while years of pocket-lining by politicians has crashed the economy and sent standards of living into freefall. (Even before the pandemic, the World Bank predicted that 50 percent of Lebanese could be living below the poverty line if economic trends continued.)

Last year, Lebanon plunged into a state of unrest and virtually shut down after nation-wide protests erupted calling for the government to step down. The tension had been building for months as the government searched for new ways to levy taxes to manage the country’s economic crisis and soaring debt.

It is, therefore, a very tough task for Lebanon to recover from this blast, and we will see how they have recovered so far.

Lebanon’s recovery since the blast

Since the blast, there has been a soar of international support in the form of aid in repairing port facilities, looking for missing people, food, supplies and economic aid. This ofcourse was much needed.

In addition to this, Lebanon’s second port in Tripoli played a crucial role in maintaining Lebanon’s economy. With Beirut port receiving 70 percent of all the country’s imports before the incident, many observers expected Tripoli’s smaller port to falter. But the northern port, known for its vital role as a transit point for sea trade to Iraq and Syria, stepped in fully for Beirut, taking on a vital economic role for the country. The quick response and efficient flow of goods into Tripoli saved Lebanon from an impending food crisis, said Tripoli’s port authorities, and kept the small Mediterranean country’s already-struggling economy afloat.

From August 4-12, Tripoli’s port became the main destination for ships carrying general cargo and containers carrying everything from food, medicine and building materials to Lebanon. “Tripoli’s port was working at only 40 percent of its capacity before of the incident,” said Ahmad Tamer, general manager of Tripoli’s port, explaining that years of political instability in the region – and more recently the coronavirus pandemic – had significantly slowed down the economy.  “And so when the blast hit, we were more than capable of filling in for Beirut,” he said.

He added the redirection of Lebanese imports to Tripoli helped ensure that Lebanon did not go hungry. With about 85 percent of Lebanon’s wheat supply usually coming through Beirut’s port, the United Nations’s food programme had predicted the country would run out of bread in two-and-a-half weeks after the blast. But that was not the case. “Everyone expected a wheat crisis, but we filled in and received the shipments,” said Tamer. Tamer explained that although Tripoli’s port is relatively smaller compared with Beirut’s, its “logistical infrastructure and services” were advanced enough to allow it to manage the instant increase in the volume of goods.

Despite this, the coronavirus lockdown has been a major obstacle to a smooth economic recovery in Lebanon. Now, merchants and business owners in Lebanon plan to defy a coronavirus lockdown, saying they can no longer afford to keep their shops shut amid a deepening economic crisis that has plunged more than half of the population into poverty. “We will not be able to keep our stores closed for another day due to the terrible economic situation,” said Nicolas Chammas, chairman of the Beirut Traders Association, which on Monday requested the Ministry of Interior to allow the return of commercial business activity from Wednesday. Starting on August 21, Lebanese authorities imposed a 17-day lockdown to stem the spread of the coronavirus pandemic after the number of confirmed infections spiked in the wake of a massive explosion that ripped through Beirut on August 4. To date, Lebanon has officially registered 13,255 COVID-19 cases and 126 related deaths. Chammas said the association’s reopening decision was also due to the lack of financial aid given to sustain businesses, and because most owners needed a daily revenue “to put food on the table”. “It is for these reasons that we are compelled to reopen tomorrow,” said Chammas, expressing hope that the government would consider a proposal made by the association to allow reopening for six hours.

Has the political situation changed?

Lebanon has been facing severe political problems in the form of corruption, competition, and the involvement of Iranian-backed militant group Hezbollah.

After the blast, Lebanon’s government stepped down as Prime Minister Hassan Diab blamed endemic corruption for a devastating explosion the previous week that tore through the capital. President Michel Aoun accepted Diab’s resignation and asked the government to stay on in a caretaker capacity until a new cabinet was formed. Diab owed his appointment late last year to public anger with the ruling elite, but in the end fell victim to it. Heading what was billed as a government of “technocrats” experts supposedly above Lebanon’s complex and murky political fray he was tasked with rescuing the country from its worst economic crisis since the 1975-1990 civil war. Promising a new style of governance, the American University of Beirut (AUB) engineering professor and former education minister described himself as “one of the rare technocrat ministers since Lebanon’s independence” in the 1940s. But anger quickly grew as the coronavirus pandemic only worsened the country’s economic collapse and Diab’s government, having defaulted on Lebanon’s debt, also failed in its negotiations for an IMF bailout.

The Beirut blast has significantly amplified the deep problems that are present in the Lebanese political scene. Since October, there have been mass demonstrations demanding the departure of the entire sectarian-based leadership over entrenched corruption, incompetence and mismanagement. But the ruling oligarchy has held onto power for so long – since the end of the civil war in 1990 – that it is difficult to find a credible political figure not tainted by connections to them.

Diab’s resignation could either be the first step to historical political reform, or another stage in the same cycle that has been going on for decades, and that repeated itself when Diab replaced Hariri.

Now, an influential group of former Lebanese prime ministers has picked little-known diplomat Mustapha Adib to head the country’s next government, all but ensuring his appointment at a nomination process on Monday. Fouad Siniora, speaking on behalf of the group which met on Sunday, said Adib should rapidly form a government capable of implementing long-overdue reforms and overseeing Beirut’s reconstruction following a massive explosion that killed at least 190 people and damaged large parts of the capital earlier this month. The group of four former prime ministers represents the largest number of Sunni Muslim MPs in Lebanon’s parliament, including the Future Movement bloc of former Prime Minister Saad Hariri. Their support is seen as essential for the success of the prime minister, who under Lebanon’s sectarian power-sharing pact must always be Sunni. Former Prime Minister Hassan Diab had the support of just a handful of parliament’s 27 Sunni MPs in addition to little popular support.

Furthermore, Hezbollah is open to discussing a “new political pact” in Lebanon, proposed by French President Emmanuel Macron, the head of the powerful pro-Iranian group, Hassan Nasrallah, said on Sunday.

It is still too early to say whether the latest political moves are a sign of positive political reform. However, there are positive signs of economic recovery and possible political change