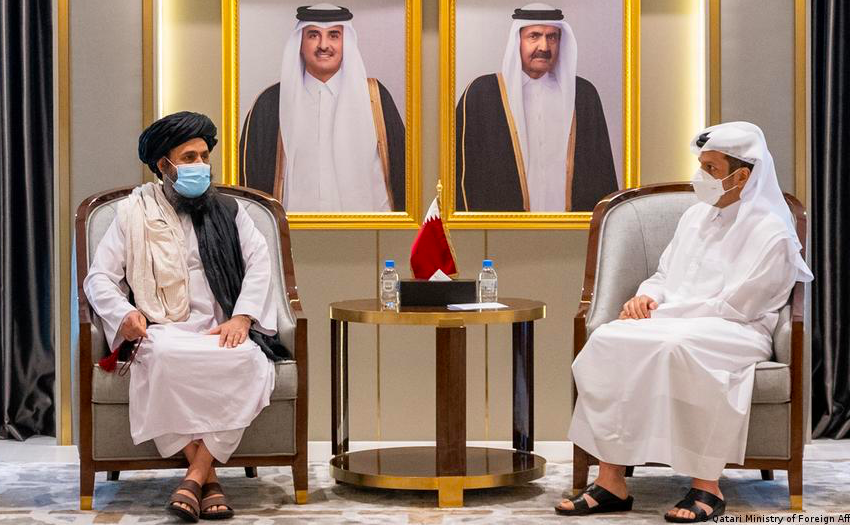 Technical teams from Turkey and Qatar are working on getting all possible flights from Afghanistan’s Kabul Hamid Karzai International Airport restarted, the Taliban said Monday.

Qatar is working with the Taliban to reopen Kabul’s airport as soon as possible, its foreign minister said on Thursday, urging the Afghan group to allow Afghans to leave.

The airport, the scene of a frenzied evacuation which ended with the US troop withdrawal on Tuesday, is out of operation with much of its infrastructure degraded or destroyed.

“We are working very hard (and) we remain hopeful that we will be able to operate it as soon as possible,” said Qatari Foreign Minister Sheikh Mohammed bin Abdulrahman al-Thani.

“Hopefully in the next few days we will hear some good news,” he told a news conference in Doha.

A Qatari technical team flew into Kabul on Wednesday to discuss reopening the airport, the first plane to land there since the evacuations.

A source with knowledge of the matter said the goal was to resume flights both for humanitarian aid and to provide freedom of movement, including the resumption of evacuation efforts.

The possibility of Turkey and Qatar operating the Kabul airport is still under discussion, NATO Secretary-General Jens Stoltenberg also said Friday adding that the alliance would seek to evacuate more vulnerable Afghans and maintain contact with the Taliban, but that Afghanistan’s new rulers would have to show themselves worthy of aid and recognition.

It was also reported Monday that the Taliban that seized power in Afghanistan have invited several countries, including Turkey and Qatar, to take part in an event dedicated to the announcement of the composition of the new Afghan government, the group’s representative whose name was not revealed told the Al-Jazeera TV channel.

“We have sent invitations to Turkey, China, Russia, Iran, Pakistan and Qatar to take part in the (ceremony) of announcing (the composition of the new Afghan) government,” he said.

The significance of a Qatari plane being the first to land on the Kabul airport under Taliban rule must be underlines, and signifies the important role Qatar has built for itself in Afghanistan.

How Qatar reached this point

The Qatari aircraft landed last Wednesday carrying a technical team to discuss the resumption of airport operations after the Taliban takeover of Afghanistan. It was a part of the efforts led by Qatar and Turkey to resume flights for both humanitarian aid and to provide freedom of movement, including the resumption of evacuation efforts.

Just a few days ago, US President Joe Biden picked up the phone to thank the Emir of Qatar, Tamim bin Hamad Al Thani, for the generous support in the ongoing evacuation from Afghanistan.

Biden also thanked Qatar for facilitating intra-Afghan talks — even though they had failed even before the Taliban took power.

Germany, meanwhile, criticized Qatar after the Taliban’s political leader, Mullah Abdul Ghani Baradar, was flown to Kandahar from Doha by the Qatari Air Force, days after the Islamist militants had swept across the country.

The relationship between Qatar and the Taliban is anything but new. As early as 2013, Qatar allowed the Taliban to open an office in Doha, with the support of the US administration under Barack Obama.

At the time, Washington was looking for a neutral place to negotiate with the Islamist militia in order to prepare the withdrawal of troops from Afghanistan.

“Qatar was able to leverage the relationships it has built up with the Taliban… and the United States and other NATO states, to position itself as the middleman… and thereby facilitate the evacuation process in ways that virtually no other regional state could have hoped to do,” Dr Kristian Ulrichsen, a fellow for the Middle East at Rice University’s Baker Institute told TRT World.

Qatar’s role was somewhat unexpected. A nation with a little more than 300,000 citizens, was supposed to be a transit point for just a few thousand people airlifted from Afghanistan over a timeline of several months.

After the surprisingly swift Taliban takeover of Kabul on August 15, the US looked to Qatar to help shoulder the evacuations of tens of thousands in a chaotic, messy and hurried airlift.

In the end, Qatar, the host of the biggest US military base in the Middle East, has been a major gateway for around 55,000 people airlifted out of Afghanistan, nearly half the total evacuated by US-led forces after the Taliban’s swift victory amid a US withdrawal.

With a few hundred troops and its own military aircraft, Qatar has conducted rescue efforts while Kabul fell into the hands of the Taliban. Qatar Ambassador to Afghanistan Saeed bin Mubarak Al Khayarin helped thousands of Afghans to get through the Taliban and American checkpoints as well as the desperate crowd of Afghans encircling the airport.

While the Biden administration insists on denying the tragic failure of the evacuation, and distrust has grown among the NATO allies over the US’ global leadership, Qatar has won its leadership praise from Washington DC.

Dr Andreas Krieg, Associate Professor at King’s College London says over the years the Taliban have come to recognise Qatar as a trusted, neutral broker, providing Doha with a near-monopoly on access to the group.

“This trust and influence has been used by the Qataris to ensure that the Taliban are not interfering with the evacuation process and allow the US withdrawal to go as smoothly as possible given the circumstances,” Dr Krieg told TRT World.

Doha over the last decade forged balanced ties with the Taliban’s  political leadership as it has hosted exiled Taliban officials and their political office. As a US ally, Qatar has become a trusted mediator, initiating peace negotiations among the US, the collapsed Afghan government and the Taliban.

Doha brokered the deal for the exchange of hostages seven years ago between the US and the Taliban, enabling the release of American Bowe Bergdahl.

Qatari officials, while on one side urge the Taliban to form an inclusive and ‘moderate’ government, are trying to convince the US and Western partners to cooperate with the new rulers of Afghanistan.

Dr Krieg says maintaining ties with the Taliban is a win-win for both Doha and Washington.

“Hosting the Taliban was always about buying credit in Washington so the Qataris use this relationship to assist the US strategy. The US, however,  does not seem to object to Qatar maintaining and even deepening their engagement with the Taliban as this relationship between Doha and the Taliban is a strategic asset,” Krieg said.

He added, “If we are starting to put conditions and stopping this engagement, we are going to leave a vacuum, and the question is, who is going to fill this vacuum?”

However, analysts say although Afghanistan was always seen in Doha as an opportunity for engagement with Western partners and hosting the Taliban became an important diplomatic lever that Qatar learned how to use effectively. Doha’s role as a mediator could bring some risks to the tiny kingdom.

“No-one has been able to do any major evacuation process out of Afghanistan without having a Qatari involved in some way or another,” explains Dina Esfandiary, a senior adviser at the International Crisis Group, a think tank which studies global conflict.

“Afghanistan and the Taliban will be a significant victory for [Qatar], not just because it will show that they’re able to mediate with the Taliban, but it makes them a serious player for the Western countries that are involved,” she told the BBC.

As Western countries fled Kabul, the diplomatic value of these contacts surged. The Twitter feed of Qatar’s Foreign Ministry spokeswoman, Lolwah Alkhater, reads like a conveyer belt of retweeted tributes from world powers.

“Qatar… continues to be a trusted mediator in this conflict,” she wrote earlier this month.

Nevertheless, Dr Ulrichsen warns, “should hardline factions within the Taliban win any internal power struggles within the movement and subsequently try to rule Afghanistan through brutal coercion, then there is a risk that any association with the group… will rebound negatively.”

Meanwhile, it appears the UAE is trying to counter Qatar’s growing and prominent role in the new Afghanistan, as it is trying to establish its own logistical basis and explore ties with the Taliban.

The United Arab Emirates has sent a plane carrying “urgent medical and food aid” to Afghanistan, according to the official WAM news agency, nearly three weeks after the Taliban took over the control of the country.

The “assistance comes within the framework of the humanitarian role being played by the UAE to provide full support to brotherly Afghan people in such current circumstances”, WAM said on Friday.

The UAE foreign ministry confirmed to the AFP news agency that “this is the first [Emirati] aid flight since the recent events in Afghanistan”.

The Gulf country was one of the only three countries in the world to recognise the Taliban during its previous rule between 1996 and 2001, a leverage it may use over its competitors including Qatar.

The UAE is one of a number of Gulf states that have been instrumental in staging posts for evacuation flights for foreigners and Afghans.

The Islamist group, which took power in Afghanistan in late August, is expecting further aid deliveries from the UAE.

The relations between the two countries could benefit the Afghan economy after the international community decided to suspend funds designated to the reconstruction of the war-torn nation, which represented some 43% of Afghanistan’s GDP, according to the World Bank.

The Taliban will invite all the help it can receive, especially with potential economic investors like the UAE, who already have a strong geopolitical standing in the region, however, the Taliban’s ties with Qatar remain more deeply rooted, and it is unlikely that the UAE will effectively counter Qatar’s expanding role in Afghanistan in the coming years. 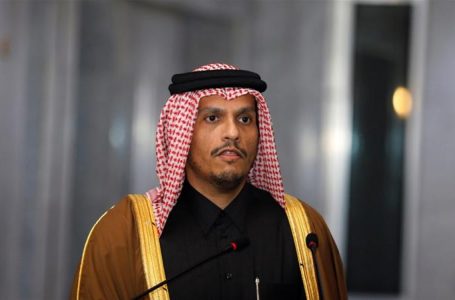 Have Qatar-GCC talks broken down? 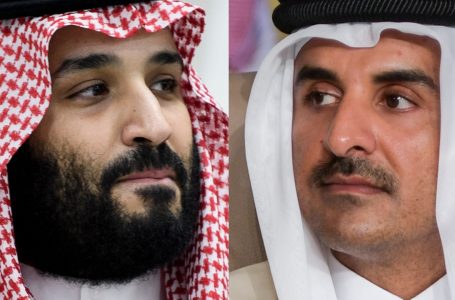 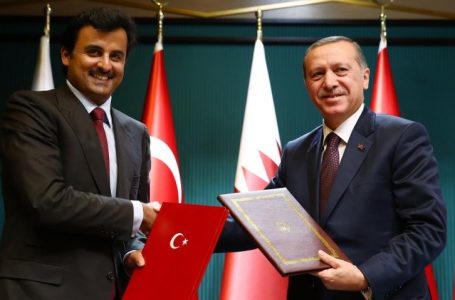