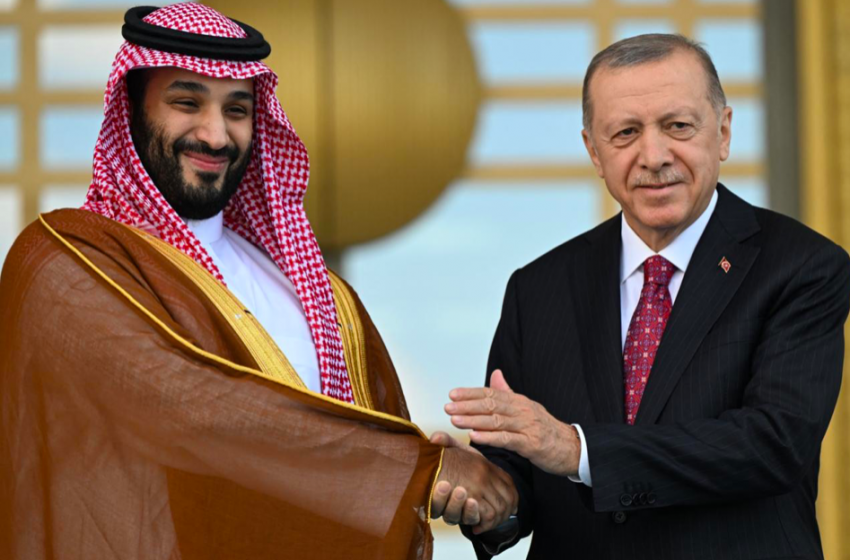 Saudi Crown Prince Mohammed bin Salman (MBS) visited Turkey for the first time in years for discussions with President Recep Tayyip Erdogan, with the goal of totally normalizing ties that were severed following the murder of Saudi writer Jamal Khashoggi inside the Saudi consulate in Istanbul in 2018.

Erdogan greeted Prince Mohammed with a ceremony at the presidential palace in Ankara, where the two shook hands and embraced before being greeted by members of the Turkish government.

Following the meetings, the two nations issued a joint statement emphasizing their desire to usher in a new era of bilateral cooperation.

MBS’s visit is part of a trip that began earlier this week with visits in Egypt and Jordan.

Prince Mohammed has been leveraging Saudi Arabia’s vast wealth and oil production capacity to soften criticism of the country’s human rights record. In turn, Erdogan is seeking financial support that could help relieve Turkey’s beleaguered economy ahead of tight elections for the presidency, expected in 2023.

The trip is expected to bring “a full normalisation and a restoration of the pre-crisis period”, a senior Turkish official told Reuters news agency. “A new era will begin.”

The Turkish official said the two countries had lifted restrictions on trade, flights and the screening of TV series, with mutual negative media coverage also halted.

However, he said negotiations on a possible currency swap line – which could help restore Turkey’s diminished foreign reserves – were not moving “as fast as desired” and will be discussed privately between Erdogan and Prince Mohammed.

The two countries also discussed improving cooperation in trade and sectors such as defence, energy and tourism among others, the joint statement said. It added that Ankara invited Saudi investment funds to invest in Turkish startups.

Turkey’s economy is badly strained by a slumping lira and inflation soaring beyond 70 percent. Saudi funds and foreign currency could help Erdogan tame this situation and possibly gain support ahead of elections, analysts say.

Turkey has in recent months shifted its foreign policy especially towards its Middle Eastern neighbors towards a more reconciliatory stance, pushing for strong economic relations with all the major players in the Middle East, including Israel, the UAE and Saudi Arabia, sacrificing certain geopolitical boiling pots that had up to now clouded ties between Turkey and these states.

These visit of MBS followed the landmark trip to Turkey in March by Israeli President Isaac Herzog. The visit of Herzog, whose position is largely ceremonial, was the first since that of Shimon Peres in 2007 and was instrumental in the advancement of the rapprochement process. The announcement of Herzog’s visit to Turkey came when Erdogan was on a historic visit to the UAE in mid-February. That month Herzog also visited the UAE, which normalized ties with Israel under the Abraham Accords in 2020. Herzog’s trip to the UAE highlighted the burgeoning relations between the two countries, as they each brought to the table several issues for cooperation, of which Turkey may also be a part.

Since 2020, Turkey has engaged in an intense effort to rebuild trust and deepen official dialogue channels with both Israel and the Gulf states in a way that would bring mutual benefits. First the COVID-19 pandemic, then the rapprochement climate in the region, and finally the Russian invasion of Ukraine made it possible for Turkey to open a new chapter in its relationships with former foes.

Lapid’s visit to Ankara came amid political turmoil in Israel. The Israeli parliament voted to dissolve itself after the fragile governing coalition proved untenable, and Lapid will succeed Naftali Bennett as interim prime minister until elections at the end of the year. Despite this, Lapid’s visit to Ankara focused on ways to improve cooperation with Turkey, especially in the realm of security. Lapid thanked Turkey for its efforts in arresting an Iranian assassination squad plotting attacks on Israeli tourists in Istanbul.

Iran remains a key motivator in Israel and the Gulf states’ mending fences with Turkey. From Turkey’s perspective, Iran remains a threat, as pro-Iran militias have attacked Turkish positions in Iraq, while Ankara and Tehran support different sides in Syria. Turkey stands at the same point with Israel and Gulf states when it comes to Syria, Iraq and Yemen. In meetings with Gulf leaders, Erdogan had several times restated Turkey’s support for the stability of the Gulf region and condemned the Houthi attacks against the Gulf states. Seen from Ankara, Tel Aviv and the Gulf capitals, the proposed revival of the Iran nuclear deal reflects a softened US stance, risking Iran’s comeback on the international and regional stage. Therefore, they find common cause in collaborating to contain potentially rising Iranian influence.

Israel and the Gulf states are attempting to create a new equilibrium in the region, where Iran and its proxies will be limited. They aim to integrate Turkey into the new security architecture and use its military muscle. Biden visit both Israel and Saudi Arabia next month, and also meet leaders of the other GCC states, plus Egypt and Jordan.

Many see this visit by MBS and its consequences as a start of a new era in Turko-Saudi relations, establishing a bond and force that could lead the Middle East’s geopolitical trajectory for years to come. But is this necessarily true or is this an overemphasis on the significance of the visit?

While the general atmosphere accompanying the visit was positive, one could not help but observe several issues that sent contradictory messages.

For example, some of the official Saudi media outlets decided to select and release inappropriate photos of MBS and Erdogan. One photo was taken while the Turkish president was not fully ready for the picture, and in a position that showed him looking subdued compared to a jubilant MBS. Such moves will certainly not bode well with the Turkish president.

The photo was first released by the Saudi Press Agency and featured on the front page of the Saudi Arab News newspaper. Several observers interpreted it as an embedded message to the Turkish side.

Apart from that, despite its importance, some aspects of the visit seemed largely ceremonial. It represented announcing the dawn of reconciliation rather than moving relations to the next level. In short, the visit was concise.

The time between the welcoming ceremony of MBS and his departure from the airport was less than four hours, meaning there was not enough time to discuss substantial issues in-depth, let alone to discuss matters of common interest between the two countries’ delegations.

Interestingly, the statement itself was more of a general declaration of intent rather than an actual agreement on concrete issues or an action plan. Interestingly, only a few observers noted that there were two versions of the joint statement released within one hour of each other. After examining the two documents, revisions concerning four domains – economy, climate change, tourism, and foreign-regional policy – could be noted.

While stressing the importance of cooperating in the field of tourism, the updated version of the statement deleted a sentence demanding an increase in the number of flights between the two countries. Third, and most importantly, the updated version of the joint statement omitted the signatures of the Saudi and Turkish foreign ministers from the last page. It is devoid of any signatures or official names at the end of the document.

While most can be attributed to last-minute arrangements, the nature of some of these modifications do not reflect strength, resolve, or confidence. On the contrary, they actually seem to reflect caution.

The updated version lacks official names or signatures, which might be a Saudi way to evade being officially committed to obligations that may not fit Riyadh’s preferences later. The Saudis have a track record of not following up on the agreements they sign. The fact that the joint statement itself called for reactivating previously signed agreements between the two countries in the field of defence is a strong indicator of this.

While the visit marks the normalisation of relations between the two countries, it does not immediately display a strong push towards moving them to the next level yet. Actions rather than statements in the coming period will help clarify whether a genuine will to overcome caution, strengthen bilateral ties, and move forward actually exists. For now, we are far from the stage of calling this a ‘new era’ in relations, but this is definitely a step towards normalization.