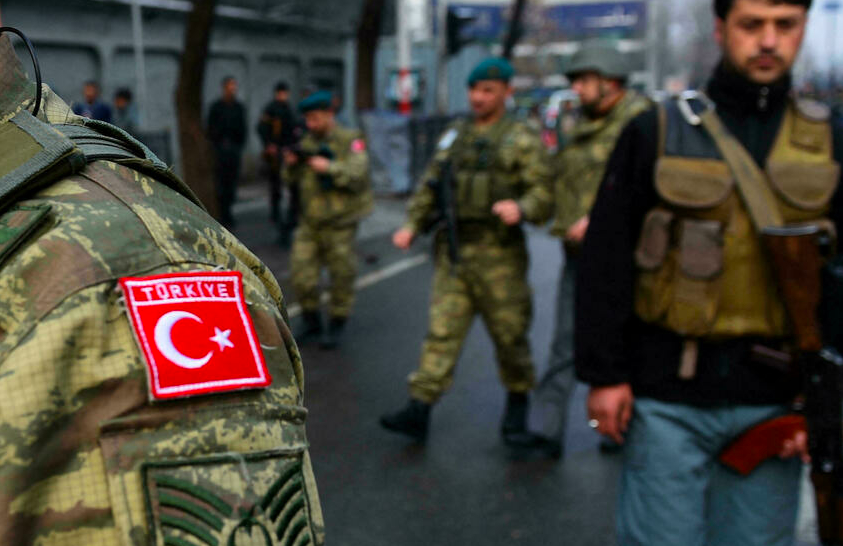 The Taliban initially strongly voiced their opposition towards announced plans of an increased Turkish military presence in Afghanistan.

“The decision… is ill-advised, a violation of our sovereignty and territorial integrity and against our national interests,” the group said in a statement, days after Ankara agreed with Washington to provide security for Kabul airport when foreign forces leave next month.

“We consider stay of foreign forces in our homeland by any country under whatever pretext as occupation,” the Taliban said.

“The extension of occupation will arouse emotions of resentment and hostility inside our country towards Turkish officials and will damage bilateral ties.”

The security and smooth running of the Hamid Karzai international airport in the Afghan capital is crucial for preserving diplomatic missions and foreign organizations operating out of Kabul, where a bomb explosion Tuesday killed at least four people. Hostilities elsewhere in Afghanistan also have escalated to record levels.

Turkish Defense Minister Hulusi Akar told reporters after a cabinet meeting on Monday evening that Turkey agreed to some points with U.S. counterparts on running the airport.  He said work towards a deal continues.

“If the airport does not operate, the countries will have to withdraw their diplomatic missions there,” Akar said.

Taliban forces have dramatically extended their territorial control across Afghanistan by overrunning scores of districts without any resistance since U.S. troops formally started withdrawing from the country in early May.

However, possibly due to Turkish efforts to make use of diplomatic channels with the Taliban, the Taliban have opened up to Turkey in recent days.

Taliban spokesperson said Wednesday that the group has asked Muslim countries to support a political solution that will end the war in Afghanistan, adding specifically that the group wishes to maintain good relations with Turkey.

Zabihullah Mujahid argued that the solution to the current problem in Afghanistan is an “inclusive” Islamic government and said the group wants to work with other countries to restore peace and security and start a rebuilding process.

“We want good relations with Turkey, Turkey is our brother, we have many points in common based on faith. We want Turkey to leave the past and return to the present and the future. After that, we can ask for dialogue,” Mujahid told TRT Arabi, the Arabic broadcasting service of Turkey’s public broadcaster, TRT, during an interview that touched on the withdrawal of foreign forces from Afghanistan, the operation of Kabul Hamid Karzai International Airport and peace negotiations between Afghan parties in Doha, Qatar.

On an Afghan peace conference that is expected to be held in Istanbul, he said the Taliban evaluated every opportunity to bring peace to Afghanistan and the region.

The much-anticipated peace conference was scheduled for the end of April but was postponed.

He noted that ensuring the security of the Kabul airport, diplomatic missions and embassies is the responsibility of Afghans and that the Taliban will consider any other move as an intervention in the country’s internal affairs.

Turkey’s president said Tuesday his country will talk with the Taliban regarding Turkey’s bid to operate and secure the airport in the Afghan capital, Kabul.

“This process will also be discussed with the Taliban,” he said, adding that the group had previously negotiated with the United States and “should hold these talks much more comfortably with Turkey.”

He stressed that Turkey has always stood with Afghanistan, saying “imperial powers” have been there for decades, including in the past 20 years — an apparent reference to the U.S. deployment that is drawing to a close.

There thus seems to be an opening on both sides, leading to an increased possibility of Turkey gaining an important foothold in Afghanistan.

Refugees increasingly an issue for Turkey

Turkey’s ambitions in Afghanistan could be further amplified in the next months, due to an ever growing problem of Afghan refugees flowing into Turkey. It is therefore increasingly in Turkey’s interest to ensure a swift end to the Taliban’s war with the Afghan government, causing this refugee flow, and an added impetus to push for their planned operation of the Kabul airport.

The fresh influx of Afghan migrants to Turkey shows how the U.S. military drawdown in Afghanistan is rippling through the wider region. Ahead of the Aug. 31 deadline set by President Biden to withdraw U.S. troops from the country, the Taliban have seized swaths of the Afghan countryside and are threatening some cities. Civilian casualties surged in the first half of the year, according to a United Nations report.

Turkey is the world’s biggest host of refugees and is home to approximately 4 million: the majority are Syrian, at 3.7 million, but Afghans make up the second biggest group. In 2020, 23,000 Afghans applied for international protection in Turkey, according to data available on the directorate general of migration management’s website.

Earlier this week, the Turkish interior ministry spokesperson, İsmail Çataklı, sought to downplay reports of a fresh wave of refugees, saying video and photographs of long lines of people walking in single file along roads in Iran, just 700 metres from the Turkish border, did not mean they would be able to enter Turkey.

Ongoing work to put up security walls, observation towers, floodlights and wireless sensors along Turkey’s borders with Iran and Iraq were 90% complete, he said, adding that “when the project is completed, terrorism, illegal crossing, smuggling, cross-border crimes will be prevented.”

The journey, like many migration routes, is extremely dangerous. As well as border defences and the threat to women of sexual violence from smugglers and fellow travellers, overcrowded and unsafe transport has led to deaths and drownings in Turkey. At least 12 people were killed last week after a smuggler’s minibus overturned on the highway, and 60 people drowned after an unseaworthy boat capsized on Lake Van last month.

Nevertheless, as the Taliban continues to take swathes of land in Afghanistan, the flow of migrants to Turkey will grow significantly, meaning Turkey has an increasingly urgent incentive to enhance negotiations with the Taliban and their scope. They will therefore see the Taliban’s recent change of stance as a positive step in this direction.